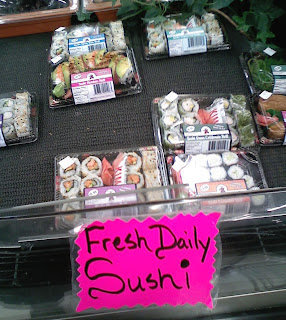 Local sushi lovers are relatively spoiled when it comes to finding top notch dining out options, but it wasn’t always that way. Takara first introduced the idea to downtown Coeur d’Alene in 1992 and they remained the area’s sole provider of Sashimi and Maki Rolls until about midway through this decade when sushi bars began popping up faster than you can say “Domo Arigato Mr. Maguro.”

Bonsai Bistro, Syringa , Fisherman’s Market, Japan House and Sandpoint’s Oiishi are all great sushi spots, but there are times when a formal dining affair isn’t really feasible and that yen for sushi just won’t cease. Perhaps insomnia has you up in the wee hours toying with the idea of ordering a Ped Egg when suddenly you’re stricken with the urge for Unagi Eel. Or maybe you just want to emulate Molly Ringwald in “The Breakfast Club” and impress your lunch break pals with your flair for the exotic.

Thank Buddha for the convenience of pre-packaged, ready to eat supermarket sushi, now available in the deli sections of pretty much every big-name grocery store in the region. While there’s certainly nevery any real comparison between the readymade variety and the real deal, there are some passable and even entirely edible options available in the fluorescently lit display coolers of North Idaho.

I think I first spotted supermarket sushi locally at Safeway, first at the mega-deli inside the Neider location and later on at the old-school vintage model Safeway downtown, which is my daily grocery haunt. A California-based company called Fujisan is the actual party responsible for the “sushi product” sold in our local Safeway stores, and it doesn’t take a lot of experience with real sushi to realize that what Fujisan makes is a far cry from it. It’s like the difference between a wedge of Brie and a spray can of Cheez Whiz.

Both the connoisseur and the curious realize that the most important aspect of good sushi is freshness, and what Safeway offers just doesn’t quite cut it. It's clear from the expiration dates that he 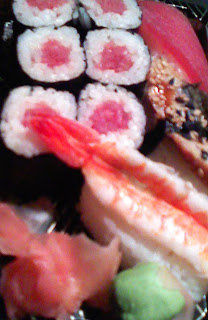 Fujisan truck arrives from Seattle about once a week, and even on arrival day these rolls seem somehow lackluster. Things turn even grimmer after they’ve sat around a few days, when the rice begins to absorb the orange stain of the carrots and the avocado goes mushy brown. Also, every piece is unnaturally identical as if mass produced by machines rather than hand rolled with love.

Still, desperate times call for desperate measures and I’ve learned that with enough soy sauce and wasabi, Safeway sushi tastes slightly better than it looks. Their basic California roll is do-able if fresh, but avoid the Surimi Roll, which is filled with a gloppy Krab-mayo salad and is unpleasantly sweet with a slightly fishy aftertaste. I’ve noticed a small selection of Fujisan trays recently at local Albertsons stores as well, possibly for deli-goers burned out on Cheap Chicken Mondays.

Super 1 Foods’ sushi has much more to offer in terms of freshness and quality. Even visually, it’s closer in spirit to restaurant sushi. These eye-catching assortments are hand assembled and most include several different varieties of nagiri and maki style sushi, as well as the ever-popular California roll and even Inari, which is rice inside fried tofu. The giant Rainbow Roll is decorated with slices of avocado and drizzled with a tangy sauce. I like their Mini-Pack Tuna Combo, which included a small, tight tuna roll cut in 6 sections and a piece each of maguro, unagi, and ebi (tuna, eel, and shrimp).

According to the sticker on the package, Super 1 sushi is made fresh daily in Spokane by “Eson Gib” (read it backwards) with no further info other than a phone number. Intrigued, I called and reached a slightly confused woman with a very thick Asian accent. “I got your number from my sushi tray,” I yelled into the phone. It seemed to take a few moments for her to understand. “Ah yes, Super 1”, she finally said. I awkwardly attempted some small talk but it was clear we had a language barrier in effect so I just told her “my compliments to the chef” and said bye-bye. I have an image of this kind woman in my head, faithfully awake at 4 a.m. every day, greeting the fresh fish man and expertly assembling sushi trays exclusively for area Super 1 stores. I can't vouch for the accuracy of this soft-focus fantasy, but have no reason to believe otherwise. 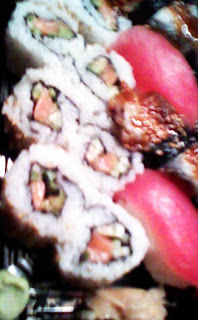 Word is that Fred Meyer has an actual sushi chef on site during the day, although I’ve never been early enough to catch the action myself. Even the after hours selection is quite fantastic; with good sushi, the fish should gleam and visually tell you that it was swimming happily until very recently and Fred Meyer succeeds on that level alone. The freshness is even more apparent in the flavor. My “Shoreline Combo” contained a spicy tuna roll and four pieces of nigiri; salmon, tuna, eel, and yellowtail.

It’s pretty good stuff, it's quality comperable to sushi I’ve been served at actual Japanese restaurants. Accompanied by an ice-cold bottle from their large selection of Sake (I like Sho Chiku Bai), it's a refreshing meal for hot summer days when actual cooking seems like a rare, sweaty form of torture.

Best of all, the Fred Meyer deli clerk provided one of those rare moments of great customer service. I feared the small plop of wasabi provided just wouldn’t cut it; I like a lot of the green stuff. So I offered to purchase another little plop. To me, it's that intense horseradishy head buzz that makes the sushi experience so sublime and addictive. She had to dig around to even find the wasabi vat, but she did it with a smile and scooped out enough to last ten rounds, no charge. This unexpectedly kind gesture instantly charged my mood much like the heat of the wasabi itself charged my tastebuds, causing my eyes to well with tears.
Posted by Patrick Jacobs at 12:01 AM

I have had the real stuff also--even in exclusive clubs in Tokyo. I'm with the South Carolina-ian's. They have another name for sushi..."bait."

go to fred meyer north side and valley sushi bar..best in town...totally fresh

tons and tons of this I can eat!!! and I never tired of eat sushi, of course you can't eat sushi, without a good sake bottle, bring this two elements and BANSAI!

This is good because sushi is my fascination, I'd like to find more places like these because the preparation of that is totally perfect.

Yeah sushi it's delicious and in some places it's very cheap and as we know it's very healthy too if you find a nice price it's like to go to the super market for 2 weeks.