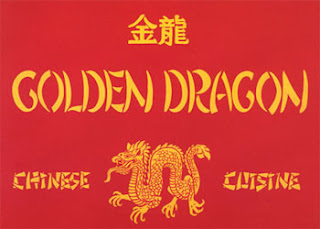 Before her untimely death a few years ago, Jimmy Woo’s was the Bette Davis of Seattle Chinese restaurants. She was sagging but legendary, tipsy and chain smoking, beloved equally by great-great uncles, drag queens and those into noir. Their tiny Jade Pagoda Lounge was home one of the most unusual jukeboxes on Capitol Hill, filled with obscure disco hits, noisy local punk, and vintage country. Red bulbs were plugged in every light fixture, making for a dark, surreal atmosphere that, after a few hours, created a form of eyestrain that would cause vampiric howls upon return to normal daylight.

When I lived over in Soggy Town, we made it our default place to meet before concerts, art happenings, Tupperware parties, whatever was on our agenda for the night. The beverages were ridiculously cheap and stiff, mixed hatefully by the bitter guy who seemed to be always working the bar. He was often blatantly rude and insulting, even to the regulars who got used to having half their drink sploshed out on the counter in angry fits of delivery. Eventually, his crankiness became sort of endearing and we realized t 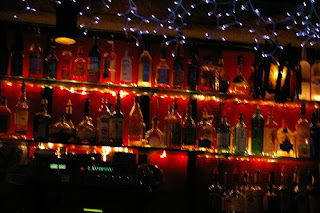 he best way to deal with him was to just hurl the cruel insults right back. “Your sour face looks like a cat’s behind, you tragic old coot.” He seemed to like this; we were on his level, our courage rewarded by a silent smirk and fully intact Cranberry-Vodkas.

There were definitely better places to eat in the neighborhood. I’d hung out at Jimmy Woo’s Jade Pagoda off and on for at least a year before I even though to actually order some food. When I finally did it was a letdown, not really what I’d expected given the ultra vivid glamour of the lounge. Merely regulation, fried and greasy, MSG-rich generica with nothing to distinguish it from tens of thousands of other joints dotting the landscape, coast to coast. It was the kind of mainstream Chinese-American chow that we’ll still eat and enjoy, but we probably won’t be sending text messages to Aunt Ethel about how simply marvelous it is. It’s the kind of merely satisfactory but not unpleasant fare served for the last ten years at the Golden Dragon on Seltice Way in Post Falls.

Nevertheless, the place clearly has a lot of local fans and I blame this mainly on the high level of customer service. When I met one of my old Jade Pagoda Seattle friends there recently for dinner, the warmly inviting wait staff seemed to know every face, and people were making themselves at home, that is if their home were a rowdy old episode of "Roseanne".

The place was full of large, talkative families who added aggressively to the overall din along with the emphatic Chinese discourse emerging from the kitchen, the cheerful gossip of the waitresses, and the syrupy Asian pop music whi 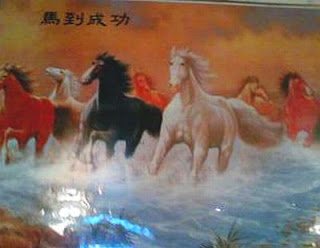 ch emanated from somewhere underneath it all. We nearly had to yell right in each other’s cochlear implants as we discussed the massive framed watercolor that hung right above us, a painting of wild horses splashing along the beach at sunset signed with Chinese characters that probably translate to something like “Under pink sky /the color of spicy shrimp/you rude/belch too loud/make wild horses run away.”

Walnut Tofu? Greenshell Mussels? Mushroom Delight with Oyster Sauce? I rolled my eyes at the thought. With my visiting pal as the lame excuse, I opted to forget my health kick for the night and order the Number 7 Combo Dinner, consisting of such Nutrisystem no-no’s as Lemon Chicken, BBQ Pork, Fried Prawns, and Pork Chow Mein. To further the debauchery, I threw in an appetizer of Fried Won Tons. “There’s no filling in those, they’re like potato chips” our waitress explained. “That’s fine,” I sighed. “Just make sure they’re as greasy as possible”. Why not make them the proper way and wrap that darned won ton around a lonely hunk of pork before its divine hot oil transformation?

And greasy they were, crisp and delicious, especially when dunked in the accompanying bowl of brown sweet and sour glaze. Our fingers were so sticky from it we had to go rinse our hands afterwards. I’ve always thought it to be tragic when Chinese places choose to render foul otherwise fine Egg Flower Soup by including overcooked mixed vegetable parts. The lima bean, it hurts deep in my spleen. The little c 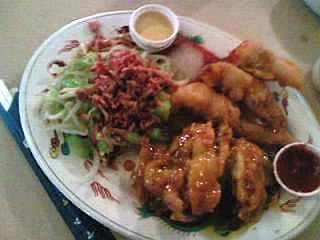 ubed carrot, come near me I dare it. The frozen corn, I greet it with scorn. I say it’s best to just keep it simple with only some green onions to let the rich chicken flavor of the broth shine.

My Fried Prawns were little golden clouds of joy, the hands-down highlight of the whole thing. Cheers to the cook for using fresh fryer oil, which allowed the batter to puff up to pancakey perfection and create a heavenly crisp outside layer. A dab of tangy red cocktail sauce adds insult to injury, as if these poor, steamy prawns didn’t already have enough to worry about.

The BBQ pork was four wafer-thin slices that were a tease, made memorable only by dipping in the mega-hot Chinese mustard that provided a few moments of sadistic delight, making our brains sizzle and tears gush forth. The Pork Chow Mein was passable, but a bit of a yawner, nothing in its monochrome pale greenness and bland dry noodles to really dazzle the tongue. Also uninspiring was the lemon chicken, with mysterious dark meat parts drowned in an over-sweet bright yellow glaze suspiciously similar to the filling in a store-bought lemon fruit pie.

No complaints, on the other hand, from my Seattle friend, who declared his Almond Chicken to be “money” and better than he remembered Jimmy Woo’s ever being. I cracked open my fortune cookie and was shocked to read the words “At sunset you will be trampled on the beach by wild horses.”
Posted by OrangeTV at 12:01 AM

Yay! You finally did it! Kudos for your latest "getting out" in North Idaho. (I personally find the fare a bit yummier, but hey, you're the foodie!)

Noteworthy utilization of tenses and additionally creative method for composing made this blog appealing. I read this blog deliberately and discovered nothing unfortunate identified with any reality. First rate work. Sichuan food