I ♥ Beauty Salons With Funny Names 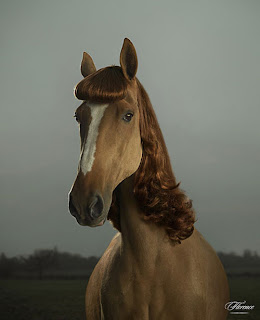 Years ago, at the Cd'A intersection where 3rd and 4th separate into one way streets, there used to be a beauty shop named "Salon de Chevaux." In High School, I took four years of French. That place used to drive my classmates and I totally bananas. See, the French word for hair is "cheveux", but whoever established the business didn't bother to spell-check or whatever and used the word "chevaux" instead, which means "horses." Salon of Horses.

We prank called them frequently, asking how much would it cost for old Nelly the Mare to get a perm and mani-pedi. They seemed blissfully oblivious to the problem, but it couldn't have helped much either, since they closed after just a few whinny-ful years in business.

Not sure why it is that so many beauty shop owners feel the need to get overly clever or cute with the names of their establishments. My personal favorite is "Curl Up & Dye" over in Spokane. I'd like to take a moment to celebrate the 15 silliest Beauty Salon names in North Idaho, in no particular order.

Redneck Nail Tech (St. Maries)
When I lived in Seattle, we used to take trips to the South Side just to amaze at how there were at least 3 nail shops on every block, and they all had names like "Bonifah and Tameka's Hip-Hop Nail Harem" or "Nặng Huyền Deluxe." I admire Redneck Nail Tech for taking the same approach and basing it's name on the local culture.

Permanent Solution (Pinehurst)
Don't do it! Things aren't that bad, there are people here that love you. You don't really want to end it all! Just get a sassy new hairdo and everything will be fine. Dump that smelly perm solution down the drain and for goodness sake, don't drink it!

La Petite (Coeur d'Alene)
You don't have to be a Paris native to know that La Petite means "The Small." This name leaves things wide open to interpretation. The small what? The small scissors? The small tips for mediocre beauticians? Do they cater primarily to "little people"?

Best Little Hair House (Wallace)
In Wallace, you probably won't find Dolly Parton singing "Hard Candy Christmas" or Burt Reynolds and Dom DeLuise hanging with the working girls. Wallace is not a 1980's movie-musical and it's not Texas either. However at one point, Wallace probably had more whorehouses than the entire state of Texas did, and that's why this name wins the "most clever" award.

Hair Tinsel (Wallace)
For those special occasions when you want to create a lasting impression by looking like a tacky Christmas tree from the 1970s.

A Shear Inspiration (Clark Fork)
Reminds me of how young Jason Sellards re-christened himself Jake Shears when he formed ultra-fab electro-pop act Scissor Sisters. If you're going to "Take Your Mama Out" in Clark Fork, I guess this is the place to get her gussied up first. Winner of the "Ha Ha So Punny" award.

Mane Reflections (Sandpoint)
Another salon, another cliched play on words. Actually, maybe here's where I can take Nelly the Mare for some mane work, something to make her gaze at it in the mirror for a while. 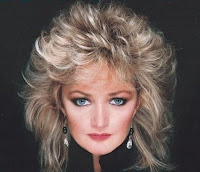 Total E-Clips (Kellogg)
As that wise sagewoman Bonnie Tyler once sang, "There's nothing I can do, a Total E-Clips of the hair." Or something like that. Also, I think an "E-clip" sounds like some kind of jazzy USB storage device. I want an electric purple E-clip.

La Tourettes (Coeur d'Alene)
Yes, I know it's the owner's name, I know he's a super nice guy, runs a tight ship, been in business for literally aeons and I shouldn't be making fun of it, but this is a classic local odd salon name and I'd be remiss if I ignored it. I can't be the only one over the years whose been slightly leery about the idea of a shampoo, cut and style at the hands of someone suffering from Tourette's syndrome. Snip, snip. "Motherfu*ker!" Tic. Jerk. Snip. "Sh*t! God-damn!" Tic. Clear Throat. Snip. Snip. Itch. Tic. "Bitch! Fu*k!" Oy! I REALLY shouldn't be making fun of people with Tourette's syndrome either. Apologies the La Tourettes for my extraordinarily bad taste, but I do enjoy going for the low fruit sometimes.

Nails Nails Nails (Sandpoint)
This sounds like what you might hear the crowd chant a few minutes before Trent Reznor and the rest of Nine Inch Nails takes the stage for a concert. Or the name of a hardware store for those afflicted with Palilalia. And I'm not making fun of them either.

Hair Zoo (Post Falls)
Might just be my own issue, but I don't really like Elephants and Gorillas roaming the salon when I'm trying to get the stylist to give me that Zac Efron look. Maybe just a zebra or two might be okay. They could be referring to the staff, in which case I'm hoping they've got the whooping cranes giving Brazillian waxes.

Jeboei (Hayden)
I dunno why, this one just plain bugs me. "Juh-boy-ee" is the official pronunciation. I even called there once just to make sure. "Juh-boy-ee!!" came the effeminate male voice on the other end of the line and I hung up on him. It's a little bit of street sass ("Holla atcha boy") mixed with some kind of unidentifiable Eurotrash attitude. Say it a few times, it'll get into your brain like an earworm and you'll walk around the house saying it over and over until you have to put on a James Brown record to get rid of it. 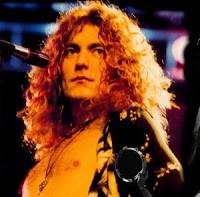 A Stairway to Connie (Sandpoint)
Ah, the mystical, magical Led Zeppelin classic. "There's a lady whose hair is the texture of straw/and she's buying a stairway to Connie." Look for offshoot salons to pop up: Houses of the Connie, The Connie Remains the Same, and of course, Connie IV a.k.a.

. Not quite as creative as The Butthole Surfers' variation album title "Hairway to Steven", which would also make a great salon name, come to think of it.

The Cutting Crew (Priest River)
Another semi-obscure 80's reference. Who doesn't love the hit song "I Just Dyed in Your Arms Tonight?" According to their website, the band Cutting Crew still tours occasionally. They must have to squeeze the concerts in between gigs in Priest River performing hair magic.

When I first moved to CDA, I asked where I could get a hair trim quickly and my new co-worker guided me to Latourette's. The foo-foo salon names had always bugged me, so I went looking for a building with some fakey little towers (well, your 4 years of French worked that one out) And yes, Steve cut my hair for years.

The other absurd names are the ones that someone tacks an accent mark onto an E, to make it seem French. I wonder why the goal is always French, never Spanish or German.

You're right, "Jeboei" is a very strange name for a salon, but here's the history behind it: The 3 stylists who originally opened the salon were named "Jeff", "Bob" and "Eileen". They took the first 2 letters from their names and combined them into the salon name "Jeboei". So there you have it.

Question: Which Inland Northwest beauty salon do you think has the silliest name?

Cute article. I also think North Idaho has so much to give to the world of hairstyling, e.g., the following local cuts:

1. Blanchard Bouffant (aka B-26) Upswept and shellacked, always accompanied by a smoldering cigarette, cup of coffee, on an old broad with firetruck red lipstick, and a tar ravaged voice like a bellydumper full of gravel.

2. Daddy's Little Orange County Peel: Daughters of filthy rich Cali imports wear this sporty little number as they slink onto the big cigarette style muscleboats of their stepfathers and drug dealer boyfriends. Easily ponytailed for those moments where a busy girl on an anchored speedboat just can't have her hair in the way.

3. Curley's Tail: Long, dry, gray braided ponytail, sometimes beaded or wrapped with old leather. ALWAYS associated with Harley Davidson riders. De rigeur at North Idaho biker bars, named after Curley's at Hauser Lake, where the view of the bar from behind looks like the backside of a stable of old nags wagging their horse tails while saddled with way too much black leather. Equally as hideous on men or women. One more compelling reason Idaho should consider a helmet law.

Ha. That's awesome, Mr.Samsa. Reminds me of that hilarious local Barbie list from a few years ago…

Of course, we need a hairdo in honor of Cd'A's most famous fashionita, Sandi B. That upswept, salt-n-pepper, Dynasty-esque thing. We could call it the “Ultra Powerful Lady Mayor.”

A girlfriend of mine who has her own salon in Iowa has named her business the Mane Tamer. She is celebrating 25 years in business this summer.

Wak n Yak Beauty Nook … This was in Omak or Okanogan some years back.

I agree w/ Herb, fun article OTV! I have a vague recollection of Salon de Chevauv, but not having taken French in HS, I did not catch the humor! What a great story! So here are a few more interestingly named salons! Barbara's Hair Em (CdA), Cut-N-Dried (PF) The Cutting Crew (Priest River) Get Nailed (St.Maries) The Hair Affair (Priest River) Knotheads Hair Salon (CdA) Some Like It Hot (CdA)
Tangles (CdA) The Tease (Osburn)

Lewiston area has a few entries for odd ones - ranging from A-Hair Ahead, Hair Port, Scissors of Awe and Hair I Am. But my entry would be Dye 'N' Style.

Thanks for the belly laughs, Orange.

There's a place on Sprague in Spokane Valley called Cartel. Everytime I drive by, I think there must be a bunch of OPEC ministers inside getting their beards and mustaches dyed.

And speaking of faux-classy French names —
Yesterday I saw a Buick Enclave SUV in the grocery store parking lot. Silly name — but better than owning the Buick Autoclave, which is the model with no air-conditioning.

My mom owned a very sucessful hair salon for 10 years called “Shear Magic”. It doesn't compare with some of the other more creative names listed here, but she did quite well until selling it to her associates.

There's a place down the street from my house (in Oakland, CA) called "Nappy or Knot" Crack's me up every time I drive by...

...I don't know much about clothes, but my hair looks fierce...

I think this is one of the most important information for me. And i am glad reading your article. But should remark on few general things, The website style is perfect, the articles is really excellent : D. Good job, cheers