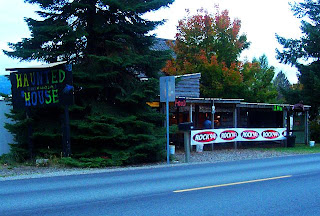 The narrow crawlspace was pitch black and the air was dank with the fetid moisture of time. I was nine years old and found myself on hands and knees slowly padding my way forward through the dusty darkness toward the unknown. The long tunnel finally led to a tiny, dirt-floored chamber in which absolutely no light existed. My friend Ricky and I, along with my mother, had waited in line for an hour in the rain to enter the abandoned, dilapidated old corpse of the Boat Drive-In Theater building in Coeur d’Alene, which had been converted into a Haunted House.

Just minutes into the experience and fear and dread were already setting in as we felt around the cement walls of the room wondering how to move on to the next segment of the journey. Time stood still as strangers crowded in from behind to join us in the silent chamber of darkness with no apparent exit. My claustrophobic mother began freaking out “Hello! Let us out of here! Heeeeelp!” and Ricky and I began to wonder the same thing, tears of panic welling up in our eyes. In her agitation, she very loudly began threatening Haunted House organizers with a lawsuit or even worse. Finally, a goblin with a flashlight pounced out of a corner with an evil snicker and nearly startled us all to death before opening a creaky hidden door into the next room, where some zombies and a token mummy were just wrapping up their coffee break and getting ready to finish us off for good.

Many years later I discovered that I had moved into an actual Haunted House, or more accurately a Haunted Apartment Building and my childhood experience in the old Boat had me fearing the worst. In reality, the actual haunting was much easier on the psyche, just some innocent disembodied footsteps in the hallway, boring old rattling doorknobs, clocks moving backwards and the usual flying objects. We merely burned some sage sticks and chased the entity away: “Follow the white light!” It was nothing compared to the cottonmouth-inducing terror of that musty old basement. With any luck, children of all ages will return home from this year’s Lions Club Haunted House in Post Falls with similarly fear-warped minds.

In fact, Post Falls Lions Club president Mike Jarrett wants to ensure that everyone comes away from the event with ice in their veins and dread in their heart. Jarrett says paradoxically that “one can expect to see lots of darkness” during their trip through the house at the corner of 4th and Post, which has served as the annual spot for the event for 25 of the last 30 years the Lions have been putting it on. Jarrett and dozens of other volunteers come together for a month or so each year to convert the already spooky Idaho Veneer building into a place that Lillian and Herman Munster might timeshare with Mr. and Mrs. Dracula when they come to relax in North Idaho and work on that perfect moon tan.

Jarrett says it’s important to change things up each year, carrying over just a few of the most popular props and backdrops from year to year. “This has to be done or we lose the support of our customers,” he explains.”I look at it like it’s our ‘Field of Dreams’. If we change it, they will come and see what’s new and different each year.” Still, the basic elements of the project remain the same, including a lot of familiar faces, both in the form of the tireless Lions Club members who volunteer and also the many reoccurring characters that the kids who staff the house portray. 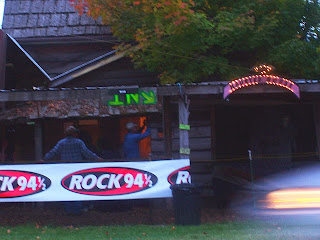 I’m pretty sure Satan will be there, along with his homegirls Vampira, Elvira, and Morticia. Expect to see lots of undead zombies, some werewolves and even a few evil psycho clowns. Set designer and make-up artist Kathy Edwards spends at least five hours each night perfecting the ghoulish appearance of each of the teenage staff members, many on loan from the Post Falls High School Band and Chorus. I’d love to hear these musical ghosts and goblins actually perform “The Monster Mash” or something, but they’ll be too busy entertaining customers by screaming their heads off and moaning and groaning in agony from beyond the grave.

The group’s efforts each Halloween are primarily motivated by the fact that all the money raised during the event goes to charitable causes. The main objective of the Lions club is to benefit sight and hearing conservation and money will also go to provide scholarships to students from Post Falls High. I had to ask Jarrett what made it “the best Haunted House in the area”, as they claim in their ads. “The fact that we've been at it for so many years and do change it around year after year.” He replied. “We put a lot of effort into it and that’s probably what the people who come year after year like and expect to see. We have to keep making it better for the customers.”

When asked to describe some of the key elements in putting together the Haunted House each year, Jarrett says “the kids acting as our ghouls are key due to the fact that we expect a lot from them and they put up with our tough expectations night after night. The customers are also vital to us because if they don't show up we can't support our various causes and most key of all are the Lions members who tirelessly show up to work on this project week after week, night after night.” He also gives a big shout out to the kids’ parents who put up with the frequent late nights, the teacher volunteers who help schedule the kids for their haunting shifts, Judy Thompson, who’s served as the ghouls’ cook for the last 15 years, and Matt Richardson a.k.a. "Ghoul Master", who makes sure the little terrors are ugly enough and ready to spook. Clearly, it takes a lot of kind-hearted folks to conjure up such a terrifically evil night.

Question: Do you go all-out for Halloween by fixing up the yard, carving pumpkins, and taking the kids trick-or-treating? Or do you simply hand out candy? Or do you ignore the event?
Posted by DFO | 18 Oct 12:56 AM

We're handing out pencils this year.

We don't really go all out at Halloween.

Sadly I say that I don't decorate for Halloween anymore since we get very few kids. But those who do come get to pick a big candy bar out of our assortment. I really miss figuring out ways to scare the kids when the come onto my porch. But they've all grown up now and take their kids elsewhere. Maybe I over did it?
Posted by Frum Helen Back | 18 Oct 9:59 AM

I remember the Haunted House in the old Showboat Drive In Theatre building. The Kootenai County Junior Miss committee (comprised of former Jaycees) used that project to raise scholarship money for the girls. It was fun, but a lot of work.
Posted by Deanna Goodlander | 18 Oct 10:43 AM

My favorite haunted house was the Rosaurs one. My mom used to work there so we'd work at the haunted house, but they had it in their storage areas and a walk through the butcher freezers where they'd hang up pig and cow heads and and place the guts in bowls.
Posted by Bree | 18 Oct 4:48 PM