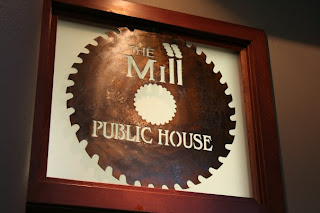 To quote that great would-be novelist Snoopy, it was a dark and stormy night. It was the first major snowstorm of the season and all the local TV weather personalities were ablaze with the threat of an imminent blizzard that would add another deep layer to the fresh six inches of the white stuff already blanketing the landscape.

I drive paranoid style in winter conditions, and cruising gingerly down Seltice Way, I’d managed to pick up a tailgating, four wheel drive lunatic behind me, swerving, headlights blazing. I was positive I was going to have to break suddenly for something, whereby I’d be neatly rear-ended and my car would go up in flames instantly like a 1978 Ford Pinto.

I finally pulled into Riverstone in an attempt to ditch Mr. Speedy Pants, and in what I now might refer to as a minor holiday miracle, I spied the glowing neon beer signs of the Mill Public House beckoning me, calling me in to soothe my shattered nerves with a frosty pint of ale.

Last August, I attended my class reunion here at the Mill, and it was also my first visit. My graduating class was huge (I attended CHS before there were two high schools in town), and several hundred tipsy thirty-somethings were packed shoulder-to-shoulder inside and out on the patio of the tiny pub. Regardless, I remember being impressed by how the minimal staff never once seemed to lose the plot and kept the cups of microbrew and glasses of wine flowing heavily and with a smile.

I’ve heard they also served a layout of mini-burgers and appetizers, but for whatever reason which I can’t quite recall (endlessly flowing microbrew), I never got a chance to fill up a plate for myself. I’ve regretted that fact ever since so I decided to remedy the situation and have a quick dinner to accompany my therapeutic ale. 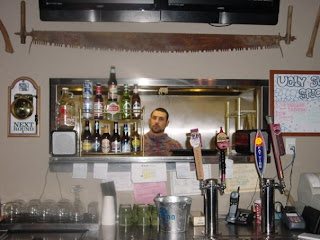 In contrast to the rowdy party crowd of my class reunion, the Mill was completely vacated, save for the girl working behind the bar and the one guy just on his way out into the storm. Still, between the bartender and the cozy, log-cabin-esque atmosphere of the place, I was greeted with enough warmth to melt the ice chunks right off my boots and make me forget all about my winter driving nightmares.

The Mill has does have the definite feel and cleanliness of a recently constructed space, but it still manages to root still itself into local history, specifically the logging era. It’s probably been a few years since chainsaws and rusty axes were considered décor, but the patch of earth the pub sits on used to be occupied by an actual sawmill, so it kind of works for them. Notably, they’re the only bar in town that serves pitchers and pints of frosty draught Hamms beer, certainly an old favorite of many long-gone Idaho loggers and sawmill workers. A fitting and “refreshing” tribute.

The Mill bills itself as a “break room” and it is a great, intimate spot for friends to gather, maybe play some disco on the jukebox, shoot some darts or attempt a game or two of shuffleboard. Live music happens on the weekends, and it’s one of very few places around where one can tackle a karaoke “Bohemian Rhapsody” on a Sunday night.

I sat down at the bar and ordered a pint of Sandpoint’s Laughing Dog Pale Ale and a “White Pine” chicken sandwich. The bartender herself dashed back to the open kitchen to prepare my food and midway through she was thoughtful enough to offer a slice of pepper jack cheese on my sandwich. It arrived moments later, along with sizzling, thick-cut herbed fries and a huge bonus onion ring riding on top. Both hit my deep-fried joy spot, but my hunger fully kicked in after the first bite of tender grilled chicken breast, spicy cheese, lettuce and crunchy red onion. Like the roadway visibility happening outside, my meal quickly vanished.

With dinner under wraps, I ordered up a pint of Moylan’s Kilt Lifter Ale to give me a bit of Scottish courage for the snowy drive home. I left the bartender to her lonesome, certain that another frazzled driver would be along any moment to keep her company and enjoy a relaxing beverage, a snack, and bit of cordial hospitality.
Posted by Patrick Jacobs at 4:52 PM