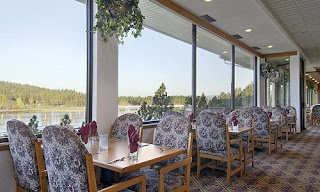 Like a dreamy soft-focus fantasy, a certain sandwich will forever occupy a special place in my head and heart. Tender sliced Ham and Turkey is covered with melted cheese on thick-sliced egg bread, then dipped in it's entirety in French toast batter and deep fried. It’s usually sprinkled with powdered sugar and must be served with a side of strawberry jelly. It’s the sandwich at it’s most refined and elegant, adding some jazz to its older, stodgier French cousin, the Croque Monsieur, a simple grilled ham and Swiss, and taking it to the outer edge of the flavor stratosphere.

The Monte Cristo first appeared on American menus in southern California in the 1950’s. Its placement on the menus of the Blue Bayou and Tahitian Terrace restaurants in New Orleans Square in Disneyland was the big Hollywood break the sandwich needed. Suddenly it became "in vogue" across the country in a golden era when 1500 calories and endless grams of fat meant nothing to anyone. Eventually, its glory days faded and currently it's a bit of a relic, a rare thing to see listed on an average menu among the BLT's and Grilled Chicken Clubs.

The Monte Cristo seemed to be everywhere we dined when I was growing up in the '70's and early 80's, and I was in love with it even back then. I fondly remember my grandparents frequently taking me to eat at TJ's Pantry, located in the North Shore Hotel, now the Coeur d'Alene Resort. Unlike its current incarnation Dockside, the place was dark and cave-like, done in weird browns and oranges and closer in spirit to a greasy spoon. I remember always enjoying a Monte Cristo with a big pile of fries, then sneaking off to play Space Invaders and ride the elevator up and down all seven floors, then a popular local pastime.

Out of the blue the craving hit recently, and it hit hard. I racked my brain, unable to even remember the last time I’d enjoyed a nice Monte Cristo, let alone where it might have been. I poked around the web looking at menus and uncovered a handful of clues. Granny’s Pantry in Rathdrum has them, but I think I’m still banished from that town. Beverly’s offers them as well, but their version strays too far into gourmet territory for me by bringing in things like Boursi 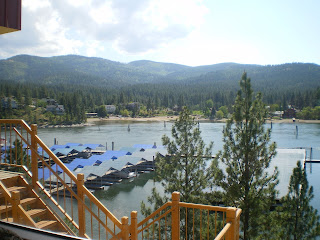 n cheese and Huckleberry-Pear butter. Finally, I was tipped off that Mallards Restaurant inside Templins Resort in Post Falls had the classic, quintessential version I was looking for.

I hadn’t been to Mallards since a random Mother’s Day approximately ten years ago, and the place remains unchanged. The long aisles of floral upholstered chairs and mirrored walls still exude a vague sense of 80’s high class, but a tell-tale layer of dust and drear makes the place cry for an update. Still, the huge bay windows face a gorgeous view of the Spokane River and provide some sunlight in the otherwise drab neo-Victorian space. We crept in during the lull between lunch and dinner on a weekday and had the entire silent dining room to ourselves. I flipped open my menu long enough to spot the magic words “Monte Cristo.” Finally, a coup!

My lunch partner was a Monte Cristo virgin and had listened to me rave about them for the previous hour, so of course he wanted one too. But I like to be able to taste a couple of different things, so I tried to get him to order something else. Mallards has a wide selection of reasonably priced breakfast, lunch, and dinner specialties and has always had a good reputation as a fine dining experience. “Mmmm, the Crab and Lobster melt sounds great, doesn’t it? How about the Black and Bleu burger, maybe some of their “famous” fish and chips,” I suggested. Regardless, my friend was stuck on playing copycat, so two Monte Cristos it was.

We felt a strange connection to Vickie, our waitress, as if she were a kindred spirit, facilitating our path toward Monte Cristo enlightenment. She’d given us a warm, all-knowing gaze when we’d ordered, and somehow guessed that we both wanted Pepsi before we even had a chance to say so. Our lunches arrived fast and we instantly dug in. One divine bite and it became clear that Vickie was our sandwich angel and that we’d died and gone to deep fried heaven on earth. It was the long-awaited realization of my dreamy soft-focus Monte Cristo childhood fantasy. 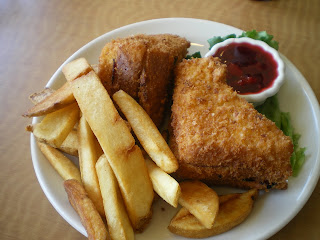 There's something cosmic about the contrasts involved. It's the warm gushiness of the inside versus the golden crispiness of the fried outer layer. It’s the cool sweetness of the strawberry jam versus the smoky ham and turkey and tang of the creamy melted layers of American and Swiss cheeses. Disney himself would be proud to be associated with the Mallards version of his favorite guilty pleasure. Likewise, the accompanying Chicken Coconut Curry soup was tremendous, filled with tender rice and just enough spice. The steak fries, nearly lost in all the excitement, were golden crisp and perfect and made a great sidekick for the star attraction.

Despite the relative heaviness of our meals, we felt refreshed and soul-satisfied, like we’d just been to some kind of exclusive spiritual retreat. “Good stuff?” Vickie asked as she cleared our empty plates and we had to laugh at her understatement. We bid her adieu and she nodded as if she knew for certain we’d be back soon for more of her inspirational Monte Cristo treatment.
Posted by OrangeTV at 12:01 AM

Question: Which waterside restaurant has a better environment for dining — Dockside or Mallards? And/or: Which restaurant would you like to see OTV review next?
Four comments on this post so far. Add yours!

Next restaurant to review? OTV, check out the Broken Wheel in Kellogg. Still fresh seafood daily (none of that pre-breaded stuff) and killer steaks.

Admission: It's owned by my ex-mother-in-law, who runs a tight but tasty ship. If you go, say hi to Betty for me.

Why would anyone want to eat at their ex-mother-in-laws establishment? That would cause indigestion.

I had dinner at Anthony's in Spokane this weekend, BTW, and the spectacle of the falls at this time of year is just stunning.

great site, keep it up the good work.