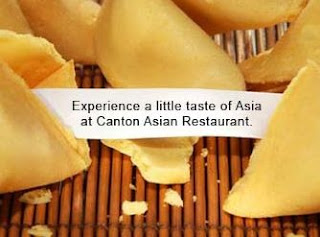 I like Chinese
Their food is guaranteed to please
A fourteen, a seven, a nine and lychees
– Monty Python

Over the last four or so years that I’ve been haunting local eateries with the intent of giving them a critical shakedown, I’ve committed to print probably more than a handful of things I would sooner or later come to feel a twinge of regret about. I look back now at some of the early reviews and it’s often apparent that I hadn’t yet learned the value of smoothing down painfully blunt snarkiness into more of a semi-pleasant verbal bruise.

Such was the case with my review of downtown Coeur d’Alene’s Canton, published within these pages in September 1997. I’ll admit, I basically mentioned every annoying cliché and bad stereotype one could possibly mention in a review of a Chinese joint. “It seems they own exactly one CD of Chinese Pop and it plays daily on repeat, as if the darned CD was somehow stuck in the player for eternity,” I wrote.

I pointed out all the typos on the menu, and although “Cram Chop Suey” and “Gried Egg Sandwich” are still kind of funny, so what? These quirks certainly weren’t unique to Canton, and obviously had no relation to my general approval of their food quality, a fact that got lost in the shuffle of my pointlessness.

Worst of all, I related a bad joke my lunch partner and I had made about the animal origin of the meat in the Korean specialty dish Bul Go Gie. What was I thinking? Canton already had earned an iffy reputation at the time from a run of bad management scenarios, and the new owner, known simply as Alex, had only just taken over the place when I pulled all this frippery. All things considered, he was one of the kindest livid restaurant owners I’ve ever had the pleasure of dealing with.

Rather than leaving the usual flaming sack of doo on my front porch, he politely replied with “I wish you know more information about what you are writing so that the readers know the truth rather than your thoughts. I don’t know how long I will be in this town but until living in this town, I will try and make better food.” I learned quite a bit from Alex’s simple and eloquent suggestion, and most tellingly, he’s still in town and Canton seems to be thriving more than ever. 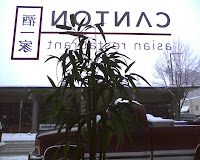 Until now, I’ve always had a no re-do policy, but it’s hard for me to think of a local eatery that deserves an updated review as much as Canton. After countless return visits, in time it’s grown from just another mediocre Chinese option in a town with many mediocre Chinese options, to the one place I tell people to go when they complain about that fact.

The cosmetic improvements alone make the Canton that I reviewed back then seem like a dusty old dive stuck in the ruins of some old Chinatown. Changes have been gradual, but Alex and staff have managed to clear up the dinginess that once lingered with simply fresh paint, a bit of modern feeling décor and most likely a lot of elbow grease. The seemingly low turnover level of servers has created a sense of familiarity and friendliness, and I never have to worry about returning late from my break after stopping in for lunch. There’s almost always enough time left over to relax and ponder the deep, hidden meaning of my fortune cookie.

But really, the most impressive difference at Canton in the last few years has been the noticeable upgrade of the food itself. Back then I wrote, “The problem lies in the unfortunate fact that they just aren’t very consistent. I’ve never been served anything truly horrid here, but sometimes it’s just bland, or slightly off-tasting, or maybe it’s been simmering in the pot too long. You never what you’ll get from day to day and this can make the place seem a little iffy.” 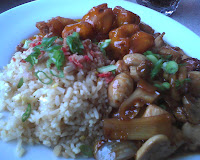 That was then and this is now because I can’t recall a time in recent memory when I was served anything less than truly delicious at Canton. As a habit, I normally order Lunch Combo A, which includes one of my desert island dishes, Almond Chicken. Their version of the classic Chinese menu staple is rich and flavorful, and unlike some other local places, their chicken is clearly chicken, no mystery involved. Canton also rises above the pack with their always noticeably fresh sides of fired rice and chow mein.

On a recent visit, I switched gears and went for Combo L-3, which introduced me to their Moo Goo Gai Pan. The combination of white meat chicken, button mushrooms, water chestnuts, and bamboo shoots in a light brown sauce once again blew my mind. The accompanying Lemon Chicken was so good it inspired my lunch partner and I to take on an endeavor we’re going to call “Lemon Chicken Wars”, which will involve sampling the dish at every local Chinese eatery to see who comes out on top. The new, improved Canton is such a winner already that it may be a pointless pursuit.
Posted by Patrick Jacobs at 11:51 AM