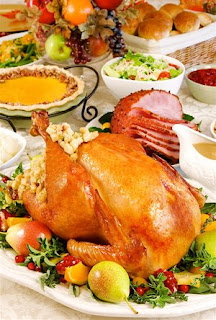 Every Thanksgiving, our family is spoiled rotten. We spend all year salivating like animals, fantasizing about the culinary joy of my mother’s annual feast. We dream of a humorously large Turkey with crisp golden skin encasing explosive moist flesh and filling the house with agonizingly wonderful aromas. We dream of butter soaked mashed real potatoes, never ever should they or would they come of out of a box. And we dream of sweet yams, baked to the consistency and color of Indian clay and blanketed with a sweet crust of burnt marshmallows.

My mother is truly a Thanksgiving Queen, but of course, at one point she was a mere Turkey Day Princess; it was my grandmother who performed the culinary magic each November for decades. As Grandma got older, merely putting together a green bean casserole became an impossible task and so she handed the hallowed recipes down to the family. It was finally revealed that my grandmother’s much speculated-about “secret” gravy recipe we’d all raved about for years was really just a few jars of store-bought generic gravy with some of the turkey goop thrown in for good measure. We were shocked. No one had ever seen so much as an empty jar. She must have worked hard hiding the evidence all those years.

A while back, my mother horrified everyone after deciding for some inexplicable reason that turkey and all the fixings were a terribly boring Thanksgiving cliché, and that Vegetarian Lasagna was where it was at. It was a killer Lasagna and everyone tried to act polite, but naturally we were left feeling unsatisfied on a basic level, like we’d arrived at Oktoberfest and were told there was no beer, only soy milk.

Last Thanksgiving, we freaked out after my mom announced she was taking the year off and that all twelve of us would be joining my grandmother in the cafeteria at Pinewood Care Center where she resides. Certainly, it was nice to spend the occasion with Grandma, who doesn’t get out and about at all these days, but the ambiance of the place was truly less-than-cheery what with so many in attendance looking quite ready to cough hard for the last time and go face-down for good into the gravy. At the time, everyone joked that I should do one of my write-ups on the place, never thinking that I’d ever actually follow through with the idea. 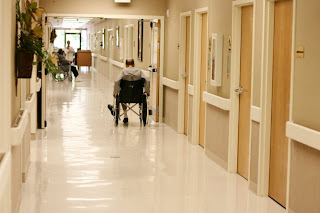 One would think that coffee would flow freely in any respectable nursing home, but for some reason at Pinewood it was like liquid gold. We asked multiple times for a nice cup of Joe to no avail, until finally my aunt and I decided to sneak off on a mission. We began sniffing down the hallways like hound dogs, hoping to pick up the scent of something hot and fresh brewed, soon realizing that we couldn’t smell a thing except that thickly antiseptic facility smell. We peeked in break rooms and lounges looking for any evidence of java but still no luck.

We returned just in time to see one of the nurses pouring a very watery brown liquid into tiny paper cups, making sure to fill each just a hair over half full. We took it like a shot of cheap whiskey, slamming our Dixie cups loudly on the folding table for dramatic effect. One of the nurses got the hint and returned a few moments later with an hygienic pink plastic mini-carafe of the weak stuff just for our table, winking proudly as if she’d managed to procure something truly rare and special.

Our meals with their round grey resin lids looked like mini-UFOs, and they began swooping in for a landing on Planet Pinewood. In an attempt to mask our disappointment about my mom’s decision to bag Thanksgiving in favor of the nursing home, we’d been joking for weeks about how potentially bad the food was going to be. I was predicting something akin to a TV dinner, something closer to Swansons than Marie Callendars. The final reality surprised us slightly, rising a few notches above our low expectations, managing to straddle the border between semi-edible and harmlessly bland. A form of Communism is alive and well in certain nursing homes, and everyone gets the same exact meal no matter if you’re rich or poor, 9 or 99, perfectly fit or crippled with disease. In order to cater to the dietary needs of the residents, there’s no trace of butter, no salt, no dairy, no sugar, no spice, no flavor.

My aunt must have dined there before. Smartly, she’d smuggled in a set of salt and pepper shakers. “Shhh” she whispered, handing them to me under the table “Don’t let anyone see these or we’ll start a riot.” I shuddered as I 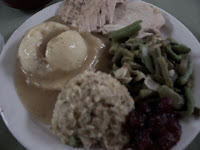 pictured flavor-starved residents attacking us with their walkers for a few sprinkles of the good stuff. All the colors on my plate seemed distinctly washed out, faded like an early color photograph. If an artist were to paint a reproduction, they’d want to put a lot of ecru on their palette, a little grey-green and a dab of drab purple for the cranberry blob.

The turkey itself was fortunately extracted from an actual turkey, rather than from a dreaded turkey loaf, and with a little of the contraband salt and pepper, tasted alright, if a bit dry. Nothing could spark life into the mashed potatoes and gravy, which were like counterfeit KFC but without the luxury of a spork. The neat scoop of cornbread dressing crumbled at the touch like a hundred-year old popcorn ball but the green beans were an unexpected highlight, still retaining most of their flavor and enhanced with chunky bits of actual bacon.

My finicky teenage cousin was so totally over the whole thing that she chose to eat only dinner rolls smeared with greasy Promise spread. I felt kind of sorry for her so I donated my roll to her cause. The wee food portions were intended for residents as well, and we cleared our plates way too rapidly, sinking with the realization that we couldn’t go back for a second or third round. Astoundingly, a nurse came through to collect our six-dollar cover charge right directly in the middle of our meal time, tapping her foot impatiently as we all struggled to dig out some cash.

A sad sliver of grocery store pumpkin pie evaporated in five bites and then it was time for me to give hugs all around and make my exit. Although the cuisine may not have been anywhere near on par with Mom’s, I left feeling roundly satisfied. I might not have become stuffed with food, but I was remarkably full of thanks to have had the good fortune to be able to enjoy the holiday together with family, no matter what location.
Posted by OrangeTV at 12:01 AM

If anyone expects institutional food fare to be good they are delusional. Guess what? You could have taken grandma home for the day and repaid her years of feeding the family Thanksgiving feasts with one from you. Then she would have probably been happier and so would you and everyone else.

You should really get the facts straight before you get too snarky. Grandma CAN'T leave the nursing home. She's physically unable to and mentally, she doesn't know if it's Thanksgiving, Easter, or Tuesday the 15th of May with her memory loss and dementia. Also, we "repaid her" with our own Thanksgiving dinner for her for many years before she couldn't come anymore, that's we decided to visit her place last year. Don't be such a grouchy pants.

I've been in Pinewood care center. I'd kill myself if I knew I was going to end up in a place like that.

As a current employee on the Pinewood nursing staff I can attest to the fact that the food is pretty bad... If you look it up, you'll find that Pinewood is above the national and state averages of long term residents who've lost significant amounts of weight. Why? Because they simply hate the food.
But at the same time if you go to a place like pinewood, or any other skilled nursing facility, expecting a great little family feast with 5 star cuisine and 5 star service than your even more out of your mind than the most far-gone resident with dementia.
I'm certain that for your Grandma the fact that the food might not have been world class quality paled in comparison to the fact that she was able to spend the evening surrounded by her family... So please, come visit your grandma every once and awhile. Even if you have to put up with bad food and foul odors. It makes a difference, trust me, I KNOW!