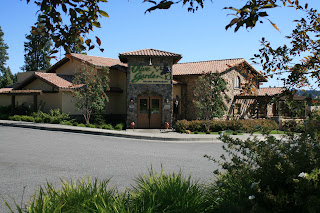 When most people think of the food at their local Olive Garden, weight loss probably isn’t the first thing that comes to mind. My stepfather likes to tell an amazing story about how he once lost over eighty pounds by eating both lunch and dinner at the ubiquitous Italian-American eatery every day for six months.

Quite a few years ago, he was single and living in Everett, Washington in a place located a quick walk away from an Olive Garden restaurant. Normally he’s a pretty fit guy, but he had managed to pack on some extra pounds and his cash flow situation was looking tight. He found the perfect solution to both problems with the all-you-can-eat soup and salad special, which provided him with two low calorie, filling and affordable meals a day. Surprisingly, he swears the staff never got tired of seeing his face twice a day and that he never got burned out on eating piles and piles of iceberg lettuce and crunchy croutons.

Although I’ve actually been fairly successful recently in my own quest to drop a few pant sizes, I had no intention of ordering merely soup and salad on a recent visit to the Coeur d’Alene Olive Garden. I’d been exhibiting dietary willpower for long enough with no slip-ups so I figured I could reward myself by indulging guilt-free. It was my mom’s birthday dinner and there was no way she was going to let anyone go hungry on her big day anyway. 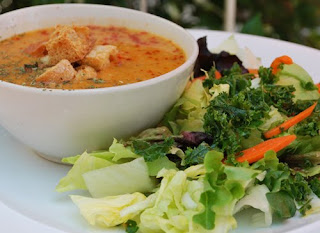 The first Olive Garden restaurant was opened in 1982 in Orlando, Florida by General Mills Corporation, the same innovators who brought Tuna Helper and Franken Berry cereal to the world. The idea of a commercialized chain of pseudo-Italian eateries was not something the uppity food critics had a lot of love for, but it proved to be immensely popular regardless. There are now over 700 Olive Gardens across the nation, and the wait for a table will likely be at least 15 minutes at pretty much any one of them no matter what time of day or night, and they don’t accept reservations.

With that in mind, everyone agreed to meet right at five o’clock in an attempt to beat the dinner rush. Still, when I arrived early to ensure a table, there were already hungry people spilling out the front door into the parking lot. I gave them my name in exchange for one of those fancy plastic drink coasters that vibrates and blinks with red lights when your table is ready.

Twenty minutes crept by and the disc in my hand began doing its disco dance right as my mom and stepdad arrived with a family friend. The host led us through a noisy labyrinth of full tables to a sunny window booth in the far back corner. Our amiable waiter Charlie came by with menus and took our drink order. I’m guessing they must put newly hired wait staff through some kind of wine college. For someone who couldn’t have been much over 21, Charlie knew a lot about the subject. He showed off his expertise to my impressed mother, who sampled several different varieties of Chianti before deciding on a bottle she liked.

I’m not much of an Olive Garden regular, but on past visits I’ve always had my default favorite dish, Seafood Fettuccini, which is actually what my mom ended up selecting for her birthday meal. They do a supreme job of it, with shelled mussels, fat shrimp and scallops mixed with fresh pasta in a deliciously fattening cream sauce. I wanted to indulge a bit, but I couldn’t bring myself to go quite that far into calorie land. Instead, I opted for a dish listed as a new item, the Pork Milanese. 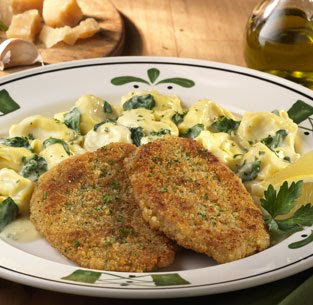 Charlie took our order and returned moments later with our “bottomless” bowl of salad. We dug in but a problem quickly came to light; it contained only two banana peppers for four banana pepper fanatics. Happily, more peppers arrived when Charlie brought a salad refill along with our meals. My Pork Milanese was fantastic; two tender, herb-encrusted, pan cooked pork cutlets served with asiago cheese-stuffed tortellini sautéed in rich garlic butter. Bravissimo! The conversation lulled as everyone became absorbed into their food. Dessert was offered and denied, but when Charlie arrived with the tab, he said “I brought a little dessert for you anyways” and opened the ticket holder to reveal four Andes mints.

In the end, we left Olive Garden fully satisfied with both the fine feast and the hospitable service. Some self-proclaimed aficionados of fine dining may balk at the idea of national chain restaurants, and in many cases they do have a point. However, there’s a good reason why all Olive Garden locations are usually packed to the rafters. They train their crew to provide a positive experience and serve consistently enjoyable cuisine in a fun, lively environment that the whole family can give the thumbs up to.
Posted by Patrick Jacobs at 12:01 AM

The Olive Garden has as much class as the Red Lobster. You either have to be quite desperate or have no concept of real Italian food to go here.
These 5 gallon plastic bucket chain restaurants put good eateries out of business. Think about that next time you're in here.

Being a REAL Italian, born and bred there, I tried Olive Garden once and only people that have NO idea what good Italian food is like it.
I would never go back there , even for free!!!

Oh look, BM196 is here to flame another restaurant. Then again, this is the guy who decided to flame a Chinese place in Idaho as being *gasp* Chinese-American food. Gee, who'd expect such in the United States! Okay, I do prefer a local Italian place (Angelo's) over Olive Garden to be honest. And I don't think Olive Garden is authentic Italian food as served in Italy. But the place isn't horrid either. People need to stop being food snobs and take time to enjoy food as food. Not bash it because it doesn't fit their pre-conceived concept of "authentic"