Buh-bye, Macaroni! At some point within the last month or two, the Hagadone-owed Italian eatery known as Tito Macaroni's underwent a much-needed image overhaul and axed the wacky from its name (except for on all the signs out front). After 15 years as the anchor eatery inside the Coeur d'Alene Resort's Shopping Plaza, Tito's is all grown up now, and has adopted the somewhat blander, more mature moniker "Tito's Italian Grill and Wine Shop".

The name is printed across the front of the new, soft beige menu in minimal, elegant burgundy fonts and shapes, as if to say "the marketing and design departments had eleven meetings trying to come up with this classy shit, so you'd better appreciate your damn lunch, okay - we're fancy now, get it?"

Ironically, the menu itself seems to have taken in some random, decidedly not fancy and not very Italian residents. Do they eat a lot of tuna melts in Italy? Perhaps, but I was scared I was going to run into nude pictures of Snooki and J-Woww if I did a Google search for "Italian hot tuna", so I skipped it. While strolling the streets of old Milano looking for some local old country specialties to satisfy your yen for a real taste of Italy, does one often come across a Grilled Angus Burger with caramelized onions, cheddar cheese, applewood smoked bacon and with fries, soup or salad? I guess I just don't know.

Perhaps new Tito's head chef Jim Barrett (who, it seems, has also been head chef at every Hagadone restaurant in existence)  was trying to broaden their culinary approach in order to cater to customers at the new Splash nightclub, which is opening very soon next door. I'm thinking that the majority of drunk people don't necessarily find a gigantic plate of Artichoke Spinach Mushroom Cannelloni in Garlic Alfredo Sauce for $14 very appealing.

Tipsy folk would be more likely to choose a nice burger and fries or a plate of mozzarella sticks, so I do see the logic in offering them and would guess that Tito's is likely to expand their hours later to try and cash in on all the munchie-struck tourists and meat-market-goers partying the night away next door. At least the "go-go girls" I've seen touted in advertisements for Splash will probably be hungry as hell after hours and hours of hardcore shimmying. 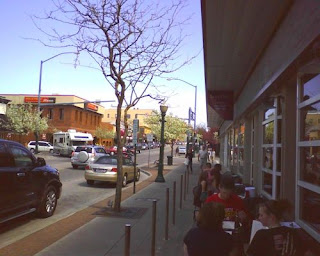 Still, Italian cuisine is the ciabatta and butter of what Tito's is all about, and there is plenty on offer. Plenty of the old Plain Italian Janes appear:spaghetti,fettuccine Alfredo,lasagna, minestrone,Parmesan chicken, etc. The dinner menu does offer a few tempting surprises, such as the Pesto Grilled Prawns and Tortellini, which is cheese-filled spinach tortellinis topped with prawns, Chardonnay cream, herbs and Parmesan cheese ($16).

If you have the kind of sadistic, cruel streak that allows you to stomach the idea of dining on an adorable, innocent baby cow with big, cute eyes, which was most likely tortured horrifically during its brief, sad existence, then you'll surely enjoy the Veal Piccata ($14) with capers, tomatoes and mushrooms in a lemon garlic caper sauce. Yes, please.

Pizza may be a more humane option and Tito's gets fairly creative with what they do. The "Buffalo Blue" includes white sauce, crispy chicken, Frank’s hot sauce, slivered celery and blue cheese and the Rueben (white sauce, stone-ground mustard, corned beef, sauerkraut, mozzarella, and 1000 Island) gets the "Why Didn't I Think of That" award of the month for originality.

Tito's crispsy, brick-oven pizzas have actually always been my main reason for occasionally allowing myself to break my no-Hagadone rule and darken their doorway, but overall I've never been a tremendous fan of the place. Jesi, Carissa, and I decided to join the throngs of folks relaxing downtown one recent smashingly sunny afternoon. We had parked on the roof of the Resort Parking Garage to enjoy the view for a few moments when suddenly hunger pangs hit us on the head like fresh seagull droppings.

Tito's won because it was pretty much the closest and none of us had been there in ages (Carissa never had been at all). Our hostess, Mittu, seemed like one big, gigantic smile as she led us outside to a sidewalk table in the shade of the warm spring sun. Passing through, I noticed that despite the slight name change, Tito's was pretty much the same as it always had been decor-wise - maybe a splash of paint here and there or a bit of dusting and de-cluttering, but nothing too eye-catching and dramatic.

The place was hopping with a late lunch rush, inside and out, which might explain the noticeable delay in our server, Katrina, arriving with our obligatory glasses  of water. Things weren't off to a great start - when she did arrive and filled our plastic red cups, the water was room temperature with only a few scant, ghosty traces of ice cubes that disappeared within moments. Regular readers may remember a pet peeve of mine - either no water upon being seated or unacceptably warm, ick water. I need mine fresh and frosty with a nice, juicy lemon, yo! 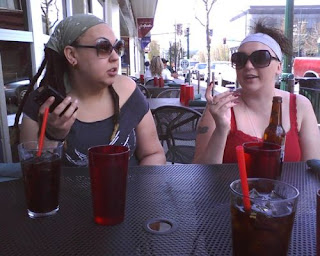 This particular nitpick aside, Katrina's service was perfectly adequate. She returned moments later with our sodas and beers and the warm water was forgotten. For some reason, she also brought one white paper chef's hat and chose Carissa's head to stick it on. She spent the rest of the day wandering with us downtown wearing it proudly with a pair of enormous 80s sunglasses and a grin. Jesi was mortified to be seen in public with such a bespectacled chef-hat weirdo, so of course I told Carissa how great she looked and made her keep it on her head everywhere we went. (photo is pre-chef hat)

It was a gorgeous day and folks were milling past us constantly, so we enjoyed our lunch with some old-fashioned people watching. The first items to arrive were a heaping basket of delicious garlic bread chunks, which we dipped in olive oil and devoured in moments, and Carissa's garden salad, which she declared "totally killer" with ranch-dressing smeared lips.

Our main courses arrived in a sensible amount of time, although the appearance and temperature of my "North Shore" pizza (Capicola, sopressata, pineapple, mozzarella, Romano) ($9) did give me a suspicious feeling that it had just been hanging out for a while, just chilling while someone finished putting together everyone else's lunches.

Still, it actually tasted pretty yummy, with a slightly sweet sauce, a thin crust which was tender and chewy toward the center but cracker-crispy and seared golden-brown on the edges.It was larger than I remember Tito's pizzas as being, and my leftovers almost tasted better re-heated in my oven for breakfast the next day.

I swiped a few forkfuls of Jesi's Spring Pea Salad with Pesto Prawns (peas, celery, water chestnuts, pine nuts with a lemon dill dressing) ($11) after it cased her big face to light up with joy, and indeed it was quite delicious although I can't say I'd personally want to plunk down eleven hard earned dollars for four shrimp atop a scoop of peas in mayo, which it basically was. 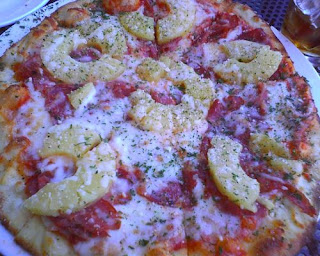 Behind her chef hat and sunglasses, Carissa wasn't enormously enthralled by her Tomato-Basil soup (with sandwich, $6), saying that it was too thick and rather bland, and that Tomato Street serves a much better specimen. She said her grilled cheese panini  was nothing to hire a skywriter about, but was a bit more enjoyable than the soup. However, like my pizza, it seemed to have had a bit too much free time recently while waiting to be served and would have been much more wonderful if it had arrived hot and melty instead of warm and congealed.

After a bit of discussion, we rated our Tito's Italian Grill lunch experience approximately a 6.239 out of 10. We enjoyed the active sidewalk atmosphere, and the service was generally fine, but for the most part our food was average. Not at all disgustoso but hardly magnifico either.

On the way out of the plaza, we had a run-in with an especially chatty Mayor Sandi Bloem, who was just coming out of  one of the clothing boutiques after picking up something most likely devastatingly fabulous to wear. She declared "Oh, I love that place" after we told her rather unenthusiastically that we'd just eaten at Tito's. We didn't argue, and her Sandiness seemed completely unfazed by Carissa's incredibly silly hat and glasses look, although I could tell Jesi was dying inside of embarrassment, . Meanwhile, I was too caught up in the mayor's tiny, perfectly painted purple toenails and chic silver sandal flats to even care.
Posted by Patrick Jacobs at 2:19 PM

Wow...you seem to have a real beef (pun intended) with Tito's, long before you even reviewed it. Tortured baby cows? Really? And give the remodel a chance...it won't even finished until June!

Have you been to Italy? Do you know what real Italian food is? I have doubts if you talk about Salsa Alfredo and other items on restaurant menus that Americans consider very Italian...
If you go to Italy you won't find salsa Alfredo anywhere (or not the American creamy and fattening version), no spaghetti and meatballs the size of a tennis ball, no pizzas with loads of meats, cheeses pineapples and so on...and I could have a very long list of American myths about what Italian food is...
I am a native Italian, born and bred and if I want to eat some authentic Italian food I cook it, because the closest I have found in this neck of the woods is Tony's by the lake. The rest...faggetaboutit!!!