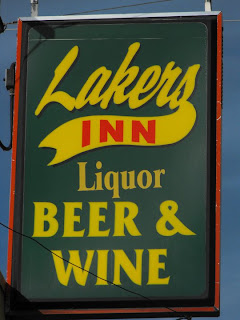 Golly, folks! Somehow a whole damn month slipped into the miasma since my last post. The truth is, I'm bring all student-y and stuff  lately. I'm back at the University of Idaho (Cd'A campus, natch) finishing up my BA in Psychology, and when you're caught up that kind of brain-zapping adventure, time can just slip out from underneath you like a cheap Big Lots bathmat. Plus, being student-y and all, I haven't had a lot of extra fun ticket$ and the typical dining out experience for me lately has been Chinese Gardens takeout delivered swiftly and hot while I'm working the opening bartending shift at my job one block north. I've been kind of a busy beaver.

Despite the chaos, there is one place I've managed to sleaze into a few times recently, a happy rediscovery of sorts. Maybe it's my reentry into the realm of the loose-living collegiate world, but sometimes nothing sounds better than a cold, juicy pitcher of that quintessential American classic: Pabst Blur Ribbon beer. Alas, my main class is on Monday nights and Monday night is our restful sabbath at our bar (we're closed), so for lack of better options (not true), we've been darkening the doorway of one of Coeur d'Alene's oldest and most beloved dives, the Lakers Inn.

This user review I Googled up from the MojoPages website by "Gareth", an obvious regular Lakers regular,  sums up the story rather well:


So many things I have seen at this bar, drinks are cheap, the smell is horrendous, but if you want to see everybody in cda you will find them here eventually....avoid Sunday nights with Baird for he truly only has a job because they keep him around out of pity or something; cant mix a drink for shit. Doug and his hotty girl, Judy, are the best presence @ the bar for the nights of popularity. Jody works the days for them old folks, and does a damn fine job. And then there's Jody's sister Terry, the loose cannon. Quite a girl, just do not ask for more than one perfectly mixed bloody Mary or she will get pissy. Last is the owner, Dwight, ex-drill sergeant or something, only there during the days...this guy is so retired he doesn't remember what it is to "go after it", and that is why Lakers is an almost destination. Good drinking, no fighting, and best of all...you can actually be part of the Lakers family so that you don't have to be part of yours. WE ALL LOVE LAKERS‎


He's right about Judy, for she is a fabulous creature and has been slinging drinks over that crusty old counter since 1978 or something incredible like that. As a bartender, she's effortless and her candid, engaging personality is mixed with just enough raw sass to make the night entertaining, even without the benefit of the only-sometimes music of the jukebox.

I can't really speak on Gareth's blunt (rude?) thoughts about the other bartenders, each time I've visited recently, it's been either Miss Judy behind the bar or it's been the "rookie", Miss Jai, who is also a most excellent hostess. Don't I know it, but it takes a certain type of mental constitution to remain cool, gathered and projecting a positive vibe in a job where one has to tend to a parade of drunk chainsmokers, babblers, loudmouths, pukers, liars, and freaks. I've never witnessed Jai have a code-orange meltdown or anything even close to it, and meanwhile, she's serving up some of the stiffest, cheapest booze bevs in the panhandle with not a drop of sweat.

You probably wouldn't expect the Lakers Inn to be such a trendy name in the world of fashion, but it seems nearly every regular face here is sporting some kind of Lakers logo gear, sweat shits and t-shirts galore, including the specimen you see below. 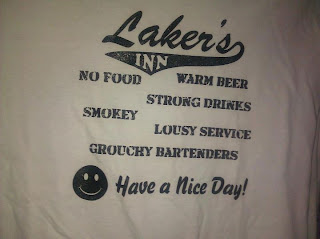 Funny, yes. But let's break this down a bit shall we? No food? Technically, yes, but the Lakers Inn does have one of the more impressive arrays of bar snacks I've ever seen. Packets of peanuts, Beer Nuts and regular or BBQ Corn Nuts. Bags of chips in a vast variety of flavors. Snickers bars and Reece's Peanut Butter Cups. All kinds of stuff. You don't really want to eat a salad or whatever in a place that's so intensely smokey anyway, eh?

Which brings us to our next point. The newly installed Smoke-eeter above the main room doesn't stand a fighting chance against the hardest of hardcore cig puffers that occupy these bar stools from nine o'clock in the morning until two o'clock at night, seven days a week. Warm beer? I've never had it there. In fact the draft PBR is always refreshing and crisp. Strong Drinks? Yes indeed, no-one's going to dispute that. I witnessed one certain twenty-something girl realize this the hard way the other night when I was hanging out. 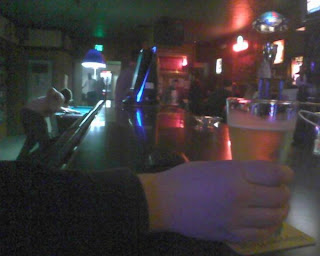 All I saw was a disgruntled boyfriend basically carrying this poor girl out of the ladies room and dashing out of the place with the words no bartender ever wants to hear, "Uh, you kinda got a mess to deal with in there." Judy was suddenly gone for 15 minutes and she returned looking like she'd seen the holocaust, and for a seasoned vomit mopper like her to have been fazed, you now it had to be traumatically ugly. Lousy service and grouchy bartenders? Like I said, not as far as I can tell, but there is a certain snarliness and snarkiness to the vibe of the place that runs deep in the place's DNA.

The Lakers was converted from an old Health and Welfare office (irony?) into the Lakers Inn in around 1968 by Alice and Floyd Roselund, who were actually my paternal Great Aunt and Uncle. Was it somehow a normal thing for parents to bring their toddlers into a smoky beer bar in the 1970's or was it just a quirk my family ran with? Regardless, I recall spending more than a few hours there during my early childhood, playing in the corner while my parents, uh, socialized. The memories are pretty vague, save for the unbleachable image of lurid red-orange floor-to-mid-wall shag carpeting (in a bar? what were they thinking?). Still, I am quite sure that everything but that godawful carpet (it has since been covered over with equally-as-taste-questionable wood panels) has remained at least 90% unchanged.

That's not at all a complaint, either. In a town with increasingly fancy-pants drinking spots (Seasons, Splash et al), it's comforting that the only things resembling mod-cons at the Lakers are the televisions and the ATM. They don't have the equipment to accept credit cards and the CD jukebox is comprised of almost entirely tunes one might have expected to hear on the old Wolfman Jack radio show on KVNI back when the bar originally opened. The liquor selection is extremely limited and you won't find anything remotely resembling a microbrew anywhere on premise.

The random and bizarre collection of bric-a-brac behind the bar is worth the trip alone: a can of "bullshit repellent", a pink velour flocked plastic statue of Jesus Christ, a rubber great white shark, dozens of rather rude but tongue in cheek plastic signs. The bar stools are a bit rickety but have been made very comfortable from decades worth of asses working on them until they're just so. I can't describe the ladies room, but the men's loo is like a weird trip back in time to it's Health and Welfare days decades ago - they still have one of those old roll-up cloth towel rigs to dry your hands on. Uh, no. I'll wipe them on my jeans, thanks. 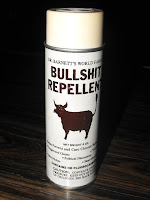 One thing I remember about the Lakers when my relatives owned it was the preeminence of the "Bud Bunch". I'm not sure exactly what the modus operandi of this group was, but from what I can gather, it was simply a group of bar regulars getting together as often as possible and drinking Budweiser beer until they were as sloppily blotto as possible. Yes, this is my family heritage, and how could I not be proud of such a sparkling legacy? In fact, I'm told the Bud bunch still exists in some form, but I have a feeling that these days, the gatherings are small, early in the day, and involve shots of Ensure and Metamucil in between beers.

The day crowd at the Lakers does primarily consist of very, uh, seasoned  barflys and regulars that have been haunting the place for 40 years or more. However, once the senior citizens clear out in the afternoon, the place transforms into Hipster Central. (Some people seem to have no idea what I mean when I use the word 'hipster' so let's turn to Urban Dictionary so I know we are on the same page: "Hipsters are a subculture of men and women typically in their 20's and 30's that value independent thinking, counter-culture, progressive politics, an appreciation of art and indie-rock, creativity, intelligence, and witty banter.")

Okay, maybe that's making the Lakers night crowd sound a little more urbane than they really are, but basically they're young folks who like chunky glasses, beards, and flannel who are looking for an unpretentious place to drink booze, shoot pool, and exchange ideas without having to deal with the rich-bitch trendy twenty somethings that haunt places like Splash or the hip-hop rowdies at Baja or the cover-band cheesers at the Iron Horse. In other words, this vintage hole in the wall is my kinda place.

Unpretentious is really the key word when it comes to describing the Lakers Inn - it is what it is, take it or leave it, up yours if you don't like the smoke or the attitude or the lack of entertainment or whatever else. It's one of the last of its kind in our fair berg, and we should treasure its contribution to the fabric of our local culture and cling to the hope of its longevity.