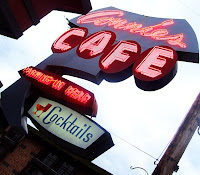 You Don't Miss Your Water When Its Gravy

The rain-drenched Sandpoint streets were as eerily absent of people as the creeks and beaches that surround the town were lacking in water. Q. and I were spending a recent grey Sunday afternoon milling around North Idaho’s hippest city and we were bothered by how the normally lush waterways seemed to have run completely dry, outlining the lake edges with ugly patches of brown dirt and sand. Entire docks and marina systems were sitting on the dry lake bottom. A troupe of beeping numismatists with metal detectors hunted for treasures in places where they would normally find themselves twenty feet under the surface of Lake Pend Oreille. Was this tragic state of Sandpoint’s aquatic beauty a natural, normal occurrence, we wondered, or had something gone terribly wrong?

When Connie’s Café and Lounge locked its doors indefinitely in 2006 people felt a similar sense of unease. It just wasn’t right, such a classic and beloved gathering place once bustling with friendly faces, now just sitting there empty. After all, Connie’s had been attracting diners and drinkers from far and wide with its kitschy corner sign since evolving from a gas station into Conrad Balch’s Café in 1955. That massive sign, resplendent with red neon, campy retro typefaces and Vegas glamour is as much a part of the Sandpoint landscape as the creeks and lakeshores themselves. Having been a guiding light downtown for over fifty years, it was as unsettling to see it dark as it was to see dry land where ducks once swam.

Fortunately, former employees Jenny Jaeger and Donna Brundage felt the same way and after some fresh paint therapy and a menu overhaul, reopened Connie’s in May of last year. The girls knew what worked on the original menu and what didn’t so they were able to save some popular old favorites while making room for some much-needed updates. As far as menu specifics, I can only be vague and work from memory. Annoyingly, I lost the photocopy of the menu that our waitress so graciously provided me with after putting it down to snap photos of the neon sign and driving off without it. 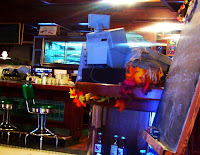 The family-style menu is large and varied, full of delicious sounding things with cute, interesting names which, unfortunately, I can’t quite recall. There are oodles of yummy breakfast options, including the usual staples as well as some standout specialty omelets and skillets. I do remember seeing the Mariner Special, which is Eggs Benedict with smoked salmon, but I was in more of a lunch mood. A plethora of burgers and sandwiches are listed, and I recollect seeing a section of lunch wraps, some humongous salads, and some home made soups, chilis and chowders. A quick browse of the dinner menu revealed lots of classic comfort cuisine of the meat and potatoes variety.

I’d felt a need to visit the “boy’s lounge” since leaving Coeur d’Alene 45 minutes earlier, and on my way through the back hallway to the restroom, I paused for a moment to peer through a grated door and check out the goings-on in the attached bar. I could hear drunken voices and the dull clank of pool balls but could see only vague smoky movements in the dark. Suddenly, the door swooshed open and a beer-breath guy in a white cowboy hat nearly knocked me sideways. “Coming in?” he grimaced, leering at me through one good eye. “Um, no. Wrong door.” I’m not sure if I’ve ever felt compelled to discuss a restaurant’s bathroom before, but I have to mention that Connie’s was so scary, so unclean, and so utterly unappetizing that I nearly told Q. we were out of there. The restaurant does share its facilities with sloppy drunk lounge-goers, but that left a bad first impression that’s easy to fix. Clean it, kids!

To their credit, the restaurant area itself seemed sufficiently neat and grunge-free. Q. and I had expected the atmosphere inside to match the retro-camp style of the neon sign, but except for the electric green vinyl-and-chrome barstools, the interior is much more elegant than that. Massive, ornate wooden built-in fixtures, walls cluttered with historic photos, local artwork, and old advertisements, and dim lighting create a lodge-like sense of comfort and relaxation. 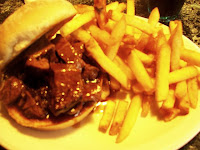 It was so quiet in Connie’s that afternoon, just a couple of other tables occupied and a gaggle of very young staff milling around. In fact, I wondered aloud to Q. at one point “Where are the grown-ups?” Not that these kids didn’t do a good job. Service was absolutely great and the food was the most memorable thing of all. I’d ordered “Brian’s Almost Famous BBQ Pork Sandwich” and it was as if the cook had cut a pork tenderloin into huge, rough chunks, tossed them in gobs of thick, homemade barbecue sauce and served them on a fresh, perfectly toasted white bun. It should indeed be famous, it was tangy and tasty and the fries were so good, I had to repeatedly stab Q. with a fork to keep him from snatching them all off my plate.

Q.’s “Tow Truck” was a breakfast mish-mash of eggs, hash browns, peppers, and gravy served in a miniature metal skillet that he said made him “feel special.” Aw. What was truly special was that gravy, which I had to steal several bites of so that I could rank it on the Get Out gravy scale. It was peppery and scrumptious, scoring at least 8 out of 10 for sure. We finished with a huge slice of made-from-scratch chocolate cream pie that was so rich; Q. could only make it three bites deep, leaving me to perform a mercy killing on the rest. Refreshingly simple in execution and presentation, our meals were free from culinary frou-frou but high in flavor and quality. Like Sandpoint’s water level, hopefully we will return someday soon.
Posted by OrangeTV at 12:01 AM

Question: OTV's mini-review of the restrooms at Connie's Restaurant is worth a separate post. So what do you think? Which restaurants or other public businesses in the region keeps the best and/or worst restrooms? Have you avoided restaurants because the restrooms were nasty?
Posted by DFO | 8 Nov 12:20 AM

The CdA K-Mart has restrooms that need attention.

Safeway on Neider always stinks!
Posted by ya betcha | 8 Nov 9:08 AM

Starbucks' restrooms anywhere always seem to be clean. True of Costco also. Avoid Safeway in Colville... they are doing an extreme makeover now so perhaps that will include bathrooms.
Posted by inlandempiregirl | 8 Nov 11:54 AM

When I was 16 I worked at the Safeway on Neider. I was responsible, often, for cleaning those restrooms and so I can empathize with the current teen workforce who must deal with it.

There was one work day where a manager called me up from other work I was doing, put his hand on my shoulder and apologized to me.

Then he sent me into the men's restroom where someone had, err, gone No. 2 and smeared it all over the place, including the walls.

I had to clean it all up. And I've got the worst gag reflex on the planet. Not a good day.

One of the worst restrooms in the county is out near Black Rock at Shooter's Grill of all places. I have sometimes chosen NOT to go there just because I knew I wasn't in the mood to endure the ladies room.

My boy is too small to go it alone in the Men's Room there. So I go with him to the Ladies Room where he always puts the toilet seat up. There's little left to the imagination about what kind of crap happens in a bar when you put the toilet seat up. YUCK! I've considered calling the health department everytime I'm in that restroom. Between the seat, the sink, the dust, the towels, the floor, etc, it is scary awful.
Posted by MamaJD | 8 Nov 1:39 PM

First of all, I commend OTV for finding his boutique/niche review area. It's always wonderful when we grasp our dream and are surprised.

The IGA in Rathdrum had the most loathsome toilet - plugged and overfull with what appeared (the certain hot summer day I ran in it, seized one day shopping by a horrible lower abdominal cramping episode so thunderingly furious I expected the Richter scales about the Selkirk mts were, in that moment, spiking madly and causing geoengineers in Denver to be madly calling NORAD to scramble the fighter-bomber fleet as the Rocky Mts were being nuked) to be the vile and nauseatingly malodorous crappage of an entire timber crew on a potty break from clearcutting some once pristine North Idaho mountain, and lemme tell you some of those logs were off the charts on grade, and the stall walls were splashed with a hideous brown splatter pattern that could only bring one to imagine a paintball gun battle between sewer-trolls using paintballs loaded with violently nasty liquid effluent from their astonishingly rude sewer abodes and cesspool wading ponds.

O! What a pleasure to be the one to have given Bob the golden opportunity to paint such unforgettably graphic mind images of some poor sap's episode of Megacolon in a grocery store crapper. He always was a true master of verbal diarrhea. (insert winking smiley face here)
Posted by OrangeTV | 8 Nov 2:36 PM

I had lunch there in September while visiting their fair city. The service was good and the sandwich was great albeit, a little pricey! Didn't use the restrooms though.
Posted by Duffer | 8 Nov 5:29 PM

My mom and dad still live in Sandpoint. It has once again earned the name as the local hangout. They love the food but they also eat hamburger helper once a week and use maynoise as salad dressing.

Mom says the little girls room is normally clean and fresh so...

I haven't been back since it reopened. Now I am a little unsure and afraid.
Posted by Sparky | 8 Nov 8:35 PM

Sevice is poor with lousy attitude.

The bar has developed reputation as a "partybar" where they are rummored to sell more than Spirits.

Will never go back