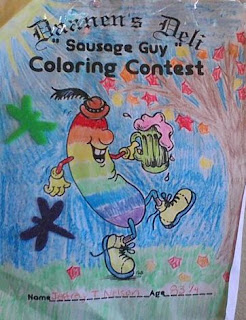 It seemed I’d stepped through a magical portal through space and time to an enchanted place where men and women sporting the latest in Bavarian fashions perform volksmusik on accordions and tubas, sling scoopfuls blaukraut onto paper plates, and pour tall, healthy steins of cold Hefeweisen beer. No, I wasn’t experiencing hallucinations brought on by said Hefeweisen, and I hadn’t accidentally stumbled into Leavenworth, Washington, although both have been known to happen. Actually, I was relaxing and enjoying the fall sunshine at one of the area’s largest and most popular Oktoberfest celebrations at Daanen’s Deli in Hayden.

I was a little surprised to see a traffic director waving me into a parking spot as I arrived to meet a friend for lunch and to check out Daanen’s version of the traditional German festival, which originated in Munich exactly 200 years ago as Crown Prince Ludwig’s wedding party. They really go big for their Oktoberfest gala and people come in droves, filling up tables inside the dining tent and sprawling out across the many comfortable patches of grass.

I found my friend and we got in line at the food tent, which was set up assembly-line style, with a gaggle of lovely ladies in ruffled, breast-accenting dresses called dirndls assisting in putting together heaping plates of goodies. One selects their choice of a white or wheat brotchen (basically a German hot dog bun), a plump German sausage such as Bratwurst or Weisswurst, and toppings such as regular sauerkraut or the red cabbage version (blaukraut). This is topped off with your choice of interesting mustards such as Dijon, whole grain, and Dusseldorf. 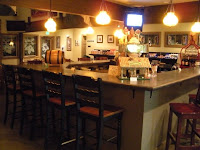 My brat with sauerkraut and Dijon was monstrous in size and incredibly tasty, but the real highlight of my meal was Daanen’s fantastic German Potato Salad. It’s a simple but extremely addictive creation, consisting of tender boiled potato chunks, bacon bits and vinegar dressing and served warm. It’s the kind of thing virtually everyone loves, in fact I have a friend who loves it enough to order four pounds of the stuff to take home on a regular basis.

Fortunately, they don’t spoil only their Oktoberfest revelers with their marvelous potato salad, they make it available year round inside, along with an impressive and unusual selection of food and beverage goodies. I decided to return a few days after the big festival to have lunch and get a better idea of what Daanen’s deli has to offer on an everyday basis.

Mark and Irene Daanen opened the first version of their deli in 1992 in a tiny shop a few blocks away from their current, more spacious location, which was built in 2006. From the beginning, it was an essential stop for those looking for a large selection of beers and wines from around the globe, as well as a great place to find a killer sandwich. The larger space has only improved the situation and with its charming old-world décor, comfortable bar area, live music on weekends, and sports events on their 160” TV screen, Daanen’s has become one of the hottest gathering spots in Hayden. 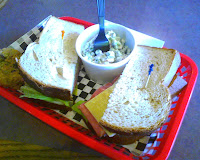 It would likely take years to try every variety of beer in Daanen’s cooler. I’m not exaggerating when I say that if it exists in the world, Daanen’s likely has bottles of it chilling and ready. Cases and shelves are filled with local micros, European beer, Mexican beer, Asian beer, Canadian beer, heck, they probably even have Zimbabwean beer hiding somewhere in their racks. Their selection of wines, cheeses, deli meats, European candies is equally intriguing, so it’s best to come with an open mind and a pocketful of cash.


I ordered my sandwich by highlighting my choice of bread, meat, cheese, garnishes and condiments on an order form and ended up with a huge pastrami and Swiss on thick slices of wheat bread. Longtime employee Michael Malley brought my lunch to my table in fast fashion with a smile. The bread was so wonderfully soft and delicious, I had to ask Malley about its source and was told that it’s made fresh daily with Daanen’s own “secret recipe” by an exclusive local bakery. Their deli case is stocked with a variety of homemade sides, including the aforementioned German potato salad, as well as the perfectly creamy pea salad I picked to accompany my sandwich.

Oktoberfest was a blast, and m become a new tradition for me, but I will be returning to Daanen’s year round to enjoy their unique and welcoming atmosphere, friendly service, unusual selection of beverages, and high quality food offerings. Just don’t expect to see me dressed in lederhosen and red suspenders.
Posted by Patrick Jacobs at 1:41 PM

I was born in Germany and raised by a german mother and Oma, honestly this place is overated.
Not many choices on the menu, no true German atmosphere.
Owner needs to be warmer and friendlier.

I love Daanen's. Maybe cause I've known then since 1992 and they are like family to me. I was so happy for them when I read this blog about them. Im sure they where thrilled also. So thanks for the awesome review of my great friends. They are lovely people and I miss them.