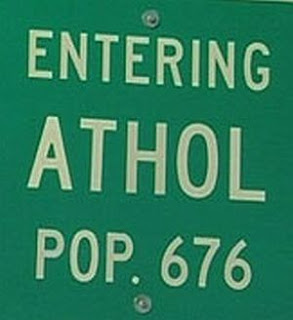 To some folks, Athol, Idaho is known for its funny name and as a stoplight one must endure whilst travelling between Coeur d'Alene and Sandpoint. Personally, it has a place in my heart for hosting the wonderful Country Boy Cafe, home of the most incredible Chicken Fried Steak and Biscuits and Gravy in the Idaho Panhandle. In honor of Athol's recent celebration of 100 years of official existence I've put together some semi-fascinating history and trivia bits about the 8th largest town in Kootenai County.

Athol has always had a bit of an identity crisis, at least name-wise. The town started as Colton, which was changed to Athol after a settler from the Massachusetts town with the same name decided it was somehow better. In 1966, after the Girl and Boy scouts both held events nearby at the old Naval base, the name Roundup City was suggested and rejected. Later that year, when Farragut State Park opened its gates a few miles away, a town debate arose among its 300 residents whether they should change the town’s name to Farragut to sort of “cash in” on all the tourists that would be blazing through. Some residents thought it would be a good way to avoid confusion, others were vehemently opposed.

In a Spokane Chronicle news article at the time, local grocery owner Mrs. A. A. Olston complained “It’s always been Athol and I want my children when they grow up to say they were born here.” Her mother, Mrs. W. R. Johnston explained how the town of LaCrosse had changed to Gibbs at one point and was later incorporated into Coeur d’Alene, making it difficult for a person from LaCrosse to “prove they were ever even born.” To this day, there are those who think Athol should change its name as to stop being the, ahem, butt of so many bad-taste jokes. 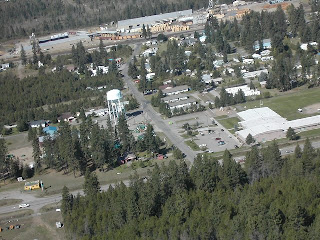 The first fluttering of modern life where Athol now sits was a Northern Pacific Railroad Station built in 1882. By 1909, when it became an official town, Athol was one of the hot spots of North Idaho with all the jack pine trees boosting the lumber and agriculture industry to a peak. The town had many hotels, a drugstore, a blacksmith, a jewelry store, a throbbing discotheque, a mercantile company, a botox therapist and multiple restaurants.

The Great Depression effectively ruined the fun and the good times in Athol went pear-shaped. The population declined rapidly and things didn’t pick up until Farragut opened nearby. Since Silverwood Theme Park has been booming just down the road, things have been looking even more upbeat for development in Athol and it should finally have somewhere to buy underwear in about another hundred years or so. Things move kind of slow that way in Athol, but fortunately that’s how most Atholites like it.

I read somewhere in my research that the name Athol means “pleasant place” which surprised me slightly as I’d always thought it meant “a place to stop for gas and some Ho-Ho’s.” According to the 2000 US Census, Construction is the number one industry in Athol at 26%, and the 11th largest industry is making doo-hickeys out of the branches that fall from the trees after a big storm. The most common occupation for males is “vehicle and mobile equipment mechanics, installers, and repairers” (8%), and for females it’s “food and beverage serving workers except waitresses” (9%). Okay, where are they serving food and beverages then? At home when their husbands come home from a hard day at the garage? 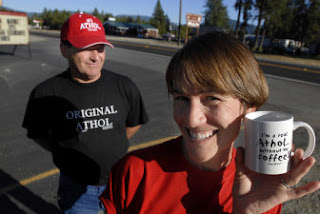 Athol didn’t even have a library until 1971, when volunteers under the direction of Mrs. James McMurray opened one up in the corner of the Athol Elementary gymnasium with just under 4,000 donated books. 3,500 of these were Harlequin Romance novels and the rest were auto repair manuals. In 1996, Athol resident Lynne MacKinzie employed her clever wit to create a line of Athol Gear products that pretty much said what everyone had been thinking all along. Things like "Prevent Colon Cancer, Get Your Athol Checked" or "I'm a real Athol without my coffee." Even mayor Lanny Spurlock dug the idea saying "Hey, why not have a little fun in life?"

Primarily unchanged for decades, Athol remains a peaceful place where you can still hear the freight trains rattle across the vast open prairie and the cattle groan at the moon and stars in the clear night sky. Lastly, a visit to one of the town’s handful of busy diners is a trip back to a slower, more charming time when the food really stuck to your ribs, everybody knew everything about everybody, and friendly faces made even strangers feel welcomed.
Posted by Patrick Jacobs at 12:00 PM

Afew sources claim the word "Athol" is of Scottish origin meaning "New Ireland," or "coming from Ireland." Nice article; thanks!

Funny article, and so true!

Do you know if there would be any old records available for any hearings that were done while they were working on rerouting the railroad after the train wreck at Granite Lake on March 2, 1962? There are a number of people that own land up in the Homestead Road area who lost legal access to their parcels when they rerouted the railroad. They (Northern Pacific at the time, now Burlington Northern)built a new road but neglected to record it with the county. So any records of hearings or any knowledge where some records might exist would be appreciated!

You can click on my link and leave a comment on my blog if you have any info.
Thanks!

I have been trying to find the origin of the beautiful town of Athol! Thank you for your help! My guess was it was named after a man, Harry Athol, long ago. Thank you for the clarification.

Someone forgot to mention another great resturant in Athol. The "Saddle-up Grill" and has been dishing our some great food - like Smoked Prime Rib.
An Athol resident.

My clan has long roots in that whole area in the logging business back in the day. My job has taken me out east for many years now, but before my Dearly Departed Ma passed, she made sure I got my "I'm a real ATHOLIdaho without my cold beer"! hat AND coozi. I still hold them close to my heart. She loved that country and the Athol products; and the folks always enjoyed a good Athol joke! We generally always made it to Athol on my trips home for some excellant meals and a nice drive. Hope to make the area my home again before long.

Some of us think of Athol as our Mayberry :)

You know what would do really well at that corner Conoco would be a Redbox.

I'm excited to visit Athol, Idaho.. There is a line in the movie "Maid of Honor" (with Patrick Dempsey), "he comes from a long line of Athol's". I think it is great that this town is having fun with its name!

My husband and I plan to retire soon, making Athol our place of retirement. We came to Idaho for the first time in the summer of 2016 and came upon Athol, we can't seem to stop talking about this small community. Retirement can't come soon enough.
The Gadberry's

Please note .. If you move here, live like we live and don't try to change things .. There are so many people that move here from CA etc, and when they get here all they do is complain about the turkeys and wild animals. This town is what it's all about .. I moved here for the solitude and beauty .. Some of the people that have moved here and have attended out HOA meetings, complain about everything. Then why move here? Go back to where you came from. I don't like to sound so harsh, but this is what has been happening .. folks come up in the Spring and Summer and its wonderful .. but they have never been here for one of our winters .. this is the snow belt .. Surprise .. Come enjoy Athol, don't try and change it!