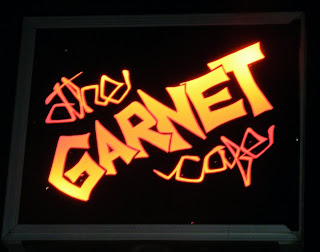 “He that but looketh on a plate of ham and eggs to lust after it hath already committed breakfast with it in his heart” ~ C.S. Lewis.


Is it possible to be down-to-earth and put on airs at the same time? After an enjoyably relaxing and satisfying Sunday breakfast at Coeur d’Alene’s new Garnet Café, I’m convinced it most definitely is. With a few fairly oblique menu options, the haughty air of several of our fellow diners, and an overall aura of class, my breakfast partner and I felt remotely out of place for a few moments, like maybe sitting at Denny’s having Moons Over My Hammy was where we truly belonged.

However, first impressions really aren’t always correct and by the time we tottered happily out the door, we both had satisfied bellies and a serious case of the warm fuzzies caused by both the memorably unique breakfast platters and the welcoming staff.

The Garnet Café sits in a converted house directly behind midtown Coeur d’Alene’s sushi hotspot the Syringa Café, and was hatched earlier this month by that restaurant’s owners Viljo and Autumn Basso. I’ve always enjoyed Syringa for seeming like a little spot of Seattle in the middle of North Idaho, and the Garnet Café has the same hip, urban vibe. There’s a dim-lit bar lined with tall wooden stools, the bandying about of phrases like “duck confit” and “house cured salmon gravlocks”, and a selection of unconventional framed photos and art (our favorite was a wild painting of a gun-welding octopus). 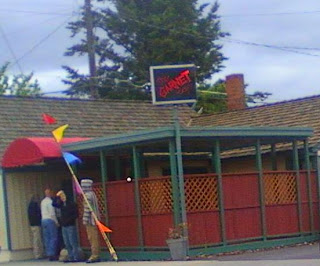 It’s not always a bad thing for a restaurant to act a little ostentatious and artsy and the Garnet certainly isn’t your ordinary hometown mom-and-pop breakfast joint. Open only until 1 p.m., the menu features exclusively breakfast fare, and the large selection of geographically-named omelets are generally on the unusual side. The “Kootenai” includes steak, bleu cheese, and caramelized onions; the “Lincoln City” combines Dungeness crab and cream cheese and the “Coeur d’Alene” does the same with smoked trout. With the “Bonner” omelet, they’ve managed to incorporate every vegetable known to man, including eggplant and squash and tossed in some goat cheese for good measure.

Other notable choices include stuffed French toast, Sockeye Salmon glazed with orange marmalade, the aforementioned duck confit, and white beans cooked with red peppers and topped with sour cream for the vegetarian types. They do offer some more of the more status quo fare as well, including steak & eggs, corned beef hash and even spam. One of the most delightful aspects of their menu is that pretty much every meal lands quite affordably under the $8 mark.

I decided to try out the “Green Eggs and Ham”, which is eggs with pesto and parmesan, and it came served with “Northwest” potatoes and rosemary toast. The ham was rough cut and grill-seared and there was plenty of it. The eggs were done to perfection and thankfully their greenness wasn’t overdone, providing subtle color but maximum flavor. The potatoes were quartered Yukon golds mixed together with sweet onions, peppers, mushrooms, and roasted garlic. Incredible, and I didn’t need to smother them in ketchup like I would with Denny’s slimy hashbrowns.

We were offered fresh preserves and lemon curd with our toast, a nice touch that had us nearly fighting for the last few spoonfuls of each. I was also able to steal a few bites of my friend’s lunch, a “Northwest” omelet with salmon gravlocks, asparagus, onions, tomatoes, and goat cheese. I’m someone who’ll probably never click “like” on salmon’s Facebook fan page, but even I was impressed by the rich creamy flavor of the omelet. 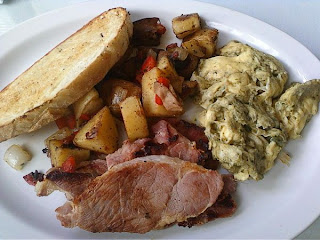 My only gripe is a gripe I’ve griped many times. In my world, it’s always been expected to receive glasses of ice water upon being seated. Our service was otherwise spotless, and we were quite able to forgive our waiter for the oversight since it was utterly chaotic in the café at the time, but we did have to give the side-eye when we realized that nearly every other table in the room had tall, cold glasses full of water and we didn't. We made the request to our server, then to another server just passing by, but still no luck.

About halfway through our meals we became so parched that we actually became jealous of our neighbors and began formulating evil plans for a water heist. Finally, we just got up and harangued a kind busboy into getting us some.

The water incident aside, we left feeling like we’d discovered a wonderful new eatery that we couldn’t wait to start hyping up to anyone who would listen. The Garnet Café is a true gem floating in a sea of ordinary breakfasts.
Posted by Patrick Jacobs at 12:00 PM

Finally had a chance to visit The Garnet Cafe a few weeks back with my wife and we came out full and happy! I'm always a big fan of duck and really enjoyed their duck confit.

I'll be back, especially since it's just a few blocks away from our 4th street store. Midtown is a great place to be!

Pork Steak + traditional potatoes = tons of pleasure! seriously the garnet cafe is one of my favorites spots in this country