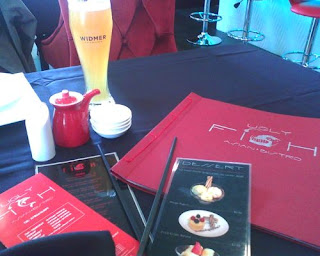 Once upon a time, deep in the darkest dark zone of Osaka Bay, there was a bright young Caulophryne Polynema named Coco LaStrange. All the guys thought Coco had a real great personality and could really be a groovy pal to spend an afternoon fusing bloodstreams together with or watching old re-runs of  "Gimme a Break" (Male Hairy Anglers are well-known for their love of Nell Carter), but none of them wanted to bring her back home to mama's sea-cave and would never consider putting a shiny ring on her tentacle. Sadly, Coco LaStrange was an ugly-ass fish.

So, in an effort to lift her deflated spirits, Coco enrolled herself at the Thousand Fathoms Institute of Totally Fricken' Awesome Asian Cuisine. To make a dumb story short, she graduated with highest honors and went on to open Coco's Ugly Fish restaurant, which garnered ecstatic reviews from the press and three stars in the Michelin Guide.

Celebrity sea creatures and their Remora-like paparazzi would travel all the way from the thermocline in droves in order to ingest one of Coco LaStrange's amazing culinary creations. Now absurdly wealthy, it didn't take long for a handsome young gold-digging Umbrella Mouth Gulper Eel to come along and scoop her off her fin. Our dear Ugly Coco married her enormous-jawed lover and lived happily ever after.

Our deep-sea heroine may or may not have served as an inspiration for the proprietors of Coeur d'Alene's new Ugly Fish Asian Bistro when they were coming up with a name (update: she didn't, I made it up), but if I were to adapt that story into an off-Broadway music, this slightly surreal, mega-funky eatery in Riverstone would be perfect to serve as the backdrop.

Right upon entry, the decor of the place is striking. A softly trickling grey marble waterfall and a wrought iron wall of bubbly circles in the entryway lead in to a room that reminded me immediately of a night-club scene in an old mid-60's Japanese spy film. The retro-futuristic overhead lamps and trippy wave-textured white walls are pure Op Art kitsch and the red velour luxury of the booths and chairs, black linen tablecloths and edge lights that gradually, almost subconsciously, change colors, make Ugly Fish a local dining environment that's literally like no other. It's one I happen to find particularly comfortable, and even the schmaltzy elevator jazz pumping out from the sound system seemed soul-pleasingly loungey.

The Ugly Fish menu is like a coffee-table art book, pages and pages of kaleidoscopic food pornography, wild fonts and playful layouts, all bound together with a thick textured maroon rubber cover. Those things are big and heavy, like a deluxe-edition Japanese import KISS triple live LP on 180 gram vinyl. There are so many items on the menu, it's a bit mentally exhausting with the weight of possibility. In fact, everything on the menu has an item number attached to it, and in full there are around 150 choices to make. 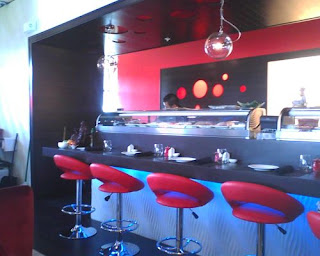 Let's break down a few highlights:

Appetizers -
Crispy Calamari with Jalapeno  Dipping Sauce ($8) (someone at a table near us ordered this and it was a mouth-watering tower of fried squid rings). Crab Haumaki and Shitaake Mushroom Egg Roll with Spicy Ponzu Sauce ($9). Chilled Drunken Chicken Top with Shave Shao Xing Wine Ice (that one reminds me of an particularization wild date had once back in my '20s).

Traditional Chinese-American favorites such as a three-star spicy General Tso's Chicken ($13),  Cashew Nut Chicken ($12), and Moo Goo Gai Pan ($14) are available in force as well, as are salads, fired rice, hot pots, and desserts. Ugly Fish touches lightly on Thai and Korean cuisines as well, but the sushi is what pretty much takes up the bulk of the menu, and a sushi itch was the main reason a friend and I decided to pull into the quiet corner of Riverstone and meander in last weekend.

Our waitress was enormously considerate and helpful throughout our experience, answering our questions about which items were freshest and finest that day with the encouraging reply "Let's put it this way. Everything you see up there in the chef's cooler was swimming around a few hours ago". Our busboy never let our water glasses get less than 5/8ths full, and when we asked for a couple pints of beer, he told us he couldn't get them for us (not old enough), but he passed our order to our waitress who brought them out immediately. There's a lot of staff running around, and they seem to communicate well. 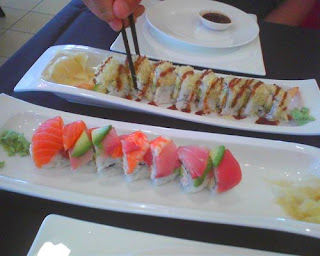 After gazing starry-eyed at the menu for a while, we concluded that the best option was to order a couple of big "special rolls", a quartet of nigiri-style sushi pieces and split everything up. After we placed our order, we had to have a moment of silence for the late Takara, which was our favorite local sushi place for many years for a lot of reasons. One of them being that they'd always automatically bring out bowls of Miso soup and Sunomono (cucumber vinegar salad) with every order. We missed their presence at Ugly Fish.

Our rolls arrived first, a Rainbow Roll ($11) (assortment of  red snapper, tuna, salmon, and yellowtail wrapped around a basic California Roll) and a Crunchy Roll ($9) (also a California Roll, with the added insertion of tempura shrimp and fried with an exterior layer of tempura.) We didn't keep either around long enough to get to know them intimately, merely made acquaintances - they were simply too tremendously fresh and palate-pleasing to let linger.

We finished our experience with one piece each of wasabi and soy soaked nigiri pieces (Yellow Tail, Salmon, White Tuna, and Blue Fin), and each seemed more rich and butter-melty in texture than the last.

You've probably gathered by now that Ugly Fish isn't likely to end up in the "Cheap Eats" edition of the Inlander anytime soon. One expects to pay a bit for quality sushi, and frankly, both my friend and I were feeling as suddenly poor as Paul McCartney after his divorce from Heather Mills.

Still, while we weren't able to really delve into the impossible plethora of food dimensions on offer at Ugly Fish (I may do a part two review covering their non-sushi side), we were able to get our sushi fix well taken care of without putting down a completely outrageous amount of cash (the bill came to just around $50) and left feeling full, content, and impressed.
Posted by Patrick Jacobs at 8:00 AM