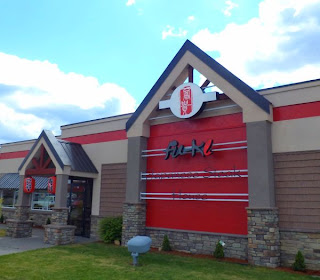 Ha! Just noticed that Get Out North Idaho received this comment on the last (not so) recent post: "Anonymous said... Is this blog dead? Did the writer kick the bucket or what??" Well, anonymous, the answer is, for better or for worse, no. As I mentioned on the forever-ago review of Lakers Inn, I have been sold into a life of educational slavery, having made the decision last years to return to the University of Idaho for another round of good times. Now suddenly, summer is upon us, and like April fog lifting away into May blue skies, spring semester is officially over and I'm again able to spend more time on blathering out some new reviews and what not.

So, no. I haven't shuffled off this mortal coil quite yet, but earlier today I had an experience that had me nearly convinced that I had croaked and had, surprisingly, made it to the good place everyone is trying to go after they follow the white light through that soft-focus tunnel that leads toward the afterlife. A place where all of the heavy earthly weight lifts and decay and despair are nothing more than distant memories. A place where time and space mean nothing and existence is experienced on highly transcendent levels. Naturally, that spectral, ecstatic place I'm referring to is Post Falls.

Wait, that last bit doesn't sound quite right, does it. Specifically, my brief tryst with paradise occurred at the brand new Fu-Ki Japanese Streak House & Sushi Bar on Seltice Way in the bustling River City. Local foodies have been excited about this one for a stretch now, and details have been rather mysterious and slow coming, especially since Fu-Ki seems to have spilled no ink or pixels on advertising or web presence at all thus far (my darlings, do you need me to help you set up a we page or at least a Facebook account? E-mail me!) As my dear friend Kami Jo would say, I'm not. gonna. lie. It was damn well worth the wait. Today's lunch time visit to Fu-Ki has me so thrilled about the place that I'm not even going make light of the dirty word potential of mispronouncing their name. 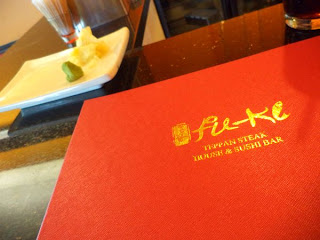 I'd read that the restaurant was finally flinging open their doors this week, but never got the confirmation memo so I wasn't sure if I was going to be able to check the place out when I decided to make the jaunt over to Post Falls. When I pulled into the lot there weren't a lot of cars, but there were a couple of people hovering out front so I yelled at them, "are they open?" "Eleven thirty!" they yelled back. I used the ten minute wait to categorize the different grumbles and squeaks my tummy makes when it's starving and angry.

Walking in , I wasn't sure what to expect since I knew the building was converted from a former Arby's/Taco Time, but rest assured, any and all evidence of fast food frivolities has been gutted out and replaced with an entirely new layout and decor. I'm thinking at this point, with Fu-Ki still in soft-opening mode, not all the decor and furnishings are complete and finalized. The place seemed a little bare, but the warm reds and browns and Japanese tapestries  were exactly what one would expect to see in such a place. Yes, it's a little generic at this point, but that's likely to change with time.

I chose a seat right up at the bar, and was greeted immediately by the sushi chef, whose name I would later learn was Jackie. Jackie's English leaned toward the broken side, but he seemed like someone who had been making sushi since Mothra was just a pupa. There was an enthusiastic and charming glint in his eye as he walked me through the menu, excitedly pointing out highlights and specialties.

I wanted to catch a sample of this and that, so I told him I was looking at getting a bento box. I love bento boxes anyway because I have a bizarre fetish for eating out of a self-contained unit with neat little compartments. I'm not one of those weirdos who freaks out if their foods touch, but if you are, a bento just the thing for you. Their bentos come with soup and a garden salad and three selections from a list of entrees, sushi rolls, appetizers and sides ($13.95). I chose the Sesame Chicken, the Sushi Assortment, and the Spicy Tuna Roll. 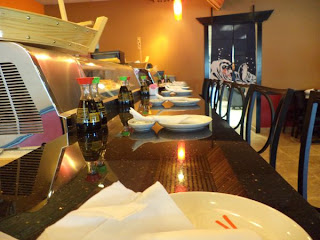 I placed my order and asked to hang onto the menu so I could give it a deep investigation while a waited for my bento box to appear. Unique appetizers in the fully illustrated tome include Calamari Tempura ($6),  Mango Ceviche ($11), and something called Dynamite (an assortment of seafood baked in a creamy sauce) ($9). I crave edamame like crack (no mom, I don't really crave crack), so I made a mental note to order up a plate of the salty steamed soybeans.

Sushi boats are like little wooden ships filled with multicolored edible happiness, and Fu-Ki has four to choose from, with the top-tier choice being their namesake boat at $88.95. That may sound steep to some, but there are enough nigiri, sashimi and specialty rolls included to feed several dozen Shibuya district fashion models (or an American party of four or five folks). For a party of two, or a party of one who doesn't mind the occasional feeling of a severely distended colon, they offer the "Love Boat", which is still enough sushi to make even Captain Stubing throw in the anchor ($50.95)

The number of specialty rolls Fu-Ki offers is multitudinous, and on the menu, they all are actually like little gorgeous Japanese supermodels, shimmering, airbrushed posing in the perfect lighting and with slightly tropical feeling garnishes. Some familiar faces appear in this layout: Las Vegas Roll ($10). Spicy Rainbow Roll ($12). A massive, fire breathing Dragon Roll ($14). However, it's some of Fu-Ki's unique one-offs that win the modelling contract: the Snowcom is lightly baked with crabmeat, baked salmon, and avocado inside and albacore, lobster, and a special sauce on top ($14). The insane Popcorn Lobster pairs deep fried lobster with jalapenos atop a California roll and is drizzled with a spicy sauce ($13). And since I'm a little fruity sometimes, I like the idea of the Paradise Roll, which is mango and avocado layered daintily atop a spicy tuna roll with special sauce ($10.50).

I was eating edamame, sipping on the basic-but-tasty, beef-brothy soup, and watching the live telecast of President Obama getting off the plane in Seattle on his way to a Dave Matthews concert (such a historic moment to witness), when my lunch arrived. The wait was only about ten minutes, not bad at all considering that the place was really starting to fill up fast with people and that it was only their third day open. Visually, my bento situation didn't really have as much flare as some of the other sushi places I've been to over the years (I still miss you, Takara), but once I broke out the chopsticks and started digging in, by eyes quit caring about anything and handed the whole show over to my hungry mouth.

These poor fishies must have still been doing the flip-flop inside an ice chest when they showed up at Fu-Ki or something. All four pieces of my nigiri assortment were mouth-meltingly tender, with a smooth buttery texture and richly fresh flavor that would be enough to convert even the folks who live in fear of the idea of consuming raw fish. Dip those babies in a soy sauce and wasabi bath and let heaven commence. Similarly, the spicy tuna roll was stellar, even the nori holding the bright pink fish and vegetables inside was tender and tasty (there's nothing worse than sushi rolls with stale, chewy nori - ugh).

The green salad was fresh as the morning sun and the orange dressing that topped it off was tangy and bright. Although everything in my bento was truly fab, I really fell head over heels for Yu-Ki's sesame chicken. It's simple really, just smaller sized bites of chicken breast covered in a glaze and sprinkled with sesame seeds. But there was something about the glaze that lifted it above and beyond addiction and substance abuse territory. It was delicate in its sweetness but there was an after bang of spiciness that took awhile for my tastebuds to catch onto, but once they did, this was their conversation: Sesame Chicken - "party on Wayne!". My tastebuds - "party on, Garth!" They became best bros and they cannot wait to get together and kick it again sometime soon. 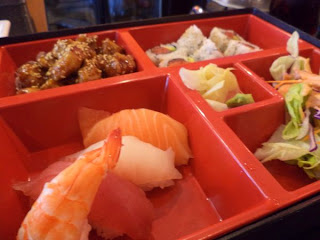 I focused my attention solely on the sushi bar scene of Fu-Ki for my lunch visit today, but obviously a huge part of the eatery's appeal is the Teppanyaki aspect. Teppanyaki is  is a style of Japanese cuisine that uses an iron griddle to cook the meat, and was popularized back in the beehive hairdo era by Benihana. Fu-Ki has six seating areas with stainless steel grill hoods in the center that include plenty of space for chefs to act like showmen with the percussive twirling of spatulas and the dramatic sizzling flame-up tricks. If you've been to Spokane's Shogun restaurant, you know the deal.

There was one table full of lunching ladies being dazzled by one of Fu-Ki's Teppanyaki masters, but I didn't catch much of the show, so I do plan on returning for a second round some evening to experience it first hand (Teppanyaki just seems like a night time thing to me). I did mosey briefly through the separate grill menu and items range from teriyaki beef ($9.50) and chicken ($8.00), to swankier prospects like filet mignon ($15) and everything comes with soup, hibachi vegetables, and fried rice). The spatula show is free.

I was treated so warmly by Mr. Jackie and the rest of the ever-smiling staff that it was hard for me to uproot my bloated and sushi-ed up self from my bar stool and move out into the afternoon. The Fu-Ki employees were abundant and diverse, but what they all had in common was an attitude that they were there to have fun, but the fun wasn't phony or forced onto patrons like some of the gaudier restaurant chains. The staff weren't like training-brainwashed zombies serving insincere joy, but were allowed to be down to earth and let their own genuineness come through. It lends the place an aura of comfort which combines with the top-notch cuisine, ought to put Fu-Ki neck and neck with the White House Grill as the number one reason for foodies to pull of I-90 in Post Falls.
Posted by Patrick Jacobs at 3:01 PM

Just so you know, the phone number you listed is for Benewah Community Hospital...

Your article is amazing! Keep up the good job. Congrats!

Community Hospital indeed. But other than that, I like it. Japanese food is one of the foods that I love the most.