My motto is "Gimme a Crisp Burrito or Gimme Death." OK, maybe not death exactly, but at least a pimp-slap.

I've been enslaved to them since Taco Time first opened it's doors on 7th and Sherman in an oddly shaped building that would eventually turn into Senor Froggy and ultimately, demolition.
It was a wonderful new world of sour-cream enhanced soft tacos, mexi-tots, and cinnamon crustos. The slim, tubular Crisp Pinto and Crisp Meat Burritos were a revelation of deep-fried holiness, and they were additively delicious as well. In fact I still crave them rabidly to this day.

I have nothing but eternal love for Taco Time and all their fine products. When the new 4th Street location opened in the old Taco Johns building last month, I was there ordering up on their very first day. I even worked at a Taco Time in the Spokane Valley for a few months and as much as I can't stand kitchen work, I actually enjoyed that job. I was so enthusuastic about seeing how things were put together and how things ran behind the counter. 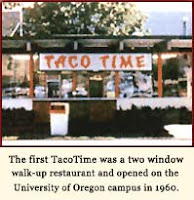 I once had a friend who worked at a Taco Time in Eugene, Oregon. I came to visit her there and she revealed that her location was actually the very first Taco Time that ever opened and the national headquarters were located right there. I jumped with glee like it was Graceland, so excited to soak in the grand history of my Crisp Burrito heroes. OK, maybe it's a little weird, but you gotta have faith in something, right?

Anyway, Taco Time truly has the quintesstial version of the Crisp Burrito. They're never frozen; they really do make fresh batches several times a day, rolled and ready for the fryer. The pinto filling is made from a dehydrated spicy bean mix, but is still very tasty. The ground beef is also cooked fresh in a humungous frying pan, the same spiced meat they use in the tacos, but it's hand-mixed with shredded cheddar cheese before being rolled. A more recent (well, early 90's) menu addition is the Chicken Crisp Burrito, which has a cream-cheese and chive thing going on. Also very good.

Whatever variety I decide on, I always have to get the tangy pink sauce (you have to ask for "thousand island", although it really isn't quite that) on the side for mad dipping action.
I think every diet I've ever been on has been sabotaged by one of these babies.

When the downtown Taco Time went north to the new Silver Lake Mall, it was immediately replaced by Senor Froggy. I'm not a mall person, so my Taco Time visits became pretty infrequent for many years. The Frog was owned by a set lovely triplets, three smiling, identical sisters who sang Country music on the side. They kept the Taco Time menu pretty much intact, so my Crisp Burrito fix was still a happening thing, although their version was a little on the pale and floppy side, nowhere near the stiff, brown-skinned meat wand of the original. Stiff meat wand? Substituting food for sex? Maybe I need therapy 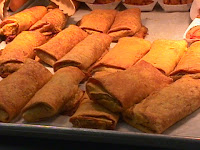 Taco Hell doesn't have anything at all close. Certain C-Stores and Grocery Deli's offer a squattier crisp burrito, usually in bean & cheese, beef & bean, and "BBQ" varieties. These will sometines do in a pinch but tend to laze under the heat lamp for too many hours, causing severe gastrointestinal thunderstorms upon consumption. Get them fresh or beware.

Last night I saw an obnoxious Carl's Jr. ad announcing their latest menu addition: Crisp Meat Burritos. I'm not at all a big fan of Carl's Jr.; I think it's a pretty sketchy outfit, but naturally, I had to drive through the drive-thru to give these babies a shakedown cruise. They're "mini" crisp burritos served in threes, and three minis is pretty much the same length as one Taco Time maxi. Mexi maxi. Also, they're served with a side of so-called guacamole. 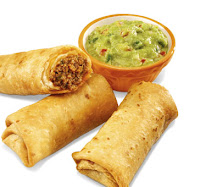 Guess what, my dear reader. FAIL. The tortilla layers were too thick to render the burritos crispy except for the very outer later resulting in textural blah. The filling was remeniscent of an especially tangy Oaxacan pet food. Gross! The guac was virtually flavorless and comprised mainly of unweildy tomato chunks. Plus, they looked at me like I was speaking Korean when I asked for my special pink sauce. The accompanying plain-jane chips and cheese was much more enthralling than the 3 mini main atttractions, which are, as I type this, causing an uncomfortable frizzle and burn deep in my tum-tum.

Tums. I need Tums, pronto. Next time I need a Crisp Burrito fix, it's back to the comfort of home base, 'neath the big glowing Taco Time cactus.
Posted by OrangeTV at 11:24 AM

I love Taco Time and these crisp little sticks of euphoria...or as I commonly refer to them, "cat-butts" Look at the end of one these one time, the nickname will make sense...

Oh My God - so many times I have told my husband about the crisp meat burritos. How my Step Mom and I would get the combo meal at Taco time (a taco, a crisp meat burrito, and beans with cheese) when my Dad bowled on Monday nights in Hamilton Montana.

The crisp meat burrito is burned into my brain and I too get such a craving for it. I KNOW it is so bad for me, but sometimes when I'm in the mall I'll get one.....

I also love Taco Time and those crisp beef burritos. I remember so well when Taco Time first opened in Moscow in the mid-70's when I was at U.of I. You would have thought we had stepped into heaven. Of course... back then Three Tacos for a Dollar Thursdays made a great study break excuse!

Question: What’s Mexican dish is your favorite?
Eight comments on this post so far. Add yours!

What Mexican dish is my favorite?

I'm a sucker for grilled stuff burritos (fast food, Taco Time) and the beef fajitas at Toro Viejo downtown. I always order the same thing when I'm in either place. My wife thinks that makes me too predictable. I simply know a good thing when I taste it.

I love tacos. My resident mechanic is also The.Best.Cook and his specialty is tacos. No mixes. All fresh ingredients and a ton of it. We have tacos and then we have enough leftovers to have nachos (my personal favorite). And then we can have taco salad (just to try and be healthy). I also make a yummy tamale pie.

Camarones (shrimp) - the ones that are wrapped in bacon and fried - oh yum. Toro does them best I think.

I commented on OTVs site last night about the crisp meat burritos though - they are my FAVORITE. The little town I lived in when I was in High School got a taco time - besides Dairy Queen and A&W it was our only other fast food. My Step Mom and I would eat there on Monday's when my Dad bowled. I would get the combo that had a taco, a crisp meat burrito and some beans and cheese. It was the best!!

DFO - It's burritos, not tacos. I'm sorta neutral about tacos.

Incidentally, where I come from, what you have pictured is called “flautas.”

I've been to Mexico many times. You know what they call Mexican food down there? “Food.”

For me it's tacos. Azteca in Spokane has all-you-can-eat tacos for $5 on Tuesdays & Thursdays. I'm there once a month.

I used to get monstrous cravings for Taco Time's Crispy Meat Burritos. MMMMM. I think tacos are just about the best fast-food there is…at least you get some lettuce and cheese in the shell along with whatever kind of meat they use. If you wanna spice up your tacos, use Refried Beans. Again, MMMMM. My favorite Taco John's item was their Taco Bravo. Since I've gotten dentures, I've found out something: It's a lot harder to eat soft-shell tacos than hardshells. And a word about hot sauce: I've wondered why people put so much hot sauce on an item that they can't taste it because tongues are getting fried in the process. “Mild” hot sauce is more than enough for me. The first Taco Time our family ever went to, back in the mid-60s, was in Spokane, located near the Sprague overpass.

Okay, I'll stop this taco-saurus now…but I may have to head out to Taco Hell (Bell) before the night's over.

I am hooked as well. That is why I am trying to find a recipe that copies them. Here in Canada there 3 bucks a burrito. I'd go broke lol.

I used to work at a Taco Time while I was in high school and these tasty creations are very easy to imitate or even improve upon depending on how you spice your taco meat.

Taco Time seasoning is a secret but I do know that one of the ingredients was a soy filler. I think they and most taco restaurants use it because the meat holds better in the steam table when it is used as an ingredient.

My favorite dish at Taco Time was the CMB. I worked my way up to a "shift Manager" at Taco Time at 16 in Coos Bay, OR. I've looked at everyone's comments on how to make one. This is how they are really made.

Every 2 hours you dump the old meat into a bin and refrigerate. When full add a silver packet (about 1/2 lb) of filler (mostly soy) & spices. Next day add a lot of cheddar cheese and cook down. Get a stack of flour tortillas and use a ruler to cut them 10 inches wide & cut off the front. Use an ice-cream scoop for the amount of meat. Roll it out and wet the edge so it sticks together. Fry. Voila, Crisp Meat Burrito. Sound bad, but tastes so good.

Oh my these look amazing. Thanks for sharing thise awesome recipe. Simon