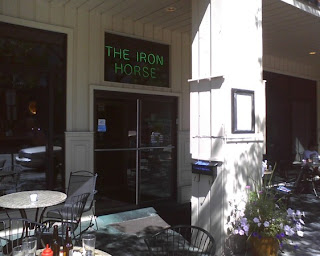 Several years ago I did a few columns reviewing the ancient history of Coeur d’Alene’s restaurant and bar scene, and I made mention of the Iron Horse’s former incarnation, the legendary Brunswick Café. Brunswick owner Bill Webster had always claimed that his food made him famous, especially his cheese soup and his cleverly named “Awful Awful Burger”, both of which were carried over when the place morphed into the easternmost room of the Iron Horse in 1972.

My exact quote was “The Brunswick’s trademark ‘Awful Awful’ burger is still served at the location, which is now the Iron Horse, but unfortunately I hear the burger is now just plain awful.” Just a joke, but the restaurant’s owners weren’t laughing, and word came down the pipeline that in the future they preferred that I not mention the place ever again, nor should I bother to drop by.

Whether my comment was funny or not is arguable, but it wasn’t entirely based in humor. My prior experiences at the Iron Horse hadn’t been so fantastic. Lackadaisical service, questionable cleanliness, and unremarkable cuisine were the main issues, and really, what’s left to love after that? Perhaps they were just having a bad day or two, perhaps a bad year or two, but I can’t say I was too broken up about getting 86’d for good.

So when I decided recently that enough time had passed and hopefully I wouldn’t get beat up or be asked to leave, I arranged to meet a friend at the Iron Horse for lunch. After one of the most enjoyable and relaxing experiences I’ve had dining out in recent memory, I’m happy to finally eat my words and retract anything rotten I’ve said about the downtown landmark in the past. 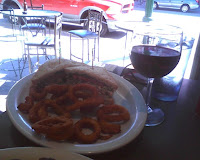 Our first intention was to dine out on the sidewalk, but after two and a half minutes of scorching 95 degree heat, we opted to scamper into the main bar room to a cooler inside table close enough to the sidewalk where we could still do some good people watching. The openness of the Iron Horse’s summertime layout is one of the most attractive aspects of the place and there’s never any shortage of tourists, beachy boys and girls, and random weirdoes to gawk at.

We fell in love with our bartender/server Janel right away. Her demeanor was casual and warm, like dropping by a familiar pal’s garage party for a couple of beers and a bite to eat. My friend and I were in no hurry, we just wanted to chit-chat and relax and after taking our order, Janel pretty much left us to it, only checking in at the exact moment we needed to order another red beer. In other words, she had to visit our table so many times she probably grew sick of our increasingly jovial faces, but even still, her grace remained intact.

Looking over the lunch menu, we were a bit taken aback by the somewhat lofty price setup, with most sandwich and burger options hovering near the $10 mark. We kind of got over it, figuring that they were comparable to other nearby Sherman Avenue eateries, and as we would soon learn, it’s quite worth the cash spent.

I’d already made up my mind before even looking at the menu. I had to order the Awful Awful burger, the very burger whose name I had smeared so viciously. If it turned out to be fabulous, I could finally atone for my gaffe. If not, meh. We weren’t really sure what to expect, but when Janel returned a few minutes later with our plates, we knew that our lunch was, at the very least, delicious for our eyeballs. 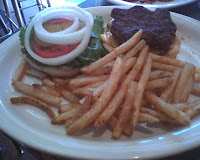 It turned out to be delicious for our tongues, tummies and souls as well. My Awful Awful was two hand formed burger patties, two layers of creamy cheddar cheese, piled high with lettuce, pickle chips and thick slices of onion and tomato. It wasn’t anything tremendously fancy or unusual, but the juicy beef patty was cooked to charred perfection and the toppings were farm-fresh and crisp.

The crunchy golden-brown onion rings sent the whole affair over the top, fresh cut and hand dipped instead of from some frozen miserable bag. My friend said his Vegetarian Sandwich was also so fresh he could barely stand it, piled high with possibly every vegetable in the book of vegetables, barring rutabagas, jicamas and eggplants.

We were rather surprised by how completely impressed and satisfied we were with our lunches, and to recover from the shock we realized we’d have to spend the rest of the afternoon enjoying cold pints of Pabst and Clamato and watching the leisurely world of summertime downtown Coeur d’Alene flash by. It was like a film, one that can only be seen at the Iron Horse, in which nothing much happens and the viewers provide their own witty story lines and narration. It’s a film we plan on seeing again many times in the future.
Posted by Patrick Jacobs at 10:32 AM

Not sure if anyone remembers but the lady who owned Iron Horse used to own Arrowpoint resort back in the early 80's I don't recall her name... Big breasted Lady tho, I used to work there as the grounds keeper when I was a young lad. This was back in the day when normal folks would dock their boats and drink derailers all day and hang out.. Wonderful memories