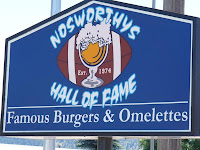 I didn’t need to see a “Please Seat Yourself” sign to know what to do. It’s apparent immediately upon entry that Nosworthy’s is as casual as stopping by Mom’s kitchen for a little visit and a quick homemade lunch. It’s been a home away from home for the many regulars who’ve been frequenting the burger and omelet mecca since it sprung into life as the Ground Round, sometime in the Neo Paleolithic era of Coeur d’Alene history.

The Ground Round attained legendary status early on with its gargantuan burgers that were so fresh they still cried “moo” and omelets big, bright and happy enough to put the sun out of work for the rest of the morning. I can’t recall the exact details of what brought about the name change, but I’m guessing it had something to do with a little legal jazz involving the national restaurant chain of the same name. The forced rechristening to “Nosworthy’s Hall of Fame” was literally the only noticeable change, and the magic remained intact.

Nearly every visible surface is covered with owner Dale Nosworthy’s impressive collection of sports memorabilia, so the name fits the place like a baseball mitt. Dozens of framed, autographed portraits of famous athletes take up most of one wall and colorful team pennants hang in the rafters above the tiny bar area. If Nosworthy ever decides to ditch the restaurant business, he ought to consider reopening as a sports museum and tourist trap, and he wouldn’t even have to change the sign out front. 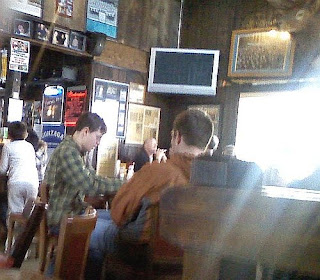 The day I dropped in for lunch happened to be President’s Day, and it seemed like the perfect location to celebrate the holiday. Nosworthy’s has faded wooden walls, giant elk and buffalo heads leering down from high above, and tables repurposed from old cable spools. Not only does it have the rustic look of an old pub that some president might have enjoyed pints of ale in over 200 years ago, but what could be more American than fat, juicy burgers, friendly gals and football recaps on multiple flat-screen TVs?

I walked in and immediately made a beeline to the bar area. The locals there were already a little on the rowdy side, with full glass goblets of draught beers sat before them, and I decided that 11 a.m. was a bit on the early side to be toasting George and Abe anyway. Instead, I slid into a booth near the door and was greeted right away by a waitress who, despite her relative youth, seemed like someone who had mastered the art of waiting tables years ago.

Some of the more intriguing menu highlights include the Willard ‘Hos’ Hosford Burger, which combines cream cheese and sweet-hot mustard, the Sluggo Burger (which formerly held the rather macabre name “the Miss Piggy”) piles on both ham and bacon and the “Superbowl” sandwich, which sounds like it could feed the whole party with copious amounts of turkey, ham, roast beef and both Swiss and American cheeses.

I still couldn’t really decide what to choose when the waitress returned again, so I made a snap decision and ordered the Conan burger with a side of potato salad. I think my eyeball was drawn to it possibly because I’ve had my attention so focused recently on the late night talk-show crisis, and since I fall firmly on the Team Conan side, it seemed like it’d be worth a try. 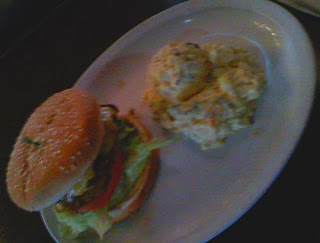 I only had time to finish six clues of my crossword before she swooped back in with a massive white oval plate containing possibly the loftiest burger I’ve yet encountered and a full two scoops of chunky potato salad. I had to let my brain wrap itself around the burger for a moment, so I went for the homemade potato salad first and it was incredible, with a generous amount of black olives, diced pickles, and carrot shreds in a creamy whip of mayo and tangy mustard.

It only took one glimpse at the Conan burger to realize it was named after the muscle bound comic book hero and not the TV guy with the silly red hair. A thick, hand formed beef patty was buried under a gooey slab of real cheddar, sweet grilled onions, and a dollop of whipped horseradish sauce. There was no feasible way I was going to wrap my mouth around the beast. I yanked out the tomato and pickles, which I have no love for on my burger, and pressed the thing down until it was a reasonably edible size.

I probably say this a lot, but this time I really mean it; this was truly one of the most stunningly fresh, delicious burgers on the North Idaho map. The combination of flavors was superb, but it was the high quality of the meat itself that really earned it five stars in my book. The Conan was truly a knockout, and I didn’t regain consciousness until every last incredible bite was gone.
Posted by Patrick Jacobs at 8:51 AM

Hey! I LOVE to read your comfort food reviews. Do they cook the burgers to order there? I like a nice medium/mediumrare burger and a lot of places here won't do that for whatever reason. Was it seasoned enough? I absolutely ADORE a good juicy burger and am always on a quest to find one!

Love the reviews, but I also have a question. Sometimes you give an idea of an establishment's pricing, or even quote what your dish cost, but this review leaves it a complete mystery.
Some burger joints think their burgers are worth a small fortune... it's nice to know that before you walk in the door.

After driving by this place for ten years, wondering if their omlettes were actually worthy of their "world famous" claim, I finally stopped in to find out.

I'd been out early that morning and drove by at around 7:30, certainly late enough for a breakfast joint to be open. Nope, they don't open until 8am, that's odd.
Once I'd set my mind to it, I wasn't going to be denied simply due to inconvenient hours, I returned around 10am. They seemed to be quite busy then and only got more so while I was there.

I took a seat at the bar and was quickly greeted by one of the two friendly waitresses who were working the floor. They do have a long list of omelettes on the menu, but only a couple that really interested me. I like my omelettes stuffed with the good stuff, particularly sausage AND bacon, unless I missed it, there was only one choice on the menu that fit that bill, "Chuck's Delight". I don't know who Chuck is or who gave his omelet such a sissy name, but I wasn't nearly as "delighted" as I would have liked.

My plate arrived in fairly short order and looked tasty. The omelet was loaded with savory bacon & sausage, but was matched by a conspicuous lack of cheese. I believe there was some "cheese product" present, but I'm not sure I could prove it beyond a reasonable doubt. Given the ingredients they had to work with, it's a shame they couldn't seal the deal with a respectable amount of cheese.
While nothing was technically cold, the contents of the omelet were significantly cooler than anything else on the plate, and especially noticeable given how hot the eggs were.
The toast was good, but the hashbrowns were utterly flavorless.
They were the shredded style I prefer, but seemed to be completely unseasoned and lacking any of the fat that make hashbrowns so tasty and unhealthy.

I love hashbrowns and I love cheese... two strikes. I really wanted to like this place, and I think there was some real potential with the ingredients I saw. They just missed it by a little.

I may give them one more try, if only because I really want to try that Sluggo Burger... maybe the burgers are more "world famous" than the omelettes

Such great memories there. Superbowl 1993, in particular. The place was closed - party at Dale's house. Brian and I went in to have our own party.