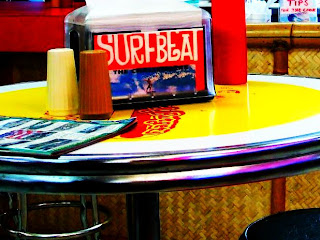 Surfing On Waves of Burger Love

Sometimes the best and most interesting local cuisine is found in tucked away in obscure locations. Every town has those family-run neighborhood eateries that are hidden in plain sight, places you might drive right by all the time and yet never take the time to really acknowledge. One random day your gaze happens catch their sign advertising chicken gizzards or maybe someone finally recommends them to you: “Oh wow, I can’t believe you’ve never been in there; Harry and I stop in every Thursday, they’ve got the world’s best recipe for egg salad, you’ll love it so much you’ll die.” So you do, and it really is the world’s best egg salad but you don’t actually die and the place becomes a regular haunt and you wonder what the heck you were thinking, absentmindedly driving right by there so many times without visiting.

“Longboard Burgers” some wise person suggested to me earlier this year. “Best burgers in town, I’m not kidding you.” Others present nodded with agreement and delight.”Oh yeah, Longboard baby, they’re the bomb. Awesome fries, too.” I honestly hadn’t a clue. “Where? Is that here in town somewhere?” I asked. “Corner of 4th & Appleway, inside the A&D Gas Mart. They’ve got a drive-thru too.” Oh, really? I’d stopped there for some gas or a Jolt Cola every now and then and did vaguely remember seeing some kind of a food setup in the back, but it never seemed to be open so it never occupied any valuable brain space.

Pulling into the A&D Mart the next afternoon, I gave my forehead the V8 slap, at last noticing the massive and quite obvious “Longboard Burgers” signage on the exterior of the building. One sign listed their hours as 11 a.m. to 3 p.m. and unfortunately, it was already after 5 o’clock. I returned a few days later at high noon, walking past the Hostess rack and up the automotive aisle to find a half-dozen hungry folks standing patiently to occupy one of the extremely limited barstools at one of the few two-seater tables or at the tiny lunch counter hidden away in the far reaches of the convenience store. The space is small but attractive, with a modest thatched bamboo surf-hut motif. I espec 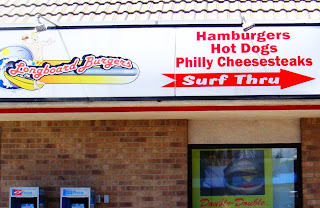 ially like the napkin-holders which were made using vintage surf-theme record sleeves. That first visit, I got my burger to-go, realizing that I’d either have to wait a while for a stool or eat my lunch whilst hovering over the motor oil display. It’s been the drive-thru for me ever since.

The merry folks who run the tiny Longboard grill seem very close-knit and they run a rollicking, well-oiled machine. If they ever find themselves out of work, they could certainly find employment in the entertainment industry. I can’t remember a time I’ve come through Longboard Burgers when they haven’t been cracking corny one-liners at each other and the customers, singing along loudly to the radio, or just dancing the mambo from the grill to the fryer to the cash register. Their fun attitude makes the entire sleepy mini-mart come alive with positive energy, and it’s even as perceptible in the drive-thru as it is in the dining area inside.

The burgers at Longboard are just as great, perhaps even better in certain ways as those served by other local joints that might rank higher on the history and legend scale. However, here they won’t give you dirty looks for wanting fries with your burger. In fact, while the ¼ pound burgers are unquestionably the main star at Longboard, the fries should be nominated for a foodie Oscar for their excellent supporting role. They’re the most authentically fresh and “potato-y” tasting thin-cut fries around, bringing to mind those found at Dick’s in Spokane, which is perhaps the highest of non-hydrogenated compliments.

To get them extra crispy and delicious, they most likely employ the “double dip” method, where they deep fry them to a crisp golden brown, let them cool awhile, then plunge them back into the oil to re-crisp before a sprinkling with salt and tossing a heaping pile into a classic red basket. At the drive-through, they hand over your fries and neatly-wrapped burger in a wobbly, overfilled open brown box that was never meant to hold such weighty cargo, and it takes both hands to grab it to avoid letting it plunge to a splattery death on the pavement below.

I discovered a new favorite Longboard Burger recently, the Mushroom Swiss. Thick-cut fresh mushrooms are suffocated by melted layers of Swiss and the optional-but-so- necessary grilled onions. The Double Double Burger is perhaps their trademark item, and includes two each of beef patties and cheese slices, 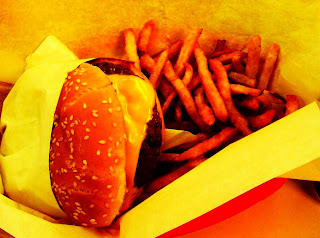 as well as the usual crisp lettuce and thick tomato slice. The Blue Cheese Burger is majestically rich and the bacon on the Bacon Cheeseburger is actually crisp and not sad and soggy. Cost wise, all of these burgers fall under three bucks, which is less than a boring old Big Mac and of course Longboard Burgers come with at least 10 times more love and magic. A smattering of “dee-licious” Philly Cheesesteaks, Breaded Chicken Breast Sandwiches and Hot Dogs are made fresh to order as well and anything on the menu can be ordered smothered in their stupendous homemade chili.

I’ve been told by several wags “in the know” that Longboard Burgers are served “California-style” and that the concept was “stolen” from some old-school diner down in the Golden State. A bit of research turned up something vague about the use of Thousand Island dressing, but otherwise I can only come to the conclusion that “California-style” means “a thick and juicy hand-formed beef patty on a nice big bun layered with your choice of melted cheese and served with the freshest crisp lettuce and tomato in town.” In all honestly, these could be burgers done “Uranus-style.” When they’re this sublime and soul-satisfying, who cares?
Posted by OrangeTV at 12:01 AM

In all honestly, these could be burgers done “Uranus-style.”

Oof, not the most appetizing planet in the solar system.

Yet another OTV review of a place I'd never heard of, and now will check out! Thanks!

By the way, your review of Fiesta Mexicana has turned us into regulars of the place.

This sounds fantastic! Do they have any options for vegetarians? If so count me in!

Question: Had you heard of Longboard Burgers before OrangeTV's review?
Posted by DFO | 1 Nov 12:20 AM

A gal in my office discovered them a couple of years ago and I gave them a mention in The Guide to Dining www.diningni.com in the summer edition. I have a great pic of the burger and fries I'll email DFO if you want to use it Orange.
Posted by KT | 1 Nov 12:26 AM

Eaten there many times. Great joint! The owner seems to be a very hard working good guy. Same for teh guys and gals in the convenience store. Fill up the tank at the gas station and give em a try.
Posted by JIMMYMAC | 1 Nov 1:09 AM

Haven't tried it yet will have to soon.

Tried the place in Athol as recommended here Country Boy? Excellent breakfast.
Posted by Me | 1 Nov 10:29 AM

Such carnivores are we, happy to eat any sort of meat.
Posted by the stickman | 1 Nov 5:23 PM

Wow ate there last week and the food has gone down the tubes! What has happened??

I've been reading this information and when I saw the headline I couldn't ignore it, so it'll be an important contribution if you add something else about the extra crispy advertising.
2j3j

Well, I just adore this kind of food, but Have you ever gone into a Burger King and ordered a whopper... but your sandwich items fall out of the bun before you take a bite out of it? I think we need some healthy recipes to make food burgers at home.