Huzzah! Huzzah! Viva la Longboard. You Rathdrumites sure are some lucky kids now that Longboard Burgers are opening their 2nd store ever in your booming metropolis. Already a popular secret in the A&D Mart on 4th and Appleway in Cd'A, they'll start serving up some of North Idaho's most fantastic burgers and fries starting December 1st in the former A&W in Rathrdrum near Steins IGA. With the equally delish Burger Heaven just a fig toss away, we'd better be prepared for a great big Burger Harmonic Convergence right there in the middle of Highway 41.

Dear Get Out!
Sometimes you do not add an insert with restaurant name and specific address. Very frustrating for "new to neighborhood."

Dear Judy,
No offense my dear, but open your little' ol' peepers. In the paper, look in the little box that says "If you go..." and voila! Ze address. On this site, look at the tippety top of each column and voila! Ze address. As far as you not being able to figure out the name of the restaurant I'm reviewing, I suggest therapy. Also, don't forget Google is your friend. 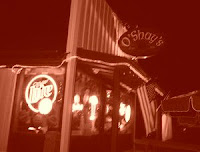 O'Shays Irish Pub has been running an amusing advert in the CDA Press lately featuring a smiling blonde bombshell with the headline "We're Raising the Bar, By Putting Bo Behind It." and goes on to describe new manager Bo as a gal who "knows a thing or two about running a proper Irish pub" and that "With Bo on board, we're so cool we can barely stand it." Oh, realllly? Where's dear Michelle who was the manager when I popped in O'Shays open mike night for one of my very first Get Out columns a few years back?

The white butcher paper that was wrapped around the windows of the Moose Market at 4th & Sherman for a few weeks has been removed to reveal...that the lounge part moved into the store part. Last I checked, the paper remained over the former lounge windows, so who knows if the store idea is gone for good or just being reformatted. When they announced a few years ago they were opening a "grocery store" downtown, I pictured something closer to a quickie mart where people could go for their day-to-day needs and thought it was a great idea. Turns out it was basically just another tourist-geared novelty shop with expensive "local gourmet" products that sat and gathered dust. The Moose Lounge (or is there a new name in the works?) seems to have been much more lively, and I'm glad the owners decided to refocus and perk up Cd'A's night life with another pub/club right on downtown's busiest corner. 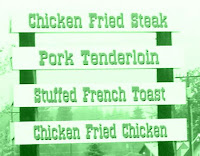 I was very pleasantly surprised to see that you had joined our Country Boy family for an unforgettable chicken fried steak breakfast ( "one of the best to ever cross your radar"). The review you gave us was awesome and really brought a lot of new friends into visit us for a unique eating experience of their own. I was very surprised when one of my "regulars" showed me your review and I realized I had waited on you myself that dark rainy Sunday, and was immensely pleased that it brightened up your day! We love what we do here at the Country Boy Cafe and look forward to feeding you and "Q & A" when you get up in our neck of the woods again sometime. Thanks for the great review, Rosie, Kurt, Scott (aka "Steve"), Sue, and the rest of our tremendously hard working crew!

Thanks, Rosie. I still for the life of me can't figure out why I mistakenly referred to your Scott as "Steve" in my review. Silliness, especially since I had "Scott" written down in all my notes and on the menu. You wouldn't believe how many folks approached me after that column ran and told me they were already huge fans of your place or that they'd been for the first time after reading it and were blown away by your food. Y'all got something pretty darn special going on up there - keep it up! Unfortunately, there's always gotta be an ass:

Dear Get Out!
Re: Country Boy in Athol. Worst breakfast ever !! Especially the chicken fried steak! Were we at the same place ? If you want a wonderful breakfast go to the Fly Shop in Craig, Montana.

Well well, John. You have a black, black heart if that gigantic deep fried, gravy smothered treat didn't turn you on. As for Craig, Montana aka "Trout Town", looks like a nice place to spend the evening drinking cheap beer in a dark, smoky tavern. Were you referring to the Trout Shop Cafe? Indeed, looks like a good place to nurse that hangover the next morn.

A block north of Sherman on 4th Street is the new Morgio's sandwich shop and I've already put a curse on the place. Last week, we walked downtown for a bite and decided to try out an $8.99 "high-end" sandwich only to be greeted a by a door sign chasing away potential customers with the slogan "Cash only, no credit or debit accepted." Well kids, it's the new millennium as the cliche goes and some of us debitheads don't carry much cash. There are plenty of other places to get a sandwich between your front door and the ATM. Actually, I've yet to hear any feedback about their food, positive or negative. Anyone? 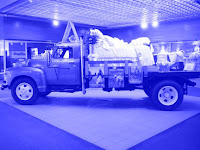 Just because Jack Frost has swept in with his steely nipple clamps and his Blue Raspberry Slurpee breath, doesn't mean the fun has to end for the Farmer's Market faithful. This year they decided to move the whole thing inside the Resort Plaza Shops every Saturday from 11 a.m.to 3 p.m. for the winter and carry on as normal. Brilliant idea. Along with the awesome new Wild Idaho Chocolate Co., for the first time in a long time there are now a few logical reasons to visit the Plaza Shops. Penny candy, knitted dog sweaters, hideous Kincaid paintings, lamb burgers, fresh flowers. All under one copper roof.

First, let me say that my husband and I enjoy your column so very much - not only for the interesting restaurant reviews, but for some of the local lore which seems to accompany most columns in one way or another. As we've been here only about 12 years, reading about Coeur d'Alene from a few years earlier than that is always interesting and amusing!

My reason for e-mailing you is this - we had dinner last week at a wonderful little restaurant in Hayden and I don't believe you've ever written about them. If you did, I missed it and I seldom miss your column, but I suppose it's possible. The name is Kynrede Cafe and it's on Government Way directly across from IIB in a little brown house. We had been told many times that the food was simply wonderful and we finally decided to see for ourselves - and we weren't disappointed! The restaurant is small and intimate with mix & match vintage furniture, maybe a dozen tables, if that. Soft Celtic music plays in the background and you can actually carry on a conversation without shouting to be heard.

The wine list is impressive, and though service is a bit lackluster and the paper placemats are off-putting, we will go there again and again - FOR THE FOOD!!!! The calamari was long tender strips, so crispy, and the sauce is the chef's own recipe and it's amazing. I had liver and onions - not usually digestible in most restaurants, but here, perfectly cooked and so tender I could cut it with a fork. My husband had the coconut prawns - they were huge and again, as delicately breaded as the calamari and fried to perfection! I usually don't eat my vegetables in most restaurants because they are either overcooked and lifeless on the plate, or though cooked fairly well, are absolutely tasteless - rather like green cardboard. These were sauteed in a bit of bacon fat (be still my beating heart!) and caramelized and I actually ate all the veggies before I finished the liver!

We spoke with the chef/owner Jesse, and told him how impressed we were with his cuisine and he was very pleasant and just a 'normal guy' who obviously loves cooking and serving sumptuous food. If you've never been there, I encourage you to try this wonderful little spot, and if you have, then please go again and get the word out about this gem hidden in Hayden. There were only 6 other people there the night we dined, and I'm afraid that he may not be around very long if he doesn't get more business - I don't think he does any advertising. As a business owner, I do understand the importance of getting the word out - and as a lover of great food, I'd like to see this guy stick around for a long time!

Thanks for listening... and keep up the good work! 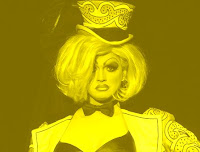 Rumor has it The Torch Lounge at 3rd and Cd'A Ave. is planning on hosting drag queen cabaret shows beginning next year and several of the Dempsey's Divas from Spokane have signed up, including the infamous Courtenay Cocks as well as a few random local amateur "girls". You wouldn't really expect a bar that's known for it's gyrating bikini girls and hard rock to be so gung-ho about hosting drag queens but the idea has wild potential. I could imagine tourists would love something like that, but the Torch will need to keep it from being crass and tacky and do something with a bit of class. It'll be interesting to see who shows up.
Posted by OrangeTV at 11:06 AM

Question: Which eatery do you think has the oddest name? Do you have an odd name to add to this list?
Posted by DFO | 14 Nov 5:42 PM

Taking the high road, I once saw an Italian restaurant named "Endless Pastabilities".

Regardless of how many nickel taps you had, the mysterous white sauce that came on the eggs made for nervous fans.
Posted by larrabee | 14 Nov 9:10 PM

Nic, when we lived in Boise we would eat at the Chuck-A-Rama buffet a couple of times a month. It was the only place we could take the kids where I didn't feel bad about them making a mess on the floor.

My affectionate nickname for that restaurant is "Upchuck-A-Rama."

#2 your'wrong.The name Ground Round was forcibly and reluctantly removed by a legal action from a patent holder of the name in another state.
Posted by jorel | 15 Nov 10:46 AM