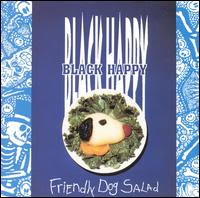 The new group recorded a 7-inch single and signed to the Pacific Inland label, which released debut album Friendly Dog Salad in 1991. Two years later, Black Happy signed with Macola, recording the Peghead full-length and the EP Shoveljerk. Despite sold-out shows throughout the Northwest and the attention of most major labels, the group splintered in late 1994, with Paul Hemenway, Mark Hemenway and Greg Hjort re-forming as Shoveljerk. In late 1995, Capricorn Records released The Last Polka, a collection of live tracks and outtakes. ~ John Bush, All Music Guide

Misc. Web Commentary:
"As a teenager growing up in the Pacific NW, it wasn't Nirvana or Pearl Jam that everyone was listening to. It was all Black Happy for us. The best concerts by far."
"These guys continue to be on of my favorite bands. They rocked live!"
"Dude that guy is my religion teacher in school....the Hemmenway guy is"
"I worked with Black Happy for the better part of two years...if there is any NW band from the early 90s that should reunite for one show it is Black Happy."
"There has been NO bands that even resemble these guys. I hope they know people still talk about them all the time. They should do one more show... at least if they can round up 9 guys, remember their songs AND get along."
"My first concert ever was Black Happy when they played in the TriCities area, Eastern Washington, right after the release of Peghead. I will forever miss them, no band was so full of rock and yet so kind."