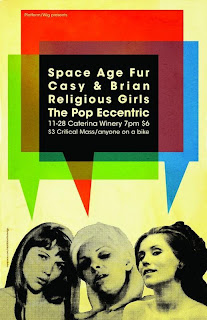 This rather mysterious Cd'A gang makes an especially lovely brand of droning primarily instrumental psychedelic rock that divines inspiration equally from the trippy 60's (think the Beatles "Tomorrow Never Knows"), the experimental 70's as well as the underground dream-pop of the 80's, ultimately sounding like a jammier My Bloody Valentine or a way noisier Ummagumma-era Pink Floyd. Definitely one of Cd'A's most unique young bands and they've already made a name for themselves in Spokane's flourishing New Shoegaze scene that seems to have gained prominence in the Lilac City of late.

They've even been mentioned favorably in the pages of the Inlander a few times recently for their very loud, trance-inducing gigs. I'd love to see a hometown show but where? Most venues here are set up for intimate acoustic guitarists strumming all folksy-like, not the waves of crashing guitar noise and feedback created by the Pop Eccentric. For now you'll have to head west and catch them at one of their SpoVegas gigs like the one at the Caterina Winery as advertised in the flyer to the left. For now follow this link to download mp3s of a weird, warpy sounding cassette recording of an excellent recent gig. Get into a recording studio, my sweets, and pronto!

MP3: (Right-click and Save)
Song for Another Day
We Will Live in the Space Age
Posted by OrangeTV at 12:01 AM