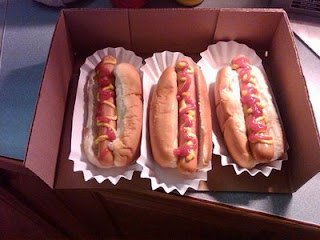 Some years, I tend to get a little over-extravagant around Christmas time and end up spending pretty much my every last dime. I like to gift people with gifts they might actually remember and use and I also enjoy going out for nice dinners and festive nights on the town. These things are never cheap, and this year was no exception. Now that the yuletide cheer has faded, my bank account is as empty as my cup of hot buttered rum at bedtime on Christmas Eve.
Still, one must eat and when cupboards are bare, desperate times call for desperate measures. In times of poverty, I know that digging around in the dark areas of the couch or car will unearth at least enough coins for a satisfying and classic favorite; three hot dogs for $1.39 at Gittel’s Grocery in Coeur d’Alene.

Searching online for details about the subject, I came upon a blog post, written by former local resident Jake Donahue, in which he eloquently waxes poetic about the wonderful wieners at “the Biggest Little Store in Town”. His brief haiku showcases the typical emotional and physiological response to this divine lunchtime tableaux. “My mouth salivates/Three for a buck thirty-nine/Hot dogs are pure bliss.”

It’s unknown exactly when Gittel’s became the sacred homeland for this holy trinity of hot dogs. Elton Gittel might have decided to serve up discounted frank triplets on opening day way back when, or perhaps one of the many Gittel descendants who’ve run the store in the decades since had the winning idea. Either way, it’s been one of the most legendary lunch bargains in town for as long as I can remember. 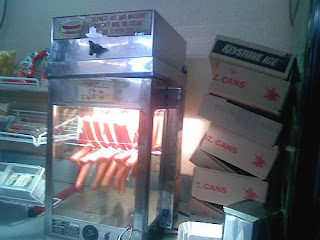 I had a roommate long ago who actually managed to lose a bit of weight by guzzling water and eating nothing but three plain Gittel’s dogs every day for both lunch and dinner. Probably not the healthiest way to go about it, but at the time the special was three dogs for 99 cents, ensuring that he always had lots of money left over for something to stuff in his bong.

Recently, a friend of mine offered to take her mate to lunch to celebrate their 10th anniversary. “Surprise me,” said her lover and they ended sitting up at the lone picnic table on Gittel’s front lawn, holding hands and enjoying cheap hot dogs together in the autumn sunshine.

There’s no hype involved in a Gittel’s dog. There’s no piled-high Chicago-style action with mustard, onion, sweet relish, a dill pickle, tomato wedges, and pickled peppers. You won’t find any German sausages, brats, kielbasas or cheese-filled Ballpark plumpers. The counter is completely devoid of extravagant toppings or condiments such as sauerkraut, bacon bits, mayonnaise or coleslaw.

Nope. What you get here is all you really need; plain old ketchup and mustard. It’s available in two squeeze bottles, one colored retro red and the other yesteryear yellow. If you prefer not to squirt condiments in public or want to avoid messy accidents in the car, they’ve also been benevolent enough to provide to-go packets for those on the go.

The creative topping options do expand some if you explore the aisles of Gittel’s tiny grocery section for inspiration. Spray some Easy Cheese all up in there, pour on a can of cheap chili, and sprinkle it with crumbled beef jerky. Voila! It’s a poor man’s Coney Island dog. Hot dogs are the single, solitary item on the Gittel’s deli menu, and if for some odd reason, you only want one or two, you’ll have to pay the jacked-up price of 59 cents each. 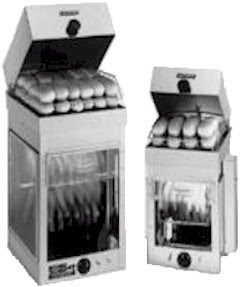 The dogs at Gittel’s are a self-serve, and they fire up the machine just in time for breakfast. Certainly, a Glenray hot dog cooker like the one Gittel’s uses hasn’t been available since at least around the time when TV’s “Fantasy Island” was cancelled. The wieners are skewered roughly on a rotating steel spit with spikes and broiled under a hot lamp. This lends them the sweaty, tan complexion of that show’s ever-smiling host, Ricardo Montalban, however their length is more akin to the height of co-star Hervé Villechaize. Sill, they’re sufficiently juicy and tasty, and when you’re getting three, who cares?

The steamy white buns are warmed in the upper compartment and are always fresh, but require some delicacy as to not cause unnecessary squishing or tearing. Cardboard beer boxes are halved and piled up next to the machine to use as trays that perfectly fit three dogs. The only extravagance is the white paper hot dog holders which do a great job of holding together their cargo.

If I get extra lucky in my scrounge for pennies and find a few crumpled dollar bills in an old pants pocket, I might throw in a bag of Sun Chips and a bottle of lemonade, and really feel like I’m living it up. However, with Gittel’s dogs, add-ons aren’t even necessary to feel like a hot dog pauper in emperors clothing.
Posted by Patrick Jacobs at 12:00 AM