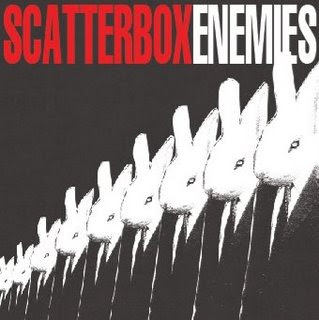 Officially released on Feb 10, Enemies, the latest disc by veteran Coeur d'Alene punk quintet Scatterbox is full of throbbing Eurodisco and light-hearted synthesizer pop. Just kidding. It's brimming with the same raw hardcore circa-81 punk that's filled all their albums to date. It's really a classic case of "if it ain't fucking broke, don't fucking fix it." Thing is, the more they keep fucking doing it, they better they get at fucking doing it. And they're pretty fucking good.

Actually, there are a handful of new production flourishes such as the Satanic back-up voice on "Null" and the relatively loose arrangement of opener "Barf Lies", which at over three minutes is positively epic for Scatterbox, whose songs usually rattle by swiftly under the two minute mark. The tempo is fast throughout, and fans of pop crud like Cobie Callat or One Republic might as well just stay at the mall; this is classic punk at it's most raw and visceral.

Highlights include "Skull", which has some great catchy hooks hiding under the shouting and noise, and the mockingly dark "Scenester Do's and Don'ts", in which (I think) singer Tom White rants about all those cheeky little emo kids who think they're so all that. White's not having it, and frankly neither am I, because all that "emo" crapola truly pales next to the angsty, amphetamine drumming and pissed-off power riffs of Enemies. Coeur d'Alene residents should be damn proud to have these guys representing their town in the punk rock races.

Enemies is available at The Long Ear record shop in Cd'A and via their label Blackhouse Records,
as well as Amazon.com, CD Universe, etc. It's bigtime, folks.

Listen to a preview of Enemies tracks here.