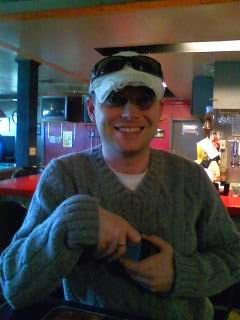 I got a feel for the we-don’t-mess-around charm and earthy personality of Susie’s Bar & Grill before I’d even stepped in the front door. Directly to the right of the entry sat a local newspaper’s blue vending machine upon which was taped an enormous hand-scrawled note. “Dear Dumbass” it started out endearingly. “Are you making a lot of money from this machine? Apparently you haven’t noticed that something’s amiss, namely that the coin slot is plugged and has been for weeks. Yet you continue to refill it each day with new papers. What gives?” The note itself was a bit tattered as if the newspaper man was un-taping it, refilling and and re-taping it, just to return the dose of snark.

There aren’t many places left in our modern realm that harbor such a rarefied, historic aroma like the one that hits like a whammy upon entrance to the bar portion of Susie’s, where Q. and I landed one recent Saturday morning. It’s a mix of cigarettes, dust, the men’s room, heavy cuisine, beer taint, and loads and loads of time. Not that it’s necessarily a terrible odor, in fact it’s oddly comforting, reminiscent of an era when it was possible to sit down with your neighbors and loved ones and have Whiskey Sours and Pall Mall Lights with your bacon, eggs, and hotcakes. It’s a scent that seems to have been present in nearly every diner/lounge or truck stop I dined at as a child in the 1970’s, the last truly carefree era before health freaks ruined it for everyone with their overwrought concerns about the dangerous effects of second-hand smoke, trans-fat and getting drunk by noon.

Even Susie’s main room is a time-trip back to the hazy, cave-like dining spaces of my childhood. When Q. and I poked our head around the corner to check it out, we were met by the gaze of an elderly couple, the only souls occupying one of the chartreuse vinyl booths. They looked like shipwreck survivors on a desert island, bearded and unwashed liked they’d been stuck there for decades. We had a similarly eerie feeling a few minutes later after we’d returned to our table in the bar zone, when a specter-like gentleman with a full, droopy mustache and old-fashioned cowboy hat appeared seemingly from out of nowhere and floated across the room silently, vanishing behind us. We both looked at each other with unspoken concern. Were we seeing ghosts up in here?

Susie herself was incredibly friendly and chatty and seemed oblivious to the haunting, choosing instead to sing along loudly to the country music beaming in at full blast from the airwaves and entertain a couple of regulars who’d saddled up to the bar for their pre-noon Bull Blasters. I get the impression Susie’s has a ton of regulars, a tight-knit family of Susie fans who return time and time again to enjoy her down-to-earth presence and made-from-scratch cooking. 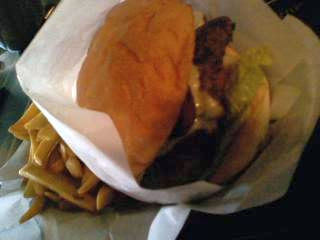 I’d been tipped off by a couple of different readers that Susie’s served up one of the best burgers around, and I’ve never been able to resist putting that claim to test, so I decided to leave my diet in the car and go for the Mushroom Swiss variety. Q. announced that he was feeling a little spicy, so he ordered Susie’s daily special, a breakfast mess called a “Red Hot Louisiana Sausage Scramble.” Kokanee? No, I was driving, so I had to resist doing as the Romans were doing and got a nice, tall Pepsi instead.

The menu at Susie’s Bar and Grill in Hayden is ripe with mirth and entertaining moments. “Best burgers anywhere,” it boasts, forgetting endless competition and going straight for the crown. “Beef- it’s what’s for dinner” it demands in a bold font, and Susie represents, throwing down your choice of Kentucky Devil Bourbon, Blue Cheese, or Smothered sirloin steaks with optional hand-breaded Jumbo Shrimp just for extra bling. The “SSS Omelet” will have you hissing like you had snakes up in your basket, with it’s brazen combo of spinach, swiss cheese, sausage, and even ‘shrooms.

If you’ve been sitting lonely night after night wondering where to find some juicy beef testicles, you’re finally in luck. Susie’s is one of very few places around featuring that exotic cowboy delicacy Rocky Mountain Oysters on its list of appetizers, complete with spicy cocktail sauce. For those who want to really go all the way with the idea, there’s the House Specialty “Hot Nuts”, which is Rocky Mountain Oysters fried crisp, smothered with green chile sauce and melted cheddar cheese, and served with a tortilla. Normally, I’m gung-ho to try new and bizarre foods, but my still bar-queasy tummy suggested it wasn’t in the mood to experiment. I pointed out to Q. the “Hot Nuts” on the menu and dared him to try them, but he winced and said “Um, no. I’m trying to cut back.”

Our lunch took its own sweet time to arrive, but at Susie’s, everything is made fresh from scratch to order, and when our meals arrived, we forgot all about the wait and time in general. My burger was a five-star specimen, so mammoth I had to take Q’s advice and eat it upside down to keep from spilling melty Swiss and crisp lettuce on my lap. “Best burger anywhere” is arguable, of course, but with a huge, hearty beef patty as succulent as this, it indeed ranks high on the list. Q., on the other hand, wasn’t over-the-moon about his Louisiana Sausage scramble, saying it tasted like “old bar grease.” I tried a few bites, and delightfully, he was right! It was a flavor I actually enjoyed mingled with the dense potatoes and spicy sausage bites.

I’d bet this place gets exceedingly rowdy at night, when the pool balls crack above the din of Country karaoke and patrons work hard at contributing to the aforementioned timeless aroma. On the surface, there’s certainly nothing fancy about this well-worn building that has survived so many decades with dozens of incarnations. It’s Susie, her crew and her crowd of regular visitors that provide the place with its pulsing heart and soul.
Posted by OrangeTV at 12:01 AM

The guy you saw in the cowboy hat, that had the handlebar mustache, probably didn't just get there that morning but had slept on the couch after countless hours of throwing back shots with my ex. Oh wait, by the way has anyone seen him?

IF YOU WANT A BLOW-JOB FOR YOUR BIRTHDAY.SUSIES IS NOT THE PLACE! I RESPECTFULLY ASKED SIX DIFFERENT WOMEN, AND WAS REFUSED BY ALL! OTHER THAN SUSIES IS A GREAT PLACE.

let me memorize the direction, because thanks to you now I gonna take my car, call my girl, and go to this place, you are happy now? because I happy now.

It's a very nice place... well, actually haven't been there, but the place seems to be very good and the dishes delicious. I hope I will visit it in the next couple of weeks.

I know this place well from back in the day when it was Schoonerville and Gary owned it. But I know Susie and she is a great gal. It used to get a little rowdy there but I was part of it.

Is this the same Susie that owned the biker bar in Golden, CO? If so, somebody tell her Guitar Steve from the old Buck Snort days is looking for her....