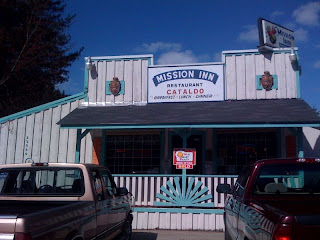 “Sit wherever you like guys,” the cheerful voice beckoned from somewhere behind the world’s most massive jar of pickled eggs. Our petite but formidable hostess emerged from the bar to deliver our menus and tousle her terrific feathery blonde mane. “The coffee’s hot; I just made a fresh pot.” “Okay, yes, I’ll have a cup,” shot back Q. oddly, as if in trance. “Actually, just an RC for me, thanks,” I ordered, noticing that Q.’s face had suddenly turned an exquisite shade of clam chowder gray.

When she was gone I asked Q. what he was tripping on. “Oh my god, she’s exactly like my mom. It’s uncanny. She has my mom’s same tiny build; she’s got my mom’s nose and eyes, my mom’s tight little buns. She talks like my mom. She even smells like my mom. White Diamonds by Liz Taylor.”

“Weird. Separated at birth?” I offered. Q.’s Fake Mom reappeared swiftly with our beverages, already ready to jot down our order. “A few more minutes please,” I asked. We hadn’t even cracked open our menus yet. Q. doctored his coffee with cream and sugar and took a big sip, his eyes as wide as the day’s sunny blue sky. “You won’t believe this. Her coffee even tastes exactly like my mom’s.” 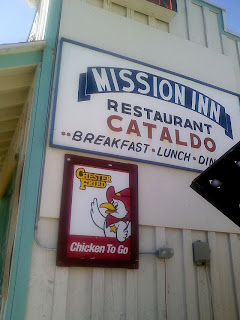 “I’ll take your word for it,” I assured him, having never actually tried his mother’s coffee, or met her at all for that matter, since she resides in a far away state. “Maybe you should call her and make sure she didn’t pull a soap opera maneuver, you know, a tragic head injury causes amnesia which leads to a new life as a waitress in a small town Idaho diner where she has a chance encounter with her long lost son that suddenly triggers flashbacks to the old life she once knew. It could happen.”

The Mission Inn specializes in traditional American cuisine and while lunch offerings are primarily casual, the dinner line-up is a bit fancier than I might have suspected. Rib Eye Steak tops the list, followed by a New York Strip, Tiger Prawns, Pan-Fried Oysters, and the massive Captain’s Platter, which combines baked cod filets, jumbo shrimp, oysters and scallops into a landlubber’s ocean fantasy. Delightfully, they also serve that trans-fatty lust food known as Chester Fried Chicken, a rarely found favorite which I’ve only ever seen locally at Coeur d’Alene’s Petersons Foods (formerly IGA). It sounded really good to me, but Q. wasn’t so into the idea and I didn’t want to tackle a 4-piece order solo.

Anyway, it was still lunchtime technically, so I turned my gaze toward that section. The Chef Salad, the French Dip, the BLT, the Patty Melt, the Ruben. The good old gang all together again. Only the Maui Chicken Sandwich and Hawaiian Burger dared to do anything slightly out of the box with their wacky pineapple rings, ham and Swiss cheese. The hostess returned after giving us another 45 seconds to decide. Rushed, I spontaneously picked the “Cataldo Burger” which included grilled onions, ham and Swiss and a side of “Joes”, and Q. ordered Keith’s Burger probably because I was paying and it was the most expensive lunch option on the menu.

As soon as Q.’s Fake Mom returned with our lunch, I immediately realized it was worth the money spent just to be able to lay witness to his monstrous creation. The Keith is the burger world equivalent to sandwich land’s “Dagwood”, easily measuring over six inches tall and composed of two thick beef patties, a slice of cheddar, a slice of Swiss, bacon, thin 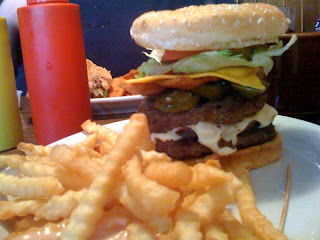 -sliced ham, grilled onions, jalapenos, lettuce, tomato, and pickles. My Cataldo Burger was no small fry either, but it still cowered in the shadows of the cartoonish, colossal Keith. Still, I wasn’t at all disappointed. Mine was just as melty-delicious and the Joes were the best I think I’ve ever had, breaded and double fried to a crunchy consistency outside and a tender mushiness inside.

The Mission Inn has a roadhouse ambience, with beer posters of bikini babes and an 80’s splash paint job on the walls colliding with Old West elements and inexplicably, a large collection of German beer steins. When I went up to the bar to pay, I just had to ask about that huge jar of pickled eggs. Yes, indeed they were made on site from scratch, and if I’d not already been so stuffed I would have attempted one of the gassy little buggers.

In the parking lot, we shared a few moments of spring sunshine with a charmingly gossipy lady who smoked a cig and enlightened us to the fact that the Mission Inn had changed hands recently but that the new owners were happy to retain all staff, including Q.’s Fake Mom who had been there for over a decade. She named us some great out-of-the-way backwoods diners that she insisted we had to check out someday soon. We promised her we would and waved bye-bye before bopping back onto I-90. 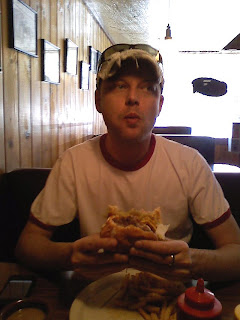 Q. had never actually visited the Old Mission State Park, so we decided to make a stop there on the way back. It was a sunny day and there were a couple of random tourists milling around, but sadly the shiny new visitor’s center wasn’t open yet. We sat on the rickety pews inside the church itself for quite awhile, relaxing and enjoying the solemn tranquility and sense of history inherent within Idaho’s oldest standing structure.

Walking down the hill to the old cemetery, Q. managed to slip on some mud and open a bloody gash in his hand while catching his fall on a sacred patch of earth. Afterwards, he kept complaining that he “felt really weird” and wondered if he had inadvertently allowed an evil spirit to enter his body through his open wound. With that, I had to smirk and ask “How could there possibly have been a spirit even more evil than the one that was already inside you?” He chose not to respond but I swear I could hear his eyes rolling in their sockets.
Posted by OrangeTV at 10:34 AM

Well, now I know the place I will try next time I head home to Kellogg. It sounds exactly like the type of place I love enjoy... and believe it or not I have still never tried those pickled eggs and I have spotted them at many a bar in north Idaho.

Question: Have you ever met someone who reminds you of your mother? Who? When?
One comment on this post so far. Add yours!

Yep. In the bathroom mirror brushing my hair one night. I was in my mid-twenties. I just stared and wondered when *that* happened.

Oh please... this is not a restaurant... this is a junk food place... anyway, bad post men you lie about it haha

It's obvious to me that ol viagra is on more pills than just the blue ones and certainly doesn't know the difference between fast food and homemade food. The food is excellent and the atmosphere is wonderful!