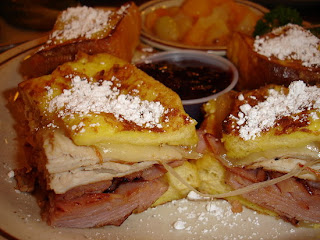 Tender sliced Ham and Turkey with melted Swiss or Gruyere cheese on thick-sliced white bread, then dipped in it's entirety in egg batter and cooked like French toast. Sprinkle with powdered sugar and serve with a side of strawberry jelly for dipping. It's a lovely concept, birthed in France under the name Croque Monsieur. The name "Monte Cristo" is thought to be a tribute to the French novel The Count of Monte Christo by Alexander Dumas. Oui, oui! C'est delicieuse!

The Monte Cristo is believed to have first appeared on American menus in southern California in the 1950s. In 1966, it appeared on the menus of the Blue Bayou and Tahitian Terrace restaurants in New Orleans’s Square in Disneyland. This was the big break the sandwich needed; suddenly it became "in vogue" in an era when the fact that contains at least 1500 calories and endless grams of fat meant nothing to anyone. Gradually, it's popularity dwindled and now-a-days it's quite an unusual thing to see listed there among the BLT's and Grilled Chicken Clubs.

I recall Monte Cristos being everywhere when I was young in the '70's and early 80's. In fact, I remember specifically my grandparents frequently taking me to eat at TJ's Pantry, located in the North Shore Hotel, now the Coeur d'Alene Resort. That place was dark and cavernous, done in browns and oranges and closer in spirit to a greasy spoon than the comparatively fancy offerings of Dockside. Anyway, I remember always ordering the Monte Cristo with a big pile of fries, then sneaking off to play Space Invaders in the arcade area next to the indoor pool while my grandparents drank pot after pot of coffee and chainsmoked.

There's something refined about the contrasts involved. It's the sweetness of the powdered sugar and jam versus the tang and salt of the ham and cheese. It's the warm gushiness of the inside versus the golden crispiness of the fried outer layer. I want! 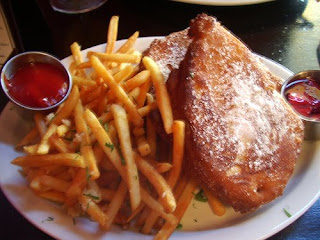 I searched the web looking for local places that still serve this now-rare delicacy and found what I found listed below. I'm thinking there must be more, so if you've encountered the lusty Monte Cristo somewhere I didn't mention, please do share in the comments section. I'm thinking I'll try at least these place's offerings for a future Get Out column dedicated to mon sandwich de l'amour.

Granny's Pantry in Rathdrum lists a Monte Cristo for $8.95

Wolf Lodge Inn has a Grilled Monte Cristo for 11 dollars that is "tender ham, turkey, swiss and cheddar on egg bread, accompanied by our own special raspberry sauce."

About Mallards Restaurant in Red Lion Templin's Hotel, Ron Nilson was quoted as saying "the omelettes are topnotch and their Monte Cristo sandwiches are a rare find elsewhere these days"

Email ThisBlogThis!Share to TwitterShare to FacebookShare to Pinterest
Labels: I Heart, Retro, Sandwiches

The Breakfast Nook has a kick-ass Monte Cristo.

Question: Did you even know what a Monte Cristo was before you read OTV’s comment above?

I did. Maybe it dates me. It used to be my favorite after theater “snack” when I frequented the Pittsburgh Playhouse. Though they are hardly a “snack”!

Yes…I've had a Monte Cristo before….I can still feel it's effects in the nice warm fat surrounding my heart….mmmmmmm fat.

The Monte Cristo is probably the most irresponsible sammich in the world.

OMG…I didn't realize they went out of style. I just thought it was a regional thing, since I've moved around so much.
I “heart” Monte Cristos.
But I'm with Toad…they sure ain't health food.

Yup, hubby LOVES them, so it is a challenge to find places that make them and make them well.

Last Monte Cristo I ate was awful. I was driving south on I-5 late at night after working a state basketball tournament in Tacoma when I stopped at a mini mart to grab a snack. I hadn't eaten for hours and need something. In the case among all the packaged sandwiches were egg salad, chicken salad, ham and cheese, meatball, turkey and swiss and several other types including a cold Monte Cristo sandwich. I grabbed the Monte Cristo because the name was interesting. Along with a chocolate milk, some Doritos and a muffin I had a pretty good meal for the rest of the drive or so I thought. Not sure if I was supposed to microwave the sandwich or what but it was the absolute worst thing I had ever tasted and I've never really been all that selective about food. These days, due to my health, I would never even consider such a meal.

The Beacon downtown has a very respectable Monte Cristo.
No powdered sugar tho. :(

I remember the “Count of Monte Cristo” from radio days.

Had my first one when I first arrived in Idaho, back in 1965. And it was at the North Shore!

That was the best part of going to the Cresent downtown when i was a kid. they had a lunch counter and their Monte Cristo was heavenly, haven't found one half as good since.

First make French toast, slap jelly on one side and make a turkey melt with the other. Then scatter powdered sugar on both sides and serve warm.

I have a recipe for it somewhere.

The now defunct Riverstone Grill had great Monte Cristos. I love them and make them every so often.
Breakfast Nook's are a close second to homemade.

I love a Monte Cristo! When I was younger, much younger, this used to be a gourmet sandwich that was only served at country clubs and golf resorts. My son and I have often wondered where it was we ate locally that had a Monte Cristo, now we have a list to exhaust.