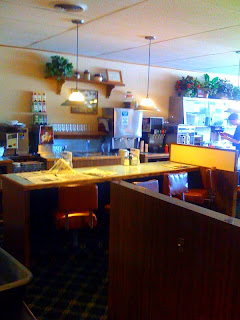 Don't Go Chasing Waterfalls, Please Stick to the Diners and the Drive-ins You're Used To.

I manned a local tourist info hut for a while, and people would ask me an odd question from time to time. “How much does it cost to ride that ferry boat up north a ways from here? I can’t remember what it’s called; I saw it on the map,” they’d inquire. “You mean Bonners Ferry?” I’d reply, knowingly. They’d nod their heads in recognition. “Actually, that’s just the name of the town. The ferries quit running about a hundred years ago. There’s just a bridge now. “Aw, really?” they’d sigh disappointedly, and I’d tell them about the town’s nifty “Barber Ship”, but few paid attention, their minds having already wandered toward the next tourist trap on their list.

Ferry-less Bonners Ferry was the first stop recently on our recent sunny day trip to explore the northernmost parts of Idaho. We wanted to see some waterfalls, so I’d spent the prior evening researching online, even going as far as to make a Google map pinpointing all the regional falls I could find. Most of them are in Boundary county, so Bonners Ferry seemed like a natural place to stop and grab some lunch before heading deep into the lush green wilderness the afternoon. We cruised into the historic downtown area to find it alive with people meandering around enjoying the warm spring weather, from patrons at an outdoor farmer’s market, to friendly felons in bright orange jumpsuits, smiling and waving cheerfully as they picked up litter and mowed the courthouse lawn.

The trip to Bonners usually seems pretty quick, but it took us nearly an hour to get through Sandpoint due to the traffic gridlock of the “Lost in the 50’s” gala. We’d been in the car so long that when we pulled up to the Panhandle Café for lunch, we had to duck walk in with stiff, painful legs. We felt like a couple of old geezers but we’re nowhere near as ancient as the Panhandle Café, which is like a wonderful way back machine to about forty years ago.

“Wow, that’s real Naugahyde”, amazed Q. looking at the sea of shiny brown booths. I humored him, “Yeah, so much better than the fake stuff.” Pies gleamed from inside steel and glass coolers affixed to the wall behind the linoleum counter, next to a collection of old fashioned milkshake makers, soda machines, coffee brewers, milk dispensers and soft-serve ice cream squirters that make this historic eatery so delightfully retro. 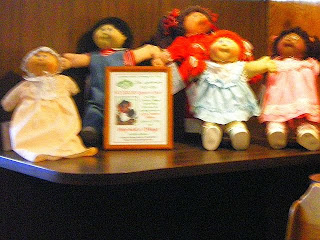 The place was lively and we claimed a quiet spot near the kitchen where we could plan our waterfall chasing adventure. I gasped in horror at the large display of Cabbage Patch Dolls set up across from our table, all staring back with glowing eyes like the children in “Village of the Damned.” Nice touch. Our waiter Ryan was fantastic, his youth in stark contrast to his surroundings and much of his clientele. “Would you gentlemen like something besides water?” he offered. Gentlemen? Wow, I wasn’t sure if I should feel flattered or just elderly. Our coffee came and we began analyzing the extensive menu.

The Panhandle Café serves exactly the kind of traditional fare one would expect to be served in 1974, a good year for diner food. The cut-off time for Breakfast is 11 a.m., so come early to sample the Muffin Sandwich, the Shrimp and Swiss Omelet, or the Woodchopper’s Special, a giant combo starring pancakes, eggs, and bacon or sausage. Come later for dinner and investigate the Top Sirloin or Teriyaki Streak with a baked potato, green salad, and garlic toast or a basket of Chicken Drummies. I ordered the clam strips and fries, and decided to make it a double clam whammy by ordering a cup of clam chowder. Q. strayed from his normal Bacon Cheeseburger jones and requested their BBQ’d Beef Sandwich, switching from potato salad to fries at the last minute. 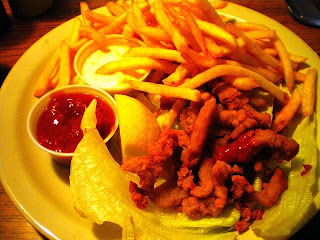 Only moments later, Ryan tangoed out of the kitchen with our hot plates. “Anything else right now, sir?” he piped. Sir? Okay, I’m officially old now. Oh well, who cares when you’ve got homemade clam chowder so hot and thick and bursting with flavor and creaminess. Whole tender clams and melt-in-your-mouth potato chunks mate in sheer ecstasy for the taste buds. Yes, I’m raving; it was the best clam chowder I think I’ve ever had.

Meanwhile, my clam strips were tasty but quite greasy, swimming in a shallow pool of cooking oil on a crisp lettuce leaf. I didn’t think the fries were terrible at all, but Q. rejected his, wishing he’d gone for the potato salad instead. His BBQ Beef Sandwich rated much better, but was messy enough to end up down the arms of even a consciously neat eater like Q. We left full and satisfied both with our lunch and the friendly service, ready to see some waterfalls.

We quickly realized the Google map I’d so meticulously put together was useless. iPhones receive no signal in the middle of nowhere where waterfalls tend to be. The drive was gorgeous with the still-snowy Selkirks hovering above, but we felt aimless, trying to go by memory, just looking for clues. Finally, we spied a sign for an overlook point above Moyie Falls. We could hear but not quite see a waterfall somewhere down in the bushes, but sadly the main sight was a poor dead kitty abuzz with flies that someone had heartlessly tossed into the ravine. With that, we began our trek homeward, having decided that from now we would heed the advice of those great 90’s philosophers TLC and just stick to the rivers and lakes that we’re used to.
Posted by OrangeTV at 9:34 AM

I heard they make great pancakes in Bonners Ferry. Well that town has it all. It would feel very great to live there.

This is a really good post. Must admit that you are amongst the best bloggers I have read. Thanks for posting this informative article