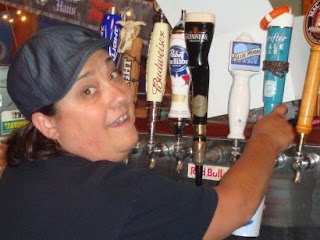 Sam Middleton has a weird thing for Kristy McNichol, but really, who doesn't? The "Little Darlings" star is just one of the Mik-n-Mac's bartender/postal carrier's many 70s and 80s oriented fetishes. Pop into the bar some random afternoon when she's working and I can pretty much guarantee she'll kick your ass a game of "Name That Satellite Radio 70s or 80s Tune" and she won't be afraid to remind you with a big smile that you're a big loser. Sam hates everyone equally, but in the most delightful way possible. Recently, she was nice enough to clue us in on the local things that put the foamy head on her freshly poured pint of Pabst Blue Ribbon beer.

1. Favorite place to go for breakfast: The Country Boy in Athol. Rosie and the other gals rock and I love the cinnamon rolls and bacon, obviously.

2. Favorite place to grab a sandwich for lunch: Well, I used to go to San Fransisco Sourdough but now I would have to say Subway. I'm always looking for the deals and the $5 Foot Long is a catchy little ditty.

3. Best Mexican restaurant: Toro Viejo all the way, baby. Love Ruben and his peeps, plus Ican always go next door (Ed. note: to Baja) and see Christa and Zach.

4. Best Chinese restaurant: I like Panda Express but that shouldn't really count. Now I would have to say the place in Rathdrum, I have no idea what its called (Ed. note: Wah Hing), I just know how to get there.

5. Best place to get sushi: I just go to Bonsai Bistro. I tried Takara once and it was good. I keep trying to get to Syringa, but I have to take Rita with me and she's a pretty picky eater.

6. Best fast food joint: Well, I worked at Wendy's for 12 years so I am pretty partial to them. But when the chips are down I run for the border. And does Gittel's Grocery 3 for $1.39 hot dogs count? If so then definitely them. Those dogs pull at my heartstrings...

7. Most frequented bar or nightclub: That is a hard one but seeing as you know where I work I'm gonna have to say Mik-n-Mac's, ha ha ha ha. But really, I don't go out much. I do try and get down to Baja to see Christa though.

8. Someone offers to buy you a drink. What do you order? Wow, these are hard. Okay, since I almost killed my liver in my late teens to mid-twenties, I don't find drinking the fun it once was, but I am a beer drinker by nature so a Bud Light. For a shot I would have to say bubblegum vodka and Red Bull.

9. If you were a flavor of ice cream, what flavor would you be and why? Rainbow sherbert. I like the colors and it has more than one flavor in it and it's fruity. You know how I like me the fruity ones.
Posted by Patrick Jacobs at 12:00 AM

definetely this guy know all the good places in the town, for sure he spent a lot of time testing each place.