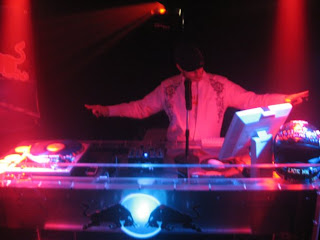 Feeling dancey? You can catch DJ Brentano making hips, feet and various other body parts move at either The Torch Lounge or Baja Bargarita, both in downtown Cd'A. He was nice enough recently to let us know what local food and drink opportunities put the throbbing bassline in his hot Rihanna remix.

1. Favorite place to go for breakfast: Depends on the time of day. If it's when normal humans are awake then I usually go to the Breakfast Nook. Little known fact - the Breakfast Nook use to be the 4th St. Bistro. I use to own that and sold it to Paul who owns the Nook. Hence I've been going to the Nook to eat since they were downtown in the little shack. If it's time to eat and it's after 2am I go to the 4th St. Pantry that just opened up last month. They are a little known place & that's why I like to go there, no running into the usual belligerent drunks like at Denny's and such.

2. Favorite place to grab a sandwich for lunch: The Big YELLOW roach coach sitting in the parking lot at Goodwill. Best Philly Cheesesteak in town and the curly fries stretch out so far that they put the corporate fries to shame. The Fry sauce is pretty darn yummy too, my little daughter loves it.

3. Best Mexican restaurant: Toro Veijo, of course. But it's true, I love their grub...

4. Best Chinese restaurant: If you find a good answer for this I'd love to know where to go. Both the places downtown are not bad, but I still think somethings missing.

5. Best place to get sushi: Troy @ Bonsai especially when he's been drinking...

7. Most frequented bar or nightclub: Tough question here, I usually go wherever they pay me the most. I usually work most of the nights that are worth going out on so I'm stuck to make it the best it can be wherever I may be. Currently either the Torch Lounge or Baja Bargarita.

8. Someone offers to buy you a drink. What do you order? Depends who's asking, I generally will always says Patron Platinum or Crown XR, no one other than the Resort has Louis Tre & it's not really all that good. However it's few and far between that someone actually buys me those drinks. I usually always seem to wind up with a 44/Red Bull!

9. If you were a flavor of ice cream, what flavor would you be and why? Half Baked-a crazy concoction of chocolate and vanilla ice cream mixed with fudge brownies and gobs of chocolate chip cookie dough...why? Why not, someones got to be!
Posted by Patrick Jacobs at 11:04 AM