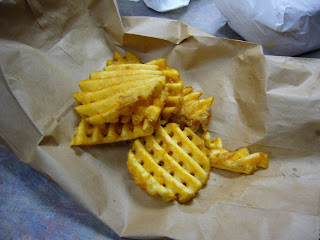 Is there anything in the world more traumatizing than when a restaurant stops serving one of your favorite items? Probably, but it still really bites. Apparently, Zips Drive-In on Sherman Ave. in Cd'A has mercilessly killed off one of their trademark items, something they've been serving since the dawn of time, something beloved by thousands of local residents both young and old: Criss Cut Fries.

I haven't been witness to the horror of this travesty myself, but a friend of mine told me last night that he had just been to Zips with the intention of ordering the same thing he's ordered for decades: two Papa Joes and a tub of Criss Cuts. The counters girl's reply was as cold and dry as an arctic tundra or Sarah Palin's ****: "Sorry, they've been discontinued".

My friend said the words made his heart pound, his head throb and his knees go weak. Discontinued. Dis.cont.in.ued. He said he felt like she might as well have told him "Sorry, your grandmother is discontinued", for the sense of loss and confusion was sudden and overwhelming. No more Zips Criss Cuts. Ever.

His appetite immediately disappeared, and as is normal with the grieving process, his sadness changed to anger as he turned on his heel and exited stage right, announcing haughtily "Well then, missy! I guess you just lost this customer for good!"

Personally, I would have probably just said "Then I guess it's gonna have to be tater tots for this bitch from now on" and lived with it, I still find the idea rather upsetting. I remember Mom surprising us with tubs of Criss Cuts from Zips when I was growing up, and there was something unique and magical about them, and plus, they could hold gobs of that Zips trademark tartar sauce like no other fried side in the world.

The question then is "Why?" Why would Zips kill one of their tastiest and most popular items? Is it the bad economy? Do we blame Obama for this one? (You know people will.) Are they simply considered gauche and out-of-style next to younger, sexier onion rings with their dark Hollywood tans? Were they just discontinued by the evil overlords that manufacture them? We the people want answers. The only other place to get them is Carl's Jr. and Carl's Jr. is fully disgusting, so that won't be happening anytime soon.

Perhaps it's time for the good residents of Coeur d'Alene to band together and rise up in support of the mighty Criss Cuty fry and demand that Zips bring it back immediately! Meanwhile, I hope you'll join my friend and I in boycotting the restaurant until they come to their senses and give the people back the glorious friend potato product they've come to adore and make part of their families. Well, you can join my friend at least. I can't possibly go any length of time without their awesome Halibut-n-Chips.
Posted by Patrick Jacobs at 10:04 AM

Interesting...last week we were at Fishmerman's Market and Grill and they served criss cut fries. They were WAY better than the slightly heavy, a-bit-too-brown fries offered before.

Bottom line, one dining establishment saw the light, while another has appeared to lose its bearings...

Cris cuts at Zip's. Ahhh, my wife Anavel loves them also -- slathered in ketchup. But with the new world and technology comes accurate numbers and I cringe at times as the numbers do not lie and items that I swear we sold plenty of in reality are pretty weak. At any rate I announced to her last May that with the significantly reduced sales of Cris Cuts that it was time to take them off the menu in downtown Cda'. Cris cuts seemed to be an item that had run it's course. Not hearing any comments all summer in regards to cris cuts I was excited to see this blog passed on to me and that there is interest in this item. With that in mind and also being one that likes to prove the numbers wrong I'll offer them up as a menu item starting next Tuesday (9-7) thru the end of October to see what transpires. As always we'll have to track the numbers to see what happens and if they are worth putting them back on as a permanent item. One thing is for certain my wife Anavel will be ordering them up! Hmmm, now if there was only the same interest in my beloved grilled 1/4 hot dog which I also pulled last May. I loved that dawg!