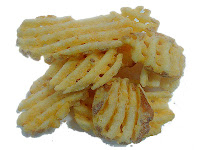 We're all about influencing positive changes here at Get Out North Idaho, and I'm not talking about weight loss hypnosis. I give you: the triumphant return of Zips' Cris Cuts to sunny downtown Coeur d'Alene. The following comment from the restaurant's owner came down the pipeline yesterday:

"Cris cuts at Zip's. Ahhh, my wife Anavel loves them also -- slathered in ketchup. But with the new world and technology comes accurate numbers and I cringe at times as the numbers do not lie and items that I swear we sold plenty of in reality are pretty weak. At any rate I announced to her last May that with the significantly reduced sales of Cris Cuts that it was time to take them off the menu in downtown Cda'. Cris cuts seemed to be an item that had run it's course. Not hearing any comments all summer in regards to cris cuts I was excited to see this blog passed on to me and that there is interest in this item. With that in mind and also being one that likes to prove the numbers wrong I'll offer them up as a menu item starting next Tuesday (9-7) thru the end of October to see what transpires. As always we'll have to track the numbers to see what happens and if they are worth putting them back on as a permanent item. One thing is for certain my wife Anavel will be ordering them up! Hmmm, now if there was only the same interest in my beloved grilled 1/4 hot dog which I also pulled last May. I loved that dawg! ~ Michael"

OK potato junkies, get down there and start ordering up those heaping tubs of polyunsaturated goodness with extra tartar and tell them we sent you.
Posted by Patrick Jacobs at 10:04 AM

Michael, could I pleas suggest the return of the original Wrangler? The one that is substituting it now does not even compare to the original. I come to Zips for 3 things. Original wrangler, criss-cut fries, and the to die for tarter. I'm glad to hear the temporary comeback to the fries, and with any luck, you will do the same with the Wrangler. Post something on your reader board..saying. you make the call..should they stay or go! So people know what's going on. Especially for those of us that do not solely live on fast food! Thanks Michael for your consideration. Chad T