Q & A with Simon Sez 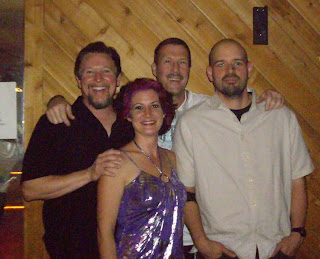 Cover bands are basically the bread and butter on our local live music platter, the kosher in the juicy dill pickle of the bar scene, the hot-melt in the glue gun that holds it all together. There are at least as many in the area as there venues for them to perform in, and probably every last tambourine player around knows who Gary Schultze is. As the head of booking agency Current Attractions, chances are he's the one who got them the gig in the first place.

When he's not locating nightclubs for other cover bands to play "Sweet Home Alabama" in (and they all do), Gary is just as well known as the man behind the drum kit in one of North Idaho's most popular classic rock/variety acts, Simon Sez. They create spontaneous outbursts of dancing somewhere or another within a 40-mile radius of Coeur d’Alene pretty much every weekend and always manage to whip up an enthusiastic crowd.

Recently, I cooked up a few questions to get to the bottom of the Simon Sez situation, and Schultze was kind enough to oblige us with answers.

Tell us a little about how and when Simon Sez got started?
Simon Sez was formed in November of 2006 by Mark Ireland (bass), who played in the Spokane band Vern And The Volcanoes in the late ‘90s and early 2000s. Mark’s wife Dolly (vocals) had joined the Volcanoes later in the life of the band and after they broke up, he found me on drums and vocals and Jack Lederle on lead guitar, a role that now belongs to Ben Rose.

What’s the origin of the name “Simon Sez”?
We just wanted a name that was easy to remember. There are some bands that when you read the name in the paper or on a flyer, it is hard to figure out the name of the band. Our catch phrase during our show is "Simon Sez, don't forget to tip your bartenders and servers.”

What’s the worst gig Simon Sez ever played?
We played at a bar called Bucks Roadhouse (the old Rainbow) on the east side of Hauser Lake in October 2007. It was a Friday night and there were two people in the audience. We did a set and a half and the owner, who is now in prison, closed the place down and the band went to Curley's.

What are some songs are we guaranteed to hear at a Simon Sez show?
“Born On The Bayou”, “Rebel Yell”, “Folsom Prison Blues”, “Poker Face”, “Bust A Move”, and of course we do standards like “Sweet Home Alabama” and “Brown Eyed Girl”. I am really trying to phase out “Mustang Sally” from our list, but people always dance to it.

Are there any songs people frequently request that you refuse to play?
We were playing at Chillers a few years ago, and this woman kept coming up to the stage and yelling out "Pretty Woman". We still haven't learned it as a band and I don't think we have any plans to. Usually, if we know it, we will play it. It is not about us, it is about the audience having a good time.

What are some of your musical influences?
As a band, our influences are whatever we think people will dance to on a regular basis. We are known for our varied list of songs and as being a fun band and we really try to sound like the original song.

Which other local bands do you admire and why?
There are so many great bands in this area, I don't think I could list them all. I really like The Cronkites and The Rub. The Cronkites have been playing here for so long and they are fun and have a great song list. The Rub doesn’t play a lot, but they are really a fun band too and do a great job relating to the crowd.

What’s the strangest venue Simon Sez has performed in?
Sweets Lounge in Wallace. It is not set up for live music. We set up in the corner, and in front of a closet. There was a door next where we set up that led to the Jameson Inn.

What did Simon Sez do before Simon Sez?
I played in a heavy metal band in Hollywood in the ‘80s called Child Saint . Dolly sang Patsy Cline songs on karaoke when she was 16 and played in Vern and The Volcanoes along with Mark. Ben went to the Guitar Institute of Technology in Hollywood and played in a local blues band, "Hoodoo Udu".