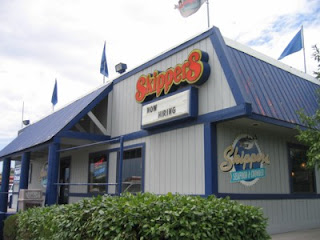 I’m just going to listen to the experts and pretend I ate a healthfully guilt-free lunch. Dietary experts say that regular consumption of the Omega-3 fatty acids found in many types of seafood can help do a number of wonderful things for your body’s well-being, from lowering cholesterol and blood pressure to acting as an anti-inflammatory and possibly helping to prevent cancer. They say Omega-3 can lift you out of a depression, slow down the onset of Alzheimers and can even make you a better samba dancer.

But as I sat at the Coeur d’Alene Skippers restaurant getting busy with a colossal basket greasy fried fish and fries, dressing-soaked dish of coleslaw, and bottomless bowl of rich clam chowder, I didn’t exactly feel like I was going to become Doctor’s Pet anytime soon.

It kind of seems like the act of breading and submerging the fish into a vat of fryer oil then slathering it with tartar sauce would most likely counteract any potential health benefits. Possibly the good and the bad just cancel each other out, but the addition of fries and chowder surely takes things all the way over the naughty line. Still, I can pretend, and with Skippers terrific $8.99 all-you-can-eat special, it’s quite worth the self delusion.

Founded in 1969 in Bellevue, Washington, the company rapidly grew into a national entity but after a series of flounced corporate takeovers caused a noticeable decline in product and service, Skippers Inc. filed Chapter 11 in 2007. Many stores were shuttered, including the Coeur d’Alene unit, located in the corner lot of Silver Lake Mall. 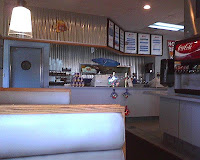 Flash forward several years, and like a soap opera character written back into the storyline, Skippers returned from the dead in dramatic fashion. Around the Northwest, dozens of restaurants have reopened, and with a newly concentrated focus on quality that includes serving only chemical-free, wild caught fish and the reintroduction of their original clam chowder recipe, they’re poised to once again claim the title of yummiest fast-seafood chain.

The Coeur d’Alene Skippers is bright and clean, with whimsical décor such a wooden sign advising “Don’t Be A Crab” and oddly, two clocks hung together, a working one with a “here” sign and one with a “there” sign that appears to be stuck, its second hand ticking but going nowhere (I have no idea what it means). A case stocked with bottled beer lets diners catch a buzz with their meals, and the condiment counter provides endless amounts of Skippers’ trademark tartar and cocktail sauces self-pumped into white paper cups.

In addition to the mainstay of golden-fried cod, Skippers’ menu includes plenty of other fruits of the sea to mingle with their thick-cut fries in yellow plastic baskets. Halibut, clam strips, prawns, shrimp, and chicken strips all occupy fryer space, as well as lobster bites and hushpuppies (fried balls of sweet cornmeal batter with onions and garlic), a rare-in-the-area Southern treat.

I happened to drop in on one of Skippers’ all-you-can-eat fish, chips and chowder days (Tuesdays and Sundays), a fact which the amiable counter guy let me in on as I stood in front of him struggling to decide. I had no intention of gorging myself too much, but after some quick math in my head, I realized the cost would be less than ordering a two-piece with side bowl of soup, so I decided to go for it. 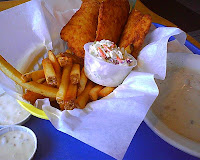 I found a window booth and immediately dove into my clam chowder. Fair warning: they serve it hot here, and the top layer of thin film that forms when the molten substance hits the air prevents any heat-indicative steam from rising. I nearly scorched my tongue on the first bite, but once I got past the temperature issue, its smooth creaminess and flavor burst of delicate ocean saltiness made it quite clear why Skippers has won multiple industry awards for the stuff.

My fish arrived blazingly fresh from the fryer, and after applying sufficient amounts of malt vinegar and tartar sauce, it took just a few nibbles to realize Skippers was fully back on top of their game. Perfectly flaky filets are held snugly together by a crisp golden-brown layer of batter to create little pockets of bliss, and although the four pieces I was served was more than sufficient to fill me up, they were so good I had to fight the urge to ask for more. The skin-on fries were terrific as well, and I learned something new; fries go great with cocktail sauce instead of ketchup.

As I finished the last bite, I could almost feel the Omega-3 fatty acids cleansing my arteries, making more space for the bad stuff to follow swiftly behind and clog them. Skippers’ fish might not be exactly what nutritionists had in mind when they decided eating lots of fish is good for you, but when it’s this addictively fantastic, who cares?
Posted by Patrick Jacobs at 1:00 AM

The place looks nice. I think I should pay this a visit. New place to hang out.

I want to bathe in Skippers chowder.... yummm

This place is so bad it's hard to believe they stay in business, but hey, this is Coeur d'Alene.
I won't go here even if it was free.

If you don't like Skippers, fine. But your posts seem to indicate more of an irrational hate of any place in North Idaho then actual objective comments. If the food here is so horrid, move. :P

This article is very great. I'm very glad to find this kind of site immediately. I like this very much. Thank you for sharing.