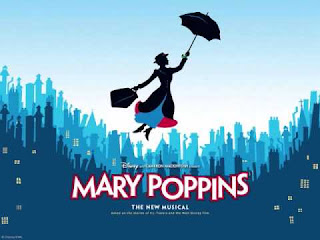 When the bacon cheeseburgers finally catch up to me and I fall onto my deathbed of chocolate cream pies, please throw a copy of Mary Poppins into my grave. I love the 1964 Julie Andrews and Dick Van Dyke film so very, very much. I remember riding my bike to the long-gone Wilma Theater in downtown CdA to watch it every time they showed a matinee (seems like it was at least 10 times a year) and by the time I bought my current DVD, I had worn out my VHS to a thin see-through ribbon of tape.

The film is as comforting to me as my mother's tuna casserole (the only thing she could cook decently) or a ratty old favorite blanket (mine is a Wonder Woman throw). It's something I put on the TV when life has me all blue and feeling all put out by the big bad world and another bottle of vodka is nowhere near my reach from my spot on the bathroom floor. Like "I Love Lucy" or "Bewitched", for me it's like Prozac in an audio-visual format.

CdA Summer Theater's production of Mary Poppins is based on the 2004 hit Broadway version of the P.L. Travers naughty nanny epic, and it differs slightly from the film. Gone are several of my favorite elements: the clucking ladies who grasp for the china and knick knack shelves every time the bell rings, and the tea party on the ceiling at Uncle Albert's. Also, Mrs. Banks is now an unfulfilled actress rather than a suffragette, and in the stage production, Mary takes the kids to visit the ancient Miss Corry's candy shop, something which didn't exist in the film. No matter, the musical performances, stage sets, lighting and magic special effects are so incredible you never even have the opportunity to stop and notice the differences at all.

While the entirety of this CdA Summer Theater musical was breathtaking, two particular songs stood out above the rest for me due to the sheer mindblowing spectacle of it all. "Supercalifragilisticexpialidocious" (which must be such a well-known word at this point that my autocorrect recognizes it) had the entire ensemble performing verbal acrobatics, spelling out all 28 letters of the word in round style, complete with arm movements to represent each letter in a way that was a heck of a lot more complex than "YMCA".

Even more delightful was the performance of "Step in Time", which had Bert leading his troupe of power dancing chimney sweeps through something akin to a mini version of "Stomp" with everyone beating out rhythms on the set and the stage with their boots and hands to a powerful effect. I could feel the thumps in my chest and I liked it. Spoiler alert: the truly memorable moment of this particular act was when, through the miracle of wires and pulleys, Bert took a dancey little stroll up the right wall of the stage, across the ceiling, and back down the left side without missing a beat. It was a stunt that would make even ol' Lionel Richie proud.

One thing that's always blown me away about Coeur d'Alene Summer Theater is how epically huge the voices are for such a small venue in a small town. The utterly astounding Mallory King was channeling Julie Andrews so well, she managed to actually out-Poppins the venerable Miss Andrews many times throughout the show. Everything from her proper accent and tone of voice to her exact-replica costume created the illusion that the 1964 screen version of Mary Poppins had come to life and landed (via umbrella of course) onto the stage before us.

Christian Duhamel as Bert may not have quite reached the same Dick Van Dyke heights of mischievous mirth and cockney grace, but he was only millimeters away from doing so, and his inventive and charming approach to the role and incredible shone through like a beacon of positive energy.

Young CST veterans Sophie Anderson (Jane Banks) and Tiger Ashtiani (Michael Banks) made a superb return to the stage. their singling voices are in fine form, but my ears had a bit of occasional trouble  understanding Anderson's chirpy dialog. Ellery Beggs Sandu as Mary Banks was like a gorgeous and delicate songbird, more so than the slightly brash Mrs. Bates in the original movie. Kirk Mouser handled the role of Mr. Banks with gusto, sometimes too much so, as his tendency to sing with overdramatic vibrato was a hair distracting at times. Still, the tenderness he brought to the role in the second half of the show won out and his acting performance was one of the most effective of the day.

I loved the witty British-flavored humor that was injected into the performance, especially from Krista Kubicek as the "holy terror" Miss Andrew, a nanny who replaces Mary Poppins when she disappears halfway through. Her "Brimstone and Treacle" is a riot, and her adorable nastiness and uptight witchy glamour got the most chuckles of the entire musical. Also notable was Kieron Cindric who portrayed silver-sprayed statue come to life Neleus. He was the highlight of a truly psychedelic trip though "Jolly Holiday" and his TinMan-esque affectations and fluttering flamboyance added that spoonful of sugary gayness that any good musical requires.

It's not something I find myself saying often about anything, but CdA Summer Theater's performance of Mary Poppins was virtually flawless. I detected not a single flawed line, missed cue, technical flaw, or bum note from either the performers or the incredible orchestra, which was conducted by the talented Stephen Dahlke.

Several times during the middle of the performance (most notably after the jaw-dropping "Step In Time"), the audience rose to their feet to deliver a standing ovation. I don't believe I've ever seen this happen in the middle (not the end, although that also happened) of a show and it was well-deserved indeed. Personally, I sat in the audience feeling utterly moved, with tears of joy welling up in my eyes through most of the show. You've only got five more chances to see this performance, and you owe it to yourself to do so. It's a magical moment you will remember the rest of your life.

Nice, thorough review, however with weird typos.
The name "Bates" is oddly used in place of the characters' name "Banks."

Thank you for taking the time to review this show!

Thanks! I was trying to get this written in a hurry and a few typos slipped into the mix out of my scrambled brain - I will get them fixed.