You'd be forgiven for thinking that every last possible freaky food-based reality show idea had already been used up, but SpikeTV recently debuted a new one which appears every Sunday evening at ten o'clock. It's called "Frankenfood" and it's billed like this:


America is hungry for the next great food sensation and superstar executive chef Josh Capon eats his way across the country to find the best “Frankenfood,” revolutionary creations that mix outrageous and unexpected ingredients in delicious and unique flavors.

The hosts travel from city to city and local home cooks and professional chefs compete to have their Bizzaro World creation featured on the menu of a local hot eatery. I am addicted to food-based reality shows like Joan Rivers is addicted to botox, and "Frankenfood" qualifies as one of my recent favorites.

So, I thought it would be a bit of fun to waste hours of my day away poring through webpage after webpage, closely examining local menus for culinary creations that are crazy collisions of flavor, the unexpected and unique, or things that we make you feel like how C& C Music Factory felt in 1990.

I'm sure there were others, but one genuine North Idaho frankenfood pioneer that comes to mind from a sadly long-gone establishment is Dangerous Dog's (CdA) #6, the P.B. Dog. This was a gag-inducing item for some, a beef hot dog smeared with Chunky Peanut Butter and honey, lined with sliced bananas and sprinkled with chopped peanuts. Jesi B had enough bazongas to order this the first time we went to the place. I had a bite, and the flavor combination was surprisingly divine! I highly recommend this for home consumption, especially if your little stoner cousin is in town visiting from Walla Walla.

The weird hot dog idea has recently been resurrected at Lavadog (180 W. Hayden Ave, Hayden), where you can get a 1/4 lb. all-beef frank topped with various combinations of these sorts of fruity mind-bending options: lemon garlic sauce, passion fruit mustard, banana relish, wasabi mustard, spicy lemon garlic sauce, coconut relish, you get the idea. Hawaiian hot dogs? I googled the concept and yes, there are similar style hot dog places scattered around the Hawaiian islands, apparently originating from American soldiers who first whipped out their wieners on the beaches of Hawaii during WWII. "Onolicious" is Lavadog's motto, and while I was hoping that was a reference to Yoko Ono's recipe for pickles, Google tells me it's simply Hawaiian slang for "totally frickin' tasty, dude!" 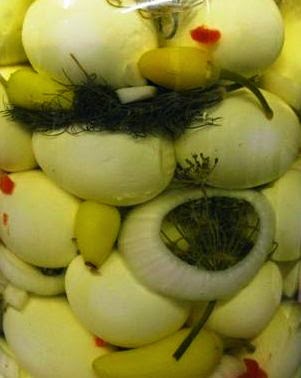 Personally, I'm not afraid of them because I love things that are soaked in briny vinegar water for days, months, and years, but for many people I know, the thought of eating a pickled egg is as frightening as seeing Lola Hagadone without her wig. And in these parts they're also as rare as a Lola Hagadone sighting, period.

Last year, I randomly found myself having an especially wild night involving, karaoke, my pal Q, and a big white cockatoo at the Kings Inn (43073 Riverview Dr, Kingston). The cockatoo belonged to the barmaid and this bird somehow decided we had the best shoulders to jump around on that he had seen in ages. We had pulled right up to the counter at the 120 year-old bar and eventually I noticed a big, weird jar filled with alien green fluid and mysterious white ova. Pickled eggs! I needed one. Wait, I needed two.

While the barmaid was fishing them out with giant tongs, she told me that they hadn't actually created a fully fresh brine since at some point during the Eisenhower administration. They just kept adding more hard boiled eggs, and occasionally a cup of vinegar and spices whenever the juice started to get a little low. I was served my eggs (50 cents each!) in a little boat with some pickled carrots, onions and peppers and they were gloriously raunchy, especially on the drive back home (Q couldn't roll down the windows far enough). 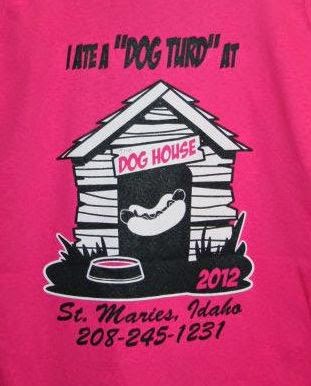 There's a famous scene, or should I say an infamous scene, at the end of John Waters cult classic 1972 film Pink Flamingos, where 300 lb. drag queen Divine bends over and pops in her mouth something very fresh that the doggie just dropped out of its south end onto the street, then gives the camera haunting s**t-eating grin and a wink.

To me, sometimes all you need to create a frankenfood is a weird or disgusting body part. Believe it or not, I was once a vegetarian for six years, and I am still quite squeamish about the meat I put in my mouth (don't go there, gurl). I stick with the boring basics.

A dumb stupid chicken clucks around the barnyard eating bits of rock, gravel, and who knows what, so baby Jesus had to give it a damn gizzard to break that stuff up so it could actually digest that crap without croaking to death. Then, at some point in time, a desperately hungry fool thought "Oh yes, that creepy sac looks delicious, let me deep fry it and chew and chew and chew that chewy thing and then swallow it!" I'm sorry, I just can't, but I know there are gizzard freaks reading this, and the only local place I could find for you to get your fix is the White Horse Saloon (6248 W Maine St, Spirit Lake) where they serve their gravel sacs with celery and ranch ($5.95) 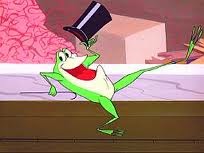 Anytime I hear about someone eating frogs legs, I think of the classic Looney Tunes cartoon starring the singing frog with a top hat and cane (real name Michigan J. Frog) who ends up stuck in the cornerstone of a building during construction and is re-discovered over 150 years later when the building is demolished. The image of poor Michigan as a wheelchair-bound paraplegic croaking "Hello ma baby hello ma honey hello ma ragtime gaaaal" would haunt me for the rest of my life, so again, I just can't.

"Tastes like chicken!" goes the cliche, but if I want chicken, I'll eat some damn chicken because chickens don't know how to sing old show tunes and dance. If the idea of slithering frogs legs down your gullet doesn't horrify/mystify you, you'll want to head to G.W. Hunters (615 N Spokane ST. Post Falls) for their Creek Bottom Frog Legs, "fried until crispy and served with a sweet mustard sauce ($12)".

Meltz Extreme Grilled Cheese (1735 W Kathleen Ave Suite 3, Coeur d'Alene) is well-known for coming up with concoctions that qualify as top of the heap in the frankenfood pantheon. In fact, the strip-mall giant won an award last year for a sandwich which fuses East, West, and acid flashbacks. Their Korean Krazy ($11.75 Full) was the 2013 National Grilled Cheese Invitational Winner and is made up of all this jazz: provolone cheese, pepper jack cheese, bulgogi BBQ beef, house made kim chi, crushed sesame sticks, scallions, hot pepper ketchup, cilantro and a cucumber-jalapeno dipper.

Also planned for this sandwich was grilled samgyeopsal, a tube of Aquafresh, three extra knobby beets, sprinkles of Margaret Cho's dandruff, the blood of a blind Siberian Wapiti, green maraschino cherries, a voodoo doll of Kim Jong Un, and lark's tongue in aspic, but they ultimately decided enough was enough. 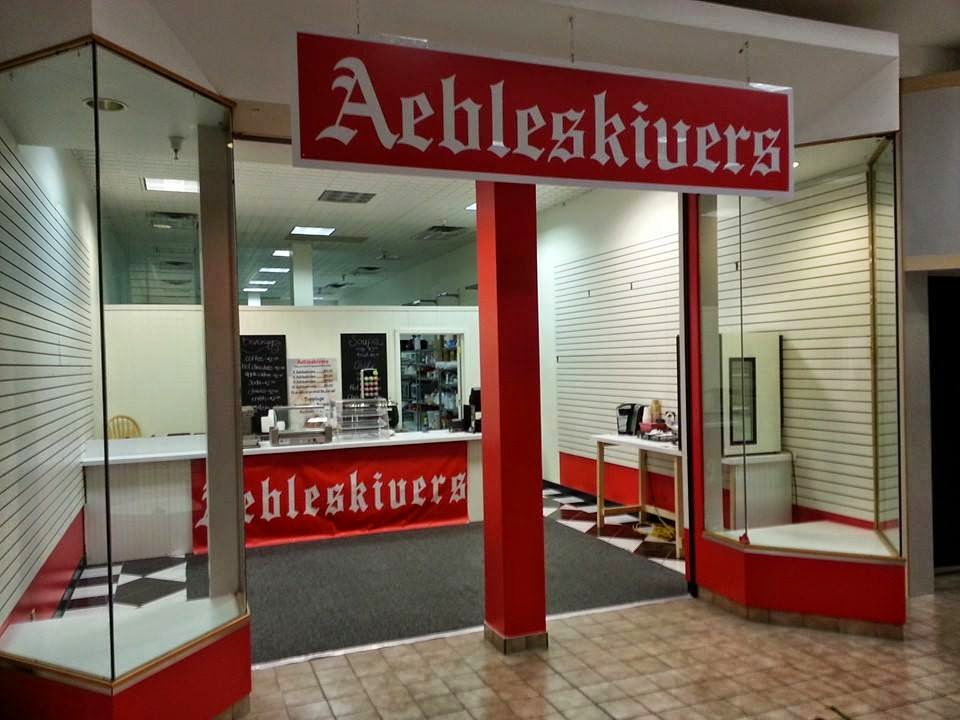 And finally, a frankenfood dessert. Or...not. When one thinks of aebleskivers, variously flavored round Dutch pancakes, one thinks of something sweet for breakfast or dessert, or every single minute of the day between breakfast and dessert and beyond (they are delicious!). Aebleskivers is the easy name of the shop in CdA's Silver Lake Mall and normally they served them sprinkled with cinnamon and sugar or berry compote or a sweet glaze of some kind. They have chocolate ones too! They're kind of donutty, really.

But those crazy kids up there thought: why not make a savory variety. for dinner or lunch or every single minute of the day between lunch and dinner and beyond? So Aebleskivers invented aebleskivers with Sausage and Havarti Cheese and that sounds like something I could chow down on whenever and wherever with whomever. Finally, a real reason to visit the cavernous, echoing empty mall other than riding the coin operated kiddie carousel after a fifth of Fireball. Hurrah!

Posted by Patrick Jacobs at 2:12 PM