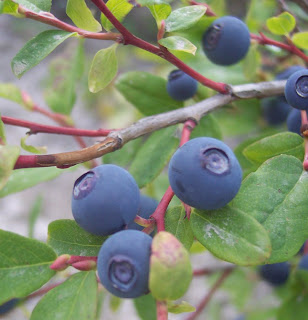 Pick a Peck of Huckleberries in the Panhandle

Visitors from out of town often ask me “Where can I buy an potato?” I tell them “Try Safeway” and politely explain that perhaps somewhere in the unspoken hinterlands of Central and , there may be plenty of potato farms, I don’t know. I’ve never seen one myself. Up here in the beautiful part of the state, I tell them, it’s all about the magical huckleberry. Many are surprised to learn that the huckleberry is actually the official state fruit, rather than the more obvious choice of Congressman Bill Sali.

I may risk getting blacklisted by the Idaho Potato Commission when I say that I hold our rare and deeply violaceous berry in much higher esteem than some lowly everyday tuber, offensively dirt-encrusted and starchy. No, the huckleberry is what makes a purple paradise every July and August. You can’t, in good conscience, call yourself a North Idahoan unless you have experienced the Zen of picking huckleberries.

You certainly don’t have to drive far to find a good picking spot, and they grow literally in every alpine area of the panhandle. Pack a picnic lunch and bring the family or make it a peaceful and meditative solo experience. Either way, it’s a great way to spend a day (or longer) hiking in the raw resplendence of the mountainous wilderness.

Avoid the heat by heading up to the mountains as early in the morning as you can. You’ll need to bring a container to gather your rotund little treasures in; anything from a grocery sack to Tupperware to a 5-gallon bucket will work. You might want to bring some light gloves so you don’t get scratches on your hands or ruin that $50 Resort Spa manicure. Long sleeves, long pants, socks and hiking boots are the best gear with which to avoid bloody legs while getting into the nitty gritty of a berry patch, and covering up also helps to prevent the agony of insect bites and poison ivy. The horse flies up there are huge translucent blue-green critters that visibly sneer at you as they bite into your flesh, and they certainly don’t know the meaning of the word “shoo”. Additionally, it’s a good idea to wear a cap for the avoidance of those nasty deer ticks; nothing ruins an appetite for huckleberry cheesecake faster than learning you’ve contracted Lyme disease. Other things you may want to bring include bottled water, sunscreen, bear spray, your iPod, and your laptop for live blogging the whole thing.

Be warned, many folks have their preferred huckleberry picking place, and they return to that spot year after year. Some people can be viciously territorial about their picking spot, as if they were the only people around to have discovered it and now it’s theirs and theirs only and of course it’s where the finest perfect berries grow and there’s no way in Athol they’re going to share their precious secret place with an amateur like you! Go find your own darn picking spot! In other words, I could tell you some very specific places to go, but I risk stepping on the toes of folks who might claim reservation of those particular bushes. 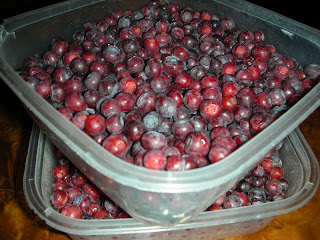 In reality, there are plenty of berries to go around – the bushes have a magical way of restocking themselves after encounters with greedy pickers. For longer, more camping-oriented huckleberry getaways, head north to and the Kanisku forest near Bonners Ferry. If you’re just in the mood for a small day trip and only require enough berries to throw in your pancakes on some lazy Sunday morning, I’d recommend heading up into the via either or near Wolf Lodge. From these roads you can access some of the many very bumpy Forest Service roads that will take you up to where the berries grow fierce. If you don’t see any yet, keep going up.

Huckleberries are a little shy: they only grow above a certain elevation and they might not be visible from the road, hiding in the shady safety of bushy leaves. Look for clearings in the thick trees. The best berry picking is usually found along abandoned logging roads, and in old burns. The berry bushes found in these areas have a lot of sunlight and little competition for nutrients and yield the plumpest, most purple fruit. As they say, the darker the berry, the sweeter the juice.

Whether you just picked enough berries to make a single tantalizing tart, or if you’ve managed to pack your freezer with a motherlode of the sweet little buggers, you’ll find plenty of ways to put your takings to good use. The dessert possibilities are almost endless; you can just substitute the huckleberry for almost any other type of berry in your recipe book. Make syrup and smother

Some local folks have made the berry their business, manufacturing and selling huckleberry filled chocolates, jams and jellies, even flavored popcorn. Perhaps the most ingenious and inspired concoction is “44 Degrees North”, an elegant huckleberry infused vodka which can be found as the main ingredient in “Huckletinis” and other unusual cocktails at certain fine dining establishments throughout the region.

If you really can’t get enough of the luscious purple fruit, there are several Huckleberry Festivals in the region, all happening on the weekend of August 17th and 18th. I wasn’t able to uncover much information about the Priest Lake Huckleberry Festival, other than the fact that it’s located on Highway 57, near milepost 27. Slightly further south, The Schweitzer Mountain Huckleberry Festival is Saturday only, with guided berry picking hikes starting at 9 a.m., a massive barbecue, live music and a “huckleberry themed village” with arts and crafts vendors. The event closes at

The biggest huckleparty appears to be in Wallace, whose annual Huckleberry/Heritage Festival runs the entire weekend and will feature a huckleberry pancake breakfast, vendors on the front lawn of the old depot, a “bake off”, and a 5k fun run, presumably to burn off the calories from all those huckleberry treats. The Wallace Chamber website states that “Huckleberry Sheriff and Huckleberry Hound will reign during this exciting two-day event that features activities for the whole family.” So don’t even think about committing any huckleberry crimes or you may find yourself in huckleberry jail.

Another sugestion I would make is not to park in the middle of the road! Remember you are not the only one using said road so leave room for others to get by.
12:11 PM

We just spent the afternoon picking huckleberries around Kellogg. We were over there anyway, so figured why not. Ended up with about a gallon.

One thing you don't want to see while picking huckleberries is fresh bear poop. That certainly made me nervous!
8:57 PM

I love huckleberry pie!! so please post a recipe with this incredible fruit and make me happy !

Huckleberry is deliscuous! I like to prepare different desserts using it, however sometimes is very difficult to get it at market.

Try huckleberry barbecue sauce too. Make your own. Simply make a huckleberry puree by adding a little water to some huckleberries and cook them until they turn liquid (15 minutes?). Then add your favorite barbecue sauce and sweeten, if you think it needs sweetening, to your own taste.

I use a 1 to 1 ratio of huckleberry puree to barbecue sauce -- gives a very huckleberry flavor.

Then pour it on pork or beef ribs, roast chicken, or roast duck. Out of this world.

I barbecue beef ribs on a gas barbecue grill, then put them in the oven, covered tight with aluminum foil so they steam cook, for at least 1 1/2 hours at 330 degrees. When they come out, the meat is moist and falls off the bone. If I'm lazy, I buy a roasted chicken from Costco and give it the same treatment -- 1 1/2 hours at 330 degrees. The extra cooking gives it an unbelievable flavor and the chicken falls apart but is very moist.

Interesting post and thanks for sharing. Some things in here I have not thought about before.Thanks for making such a cool post which is really very well written.will be referring a lot of friends about this.

It is almost that time of year again. Only a few months away. With things getting green hear in CdA, I am itching to get out and look for a new location for picking this year. If anyone has any recipes or stories they would like to share about huckleberries, we would love to feature them on huckleberrybasket.com

I love your huckleberry photo at the top of the page. Would you let me use it in a book about state symbols I'm working on (Geobop's State Symbols)? The huckleberry is one of Idaho's state symbols.

You can learn more about my book at www.kpowbooks.com.