The holidays are fully nigh, and whether you throw down for Christmas, Kwanzaa, or Festivus for the rest of us, more than likely you'll be doing some gift shopping. Here's a few suggestions with a local flavor: 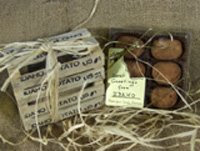 1. Hermine's Marzipan Potatoes website
A dear old friend recently turned me on to these wonderful little old school European nuggets of joy recently. Hermine Sittel-Kubista has been quietly concocting her "Old World Confections" from the back of her clothing repair shop in a strip mall on Gov't Way for years. In fact, she's had so much success with her homemade sweets recently, the tailoring has become the back room job, and the candy has moved out front, complete with a small sitting area for patrons who choose to sin with her decadent luscious truffles and Lebkuchen. One of her most popular items is a small wooden crate filled with cocoa-powder dusted mini-potato shaped bites of pure marzipan, a rich, delicate, melt-in-your mouth candy made of almond paste. Sehr gut, ja! 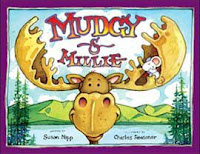 2. "Mudgy and Millie" book by Susan Nipp website
This Moose-Mouse combo are the coolest Cd'A children's book characters since...aren't they're the only Cd'A children's book characters? At least they're the only ones to have not only a series of awesome sculptures around downtown Cd'A to climb atop and pose nude on in the middle of the night, but they also have their own cool theme song. It's repetitive and catchy ("Mudgy and Millie all around the town...Mudgy and Millie all around the town") and can be downloaded as an MP3 from their website. Can a syndicated animated series be far behind? 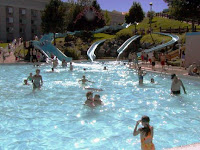 3. Wild Waters Season Passes website
Silverwood Theme Park might be a national draw these days, and its Boulder Beach waterpark is pretty darned cool, I admit. But when I was ten, the opening of Wild Waters was a life-changing phenomenon, and my season pass was used daily, all summer long. Hours were spent in the video arcade or eating gloppy cheese nachos or riding innertubes down the bright-blue tiered falls as slowly as possible or standing under the giant water faucet or waiting in line forever getting five alarm sunburns or sprawling out on the grass and listening to Prince's "Little Red Corvette" on KZZU or losing swimtrunks in a sudden rush of water midway down a long waterslide trip. I haven't been in many years and it may be somewhat ghetto now for all I know, but I'd still suggest that you get your favorite adolescent a an endless summer pass for only 90 bucks and maybe they'll end up with fond memories of their own. 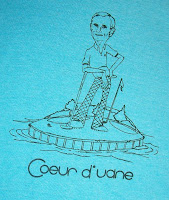 4. "Coeur d'uane" T-Shirt website
You'll have to really, REALLY hunt for one of these very limited edition retro gems. I stumbled upon mine at St. Vinnies Thrift Store years ago and I'm not planning on selling (wait, name a price), but I seem to recall that Huckleberries Online blog boss Dave Oliveria might have some of these stashed away somewhere in the depths of his massive secret collection of Hagadone bric-a-brac. Maybe he'd be willing to trade it for some framed photos of three-headed animals. The back features another portrayal of the big H along with Jerry Jager, throwing a tantrum and yelling "Mine! Mine! Mine!" Who made these anyway and why?

5. Quicksilver Photography Makeover Portrait website
The CDA Press ad for Quicksilver's $39 makeover portrait special claims that it will be "the best portrait of yourself you've ever seen or it's free." I'd love to see some of the rejected photos that have caused them to tear up invoices over the years, they must be shockingly awful. The ladies in these ads usually look better to me in the before shot, more natural and at ease. The makeover always causes the victim to look harsh and majorly 80's - big hair, pouty ho lips, soft focus glow. Still, this is a fun gift for that Plain Jane on your list who never wears makeup and would look totally ridiculous in Joan Collins drag. Hopefully she has a sense of humor and is willing to put herself at the mercy of the Quicksilver Makeover team. 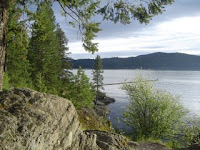 6. "The Treasure Called Tubbs Hill" book by Scott Reed website
Who knew there was so much to it? This book is filled with every little detail anyone could ever possibly need to know about Coeur d'Alene's gorgeous crown jewel. Whether you've only ever observed this pristine urban natural landmark from afar or if you spent your childhood exploring every nook and cranny, trail and cave (like myself), you'll find this tiny but intense paperback fascinating. It's remarkable that both commercial and residential development threatened to encroach on Tubbs Hill so many times over the last 120 years and that residents have always had the foresight to reject such advances and keep it exactly how it was 120 years ago and 120 zillion years ago. The Cd'A library sells copies autographed by Reed, so put a copy in everyone's stocking. 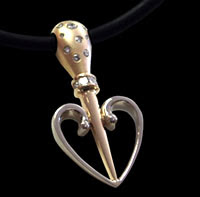 7. "Heat of the Awl" pendant by Cheryl Burchell website
I'm pretty sure Coeur d'Alene never had an official handcrafted jewelry item until Cheryl Burchell designed her "Heart Like An Awl" pendant, unless you count those kind of necklaces made from beer tabs and gum wrappers. Burchell's gorgeous design was inspired by the legend of how our town got it's name, described on her site as follows: "Coeur d'Alene is a French name that was given to the Schee-Schu-Umsh Indians of northern Idaho during the early fur trading days. The name Coeur d'Alene may have been an attempt by the Iroquios guides to describe the sharp trading practices of the Schee-Schu-Umsh. They were known to have hearts (coeur) as sharp as the point of an awl (alene), a sharp hand tool used to punch holes in leather for sewing. Thus the name "Coeur d'Alene." These babies won't majorly pierce your wallet either, starting at $29.95 for a small pendant. 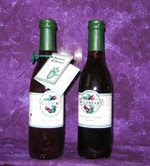 8. Wildbeary Huckleberry Drink Mixer website
"Our huckleberry mixer is versatile and can be used in many different ways. Use in your favorite daiquiri or margarita, in slushies and smoothies. Special fruit desserts are made easy with our mixer. Huckleberry Lemonade Concentrate: Tart and tangy, this is a winning combination of fresh huckleberry juice and lemon juice. We make the concentrate, and all you do is add two parts water to 1 part of our concentrate! Try this over ice, as a cool and refreshing summer drink: add to sparkling wine or champagne for a wonderful punch or “sparkler” for special occasions. Or, add it to apple cider along with cinnamon and cloves for a very tummy warming winter drink!" Make an impression by bringing a bottle to the Christmas party. This stuff sounds like it'd be delish mixed with equal parts Vanilla Rum and Sprite for a nice buzz with local flair. 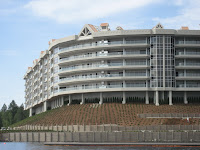 9. $5.5 Million Condo Unit at "The Terraces" website
The website selling homes in this Bose Radio look-alike Hagadone eyesore features photos of a private jet, a gaggle of artsy yuppie gals hanging on the sidewalk in front of Brix, and local stars Ellen Travolta and Jack Bannon performing together onstage. I love this glossy, semi-glamorous image of our town, so oblivious to the crusty ghetto that lies merely blocks away from this monstrosity on the east side of town. I've heard names from Oprah to Paris Hilton tossed around as potential parties interested in units. I've also heard conflicting stories saying that the terraces are either already all sold out or that they can't manage to find any interest and so it sits empty. Even though I think they're fugly, I doubt I'd complain if Santa happened to stuff my stocking with the keys to one of these places, just for the priceless lake views alone.

10. Professional Firefighters of Idaho 2009 Calendar website
Who doesn't love smiling shirtless firemen? What a matchless gift for your kooky, spicy aunt (or funny uncle); they'll love gazing at these hot fire fighters every day, all year round. Coeur d'Alene's own Luke Pichette is Mr. December and as the CDA Press so suggestively describes it, "sports an easy-going, boy-next-door insouciance hauling fire hose." Actually, that entire article was written in a way that suggests writer Alecia Warren had to excuse herself to do the she-bop in the bathroom afterwards. These calendars are a bargain for 15 dollars and the proceeds go to keep our young, brawny Idaho firemen fit and healthy for another year so they can be nice and buff for the Professional Firefighters of Idaho 2010 Calendar.
Posted by OrangeTV at 8:38 PM

Oh my gawd.. I totally want a hot firemen of Idaho calender.. that reminds me of a song I heard once... any ideas??

That pic is deceiving. Who ever that is it isn't Luke Pichette! I wouldn't waste my money.

Selecting one gift for dear ones is very tough for me. i always get confused. Thanks for sharing your last minute gift ideas. i like gift certificate gift ideas.

Wild Waters Season Passes is without doubts the best option for a gift, however the idea is a little bit expensive.