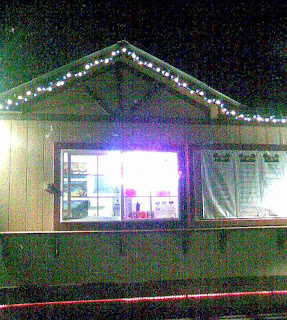 I sat shivering on a large rock in front of the Teriyaki Tiki hut, my posterior frozen to the rock’s frosty surface, the seat of my pants stuck like cheap Velcro. I was considering the irony of a sunny little Hawaiian hut serving summery BBQ take-away in the midst of a very wintery Idaho cold snap when suddenly another customer came roaring into the scene. She stepped out of her SUV like some kind of backwoods celebutant, tossed her gorgeous mane of brunette curls to and fro, stepped up to the window and from underneath a pair of huge sunglasses ordered simply “Kalua Pork. Two orders please.”

I watched as she received her change and did something remarkable and amazing, something I hadn’t thought of for some stupid reason. She got back inside her nice warm, comfortable vehicle to wait for her order, lit a cigarette and turned up the radio. It was Pat Benatar singing “Love is a Battlefield.” She exhaled a drag and glared at me for a few moments as if to say “Why are you sitting outside on an icy rock freezing your tucas off when your car is right there, you silly loon.” Maybe the island Tiki vibe had done a trick on my subconscious and I forgot it was only ten degrees out.

I stood up, slowly as to not to tear an ice hole in the seat of my jeans, and sheepishly climbed inside my car to wait out my teriyaki fix. I scanned the radio dial until I heard that voice warbling those immortal words, “We are young /Heartache to heartache we stand/No promises, no demands. “ I found myself singing along and looked over at my neighbor, hoping to catch her singing along too, to have some kind of Benatar moment together, but alas she had turned her attention to her phone and was yammering away obliviously.

Ever-smiling Teriyaki Tiki owner/chef Aggie appeared at the window of the hut and waved me up. It was so cold out she slid open the window only long enough to giggle “Here you go, thank you, bye-bye!” and handed over a white plastic bag holding a steaming Styrofoam box containing a meal sent from Heaven and worth its weight in gold. 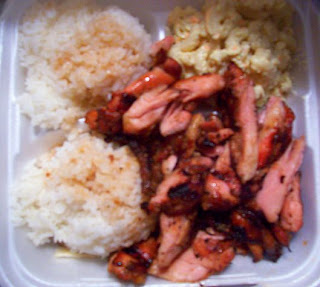 I became enamored with Hawaiian food several years ago when I stumbled upon the Sunset Grill, a small café her and her family were running up in the Sunset Mall on US95. I was instantly impressed, eating there twice that week, but when I returned awhile later, the place was as empty as a coconut shell. I mourned its passing for weeks, cursing myself that I hadn’t worked harder to turn everyone I knew on to their exquisite fare to help them stay open.

I had a run-in with Aggie earlier this year while out on the town, and being that I was a few pints deep into the night at the time, probably scared her with my over-excited reaction when she told me the news; She was firing up the grill again, this time as a drive-up hut on the far edge of her backyard, right in the alley behind the Corner Bar on 4th St. in Midtown. The location is unusual, but easily accessible, especially if you happen to already be at the Corner Bar.

Hawaiian cooking is a cross-cultural mish-mash, simultaneously encompassing elements of Japanese, American, Polynesian, Korean and Portuguese traditions. It’s hearty, highly caloric cuisine that no-one will ever possibly mistake for a Nutri-System meal. Teriyaki Tiki presents diners with a unique, authentic menu, serving up Hawaiian fare the way it’s truly done back on the streets and beaches of our gorgeous 50th State. Plate Lunches are common on the islands, always with two scoops of steamed white rice, a scoop of sweet macaroni-potato salad, and the entrée.

Main dish options include Teriyaki Chicken, Teriyaki Beef or Teriyaki Pork; Korean-style Kalbi Ribs; Chicken Katsu, which is deep-fried tempura-style and served with a tangy dipping sauce; a Hamburger patty smothered in grilled onions and brown gravy; or Kalua Pork, a dish traditionally steamed in the earth under glowing volcanic rocks. Portion sizes are surreal, and one plate lunch has been known to feed a family of three Mushroom Trolls for five days.

For some reason, Hawaii consumes more Spam than any other state in the nation, and one of the mo 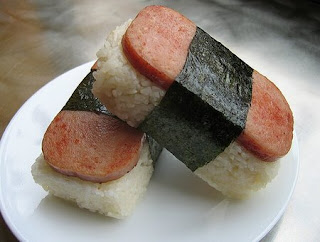 re popular preparations is Spam Musubi, which is a slice of sweet and salty marinated Spam atop a cake of white rice and held together with a thick strip of nori. In other words, Spam sushi. Teriyaki Tiki has it listed as an appetizer, along with Saimin, a ramen-like soup in fish broth topped with Teriyaki Beef.

Loco Moco is another popular obesity-causer consisting of a massive beef patty with fried eggs on top and covered with gravy, all served atop a bowl of sticky rice. Room for dessert? Try Haupia, which is a sugary coconut gelatin/pudding thing often found at better luaus, or maybe Pineapple with Li Hing Mui, a salty dried plum with a cult following.

By the time I finally arrived at my dining room table with my precious cargo, I was ravenous. Both cats instantly began circling around underneath me, picking up on the presence of chicken like sharks sensing blood in the water. “Beat it!” I kicked, trying in vain to chase them away as I dove in. At the risk of sounding obscene, I must say such sweet and tender thighs I have never known. The barbecued flavors ran deep through the marinated teriyaki meat and it’s braised to a perfect texture; juicy and moist and enhanced occasional bits of crunchy, blackened skin. White rice is white rice, but the main dish wouldn’t seem right without its balancing presence, and the scoop of fresh-made macaroni-potato salad is a wonderfully one-of-a-kind thing, bright in flavor and heavily addictive.

The cats were now staring fixedly at me from atop the television set, fidgeting hungrily as I enjoyed every chickeny bite. I started to feel a twinge of guilt so I gave in, deciding that Terikaki Tiki was too good not to share, even with a couple of very spoiled kitties.
Posted by OrangeTV at 12:01 AM

Any article or post that has Miss Benatar in it is clearly an outstanding piece of writing.. I hope somewhere in that cold wintery Idaho night my little blonde head appeared in your thoughts while Benatar played.

Great review, good warm-up food. Would want to go there if I wasn't here...Aloha....

I can't believe the Teriyaki Tiki has been shut down! Please, Please do what you can to get it open again. Rumer has it the the City closed them down because they have no sidewalk between the house and the "Hut" I guess the other violation was there is no bathroom for it's employees even though the employees live in the house!

It looks like they have reopened..yay!! I saw a huge "now open" sign on the garage next door and there are tables and umbrellas in front of the stand now.

Great set-up, I love how they had created there menu on the window's and they are so creative with the large rocks and tables outside of the Teriyaki Tiki.... Totally Hawaiian style. They prepare there food with love and aloha, most definitely. Love it....Mel Camero Carter. Maybe she should start selling her noodles. It's so ono.... special order only?! Love you Aggy & Mick "may he RIP"

Aggie is moving back to Hawaii in July or August. Better get your Tiki fixes before then. *sigh*

according to some friend that was in this place, the food is simply incredible, specially the meat is a speciality in this restaurant.

One of the reasons why I like visiting your blog so much is because it has become a daily reference I can use in order to learn new nice stuff. It's like a curiosities box that surprises you over and over again.

one question, what kind of food is the one that appear in the last picutere? looks familiar to me, but this is because I see a lot of anime.