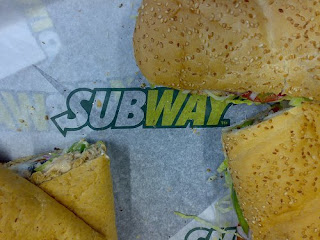 
I felt a slight twinge of betrayal when I discovered the amount of calories lurking in a Subway tuna sandwich. I thought I was being so good, so healthful. So proud of myself for sticking to my diet plan, even sacrificing yummy Monterey Cheddar bread for a sensible 9-Grain Wheat and opting for light mayo. Anyway, I’d always thought of tuna as weight-loss-in-a-can, touted by obsessive bodybuilders as a protein-rich miracle food that can help achieve maximum muscle hypertrophy and give you that fetching Lou Ferrigno glow. At least it felt like a step in the right direction away from the Baconator blues.

Au contraire, for my research reveals that a juicy Wendy’s Baconator burger weighs in lightly at a mere 830 calories, with 51 grams of fat. A foot-long Subway tuna with cheese and all the fixings and extra banana peppers waddles in at 1060 calories, with a fat count of 62 grams. 62 grams of fat sounds like

a heck of a lot to me, especially when I think of it in raw form, jiggling away like flan on a silver tray in the liposuctionist’s office.

Alas, for there’s something especially divine and lustful about Subway tuna salad. They swear there’s no secret ingredient, no magic way, just ordinary chunk light tuna and mayo. Maybe they use a particularly fine vintage of fish or maybe it’s the long hours spent in the chill of the walk-in cooler before it finally hits the ice-cream scoop on its way to sandwich glory. Whatever it is, there’s something naggingly addictive about it and it was a guilt-free pleasure, or so I’d once thought.

The Subway Corporation have been promoting their sandwiches as some kind of weight-loss trick at least since 2000 when “Subway Guy” Jared Fogle waved his great big pair of pants around on TV after allegedly losing hundreds of pounds by stuffing his face twice daily with turkey subs and walking around a lot. His fame as a company mascot inexplicably endures to this day, lingering like a case of onion breath.

I used to think it was pretty funny when I’d hear someone refer to Subway sandwiches as health food. When I was younger,

a trip to Subway used to mean one thing and one thing only: fatty Meatball Marinara subs with extra cheese. Tangy, hearty and messy, these delicious gut bombs were once my favorite thing on Earth, but at some point I got burnt out and switched over to the Spicy Italian on Parmesan bread. Both options out-scored even my beloved tuna in the weight watch wars. The sassy Sweet Onion Chicken Teriyaki sub is surely the bulging Queen of Subway Overindulgence at 1500 hot, glistening calories. Shoot, might as well throw in a bag of Jalapeno Cheetos and an extra large Dr.Pepper. Oh, and yeah, some of those excellent fresh-baked white chocolate macadamia nut cookies and…

“Next!” The teenaged “sandwich artist” snapped me out of fantasy mode as I stood at the counter of the brand spanking new Subway outlet on the corner of 4th and Best in Coeur d’Alene. “Six-inch Veggie Delite on wheat with just a little mayonnaise, hold the cheese and pickles and add lettuce, cucumbers, olives, onions, tomatoes and extra banana peppers please,” I sighed with slight defeat. Admittedly, this 230 calorie, 3 fat-gram sandwich is quite satisfying, very kind to the waistline and fairly tasty, at least for something with no meat or frosting. I decided to eat in, so I could check out the new digs for a few minutes. I pulled up to one of the shiny new faux-oak tables and unwrapped my plain vegetable sub. I chewed slowly, staring dreamily out the window at Davis Donuts across the street as I ate. 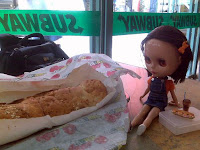 It had been quite a few years since I felt comfortable dining in this Subway’s former location down the street. With so many newer Subways having popped up in the area in the last ten or so years, the original 4th and Hattie location was referred to by many as the “Ghetto Subway.” In other words, it was truly time for an upgrade. I noticed the classic “vintage transit map’ wallpaper motif has returned in a slightly modernized form, and the new-look Subway has a much more relaxed atmosphere, the subdued earth tones much easier on the eyes and soul than the over lit, screaming yellow store of yesteryear.

Since the first franchise opened in Connecticut in the mid 60’s, Subway restaurants have become nearly as ubiquitous around the world as houses of worship or Verizon phone stores. A town knows it has finally earned its bold font on the map when Subway shows up and slides that first Cold Cut Combo into production. Unlike other fast food chains, Subway does not change its line-up according to local custom or culture; in fact the menu is invariably the same in each of the 30,476 franchised units in 87 countries that are known to exist as of January 2009. 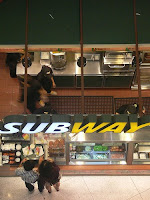 The store right down the street in your hometown is identical to the one in Zagreb, Croatia. If you suddenly happen to find yourself in one of the 30 Subway outlets in sunny Iraq, you won’t find Sabich, Baba Ghanoush, or Weapons of Mass Destruction. However, you will find a foot long Turkey and Ham on Honey Oat bread. Have a chance rendezvous with a stranger at a Subway in Shizuoka, Japan and you’ll find yourself ordering a Subway Club rather than sushi or soba noodles, although delightfully, they do serve Sapporo and sake. Of course, drinking is such a popular pastime in Japan that they even serve booze in cute vending machines right on the street.

I’ve been to Subways in dozens of towns, and I’ve had varying degrees of luck with service and general cleanliness, but I will say that overall I’ve always remained impressed with the freshness of ingredients and the consistent quality of product. In Rathdrum or in Romania, a Subway is a Subway, surprises are very few. There’s something oddly comforting in that fact, the notion that no matter where fate may lead me, I’ll always know that Tuna Heaven is just around the corner.
Posted by OrangeTV at 10:28 AM

Oh, the irony! I just started weight watchers and was forced to look at the nutritional content of my beloved Subway Tuna Salad.

Um....no more tuna salad from Subway! It can never taste as good knowing it has 26 grams of fat. :(