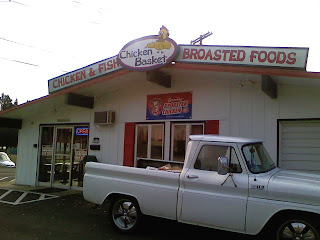 (Update: I've been told that sadly, on November 11 The Chicken Basket closed for good due to hard economic times. Also, I'm pretty sure that building is cursed.)

This most recent election season in Coeur d’Alene seemed to bring out a lot of passion in supporters of both the incumbents and challengers in the race for mayor and city council. While I admire those who choose get involved in such a crazy kind of circus, I find it somewhat odd that a restaurant would choose to forgo neutrality and boldly display signs in support of their preferred candidates. I would tend to think that by doing so, they run the risk of alienating certain customers who don’t share the love for the particular office-seekers they’ve chosen to advertise.

On a recent visit to the Chicken Basket on Northwest Boulevard in Coeur d’Alene, I was immediately greeted by several large placards endorsing a particular mayoral hopeful. They were scattered around the property and several were taped at eye level to the front door. Inside, there were candidates’ flyers posted here and there and even an official election ballot hung on the wall with the owner’s selections penciled in. Certainly there was no ambiguity about where the Chicken Basket stood in the impending municipal election.

Oh, well. Such an intensely appetizing aroma hit the hunger center of my brain when I walked in, all other thoughts evaporated right away. Really, the only politically oriented thought I could muster was “Vote for tender, juicy broasted chicken!” The Chicken Basket is the only local eatery licensed to serve the fine foods of The Broaster Company, a Wisconsin-based outfit who developed, according to their website, “a revolutionary method of preparing chicken, meats, and fish by combining pressure cooking and deep frying concepts”.

In exchange for the glory and glamour associated with the internationally renowned Broaster name, they agree to adhere to the use of certain equipment, methods and recipes developed by the company. Useless bit of trivia: as a teen, a pigtailed, smiling Daryl Hannah starred in a Broaster print advertisement. Clearly, this career-defining gig helped set the “Splash” actress on the fast track to fame and fortune. 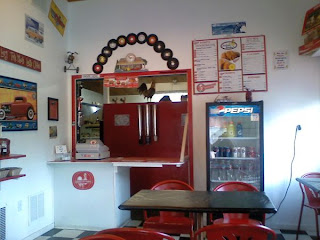 The atmosphere in the tiny former railroad depot that houses the Chicken Basket is festive and inviting with cheery red walls and black and white checkered floors. The décor brings together an interesting mix of choo-choo trains, shabby-chic chickens and the golden age of rock and roll. I approached the counter and began taking in the wall menu. The treatment of the various chicken parts served here was both malicious and delicious. Breasts, legs, wings, thighs, even gizzards are subjected to the cruelty of the broaster, and far be it from me to cast judgment on the situation. For those who prefer to avoid the savagery of eating their fowl directly off the bone, they also offer up chicken strips and chicken sandwiches.

Other realms of the animal kingdom are not safe from harm either; pulled pork sandwiches and Dutch Harbor cod also make appearances on the Chicken Basket hit list. Everything comes with French fries, coleslaw and a roll, and big buckets of up to 22 golden chicken pieces are available for those looking for something to delight the guests at their next post-election or animal rights party. 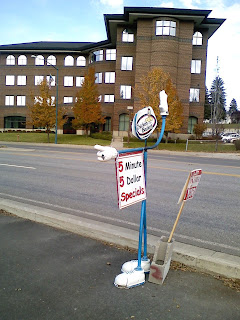 I opted for the Chicken Strips Basket and the friendly gentleman behind the counter, who I’m guessing was the owner, told me that it would take a couple of minutes for my meal to reach
perfection and was nice enough to offer me a free soda while I waited. It wasn’t too long, maybe eight minutes before he reappeared behind the counter with my lunch, and it was well worth every moment.

The broasting process had left the lightly peppered breading delectably crisp and the meat inside succulent and steamy. I know there’s no room for a chicken coop anywhere in or around the place, but these two monstrous slabs of white meat tasted like they were rendered from a bird that clucked its final cluck only moments ago. The meaty fries were among the lengthiest I’ve ever seen and the creamy coleslaw had a flavorful snap that impressed even this non-fan of coleslaw. Plopped on top was an old fashioned roll, the kind which are rarely encountered these days, but were once served with every meal everywhere. As if that wasn’t enough southern-fried calories to deal with, the roll came with a gold-foil wrapped pat of real butter. Hello, calling Paula Deen.

Personally, my growling tummy is guaranteed to overrule any concerns about political posturing. If a restaurant such as the Chicken Basket serves good enough food and the service is pleasant, they could hang signs espousing the evils of kittens and unicorns and I probably wouldn’t care.

was this a positive or a negative review?