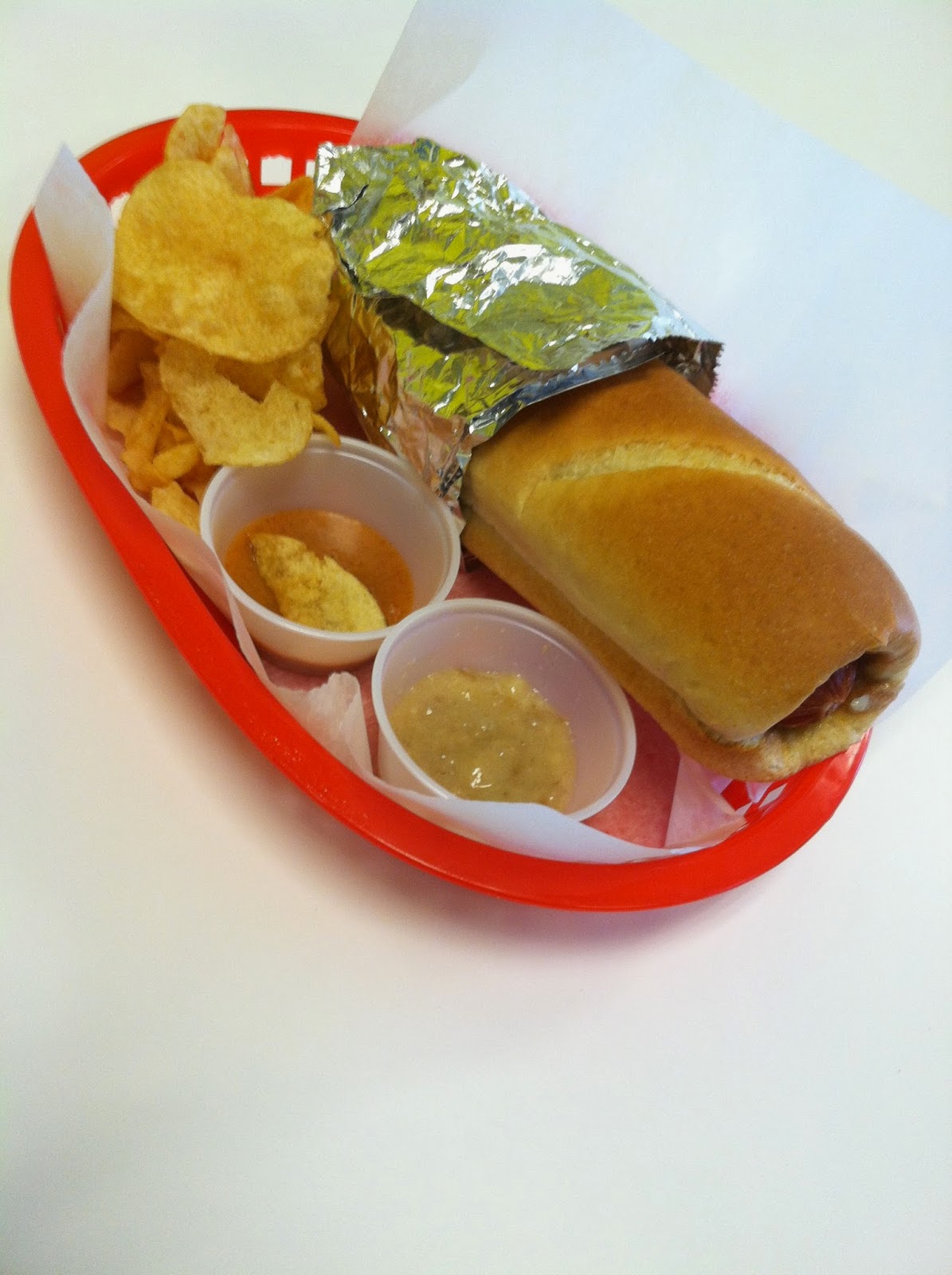 
Hmm, how ever shall I dress up my wiener? Ketchup? As blah and boring as a beige basement. Mustard? Dull as dust. Sweet pickle relish? Even Grandma thinks that old fashioned stuff is played out. What can be done about this yawn-inducing condiment crisis? Hayden's Lavadog Hawaiian Hot Dog restaurant has come to the rescue, with a battalion of unique, unusual, and just plain odd mustards, sauces, and relishes.

Lavadog had their signs up and Facebook page all ready to go about a year before they actually opened for business, so there was a lot of wonder and anticipation leading up to it. It's not actually that easy to get a gourmet or unusual hot dog in our neck of the woods, and with the much beloved Dangerous Dogs shuttering suddenly a few years back, people were ready to wrap their mouths around some serious surreal sausage.

Downtowners know about white-haired Bernie and his Bernie Dogs at his cart behind the Iron Horse, but his presence there is unpredictable, and Sonic's "gourmet" dogs look a lot better in the ads than they hot mess they are in real life. We love Gittel's Grocery 3 for $1.69 dogs, but with only plain ketchup and mustard as condiment options, they are the exact opposite of gourmet.

So when Lavadog finally announced their opening, the excitement among local hot doggers was palpable. Do they live up to the hype? Well, yes and no. One recent afternoon, I met my friend Gary there, in the little building on the east side of the Super 1 parking lot in Hayden, for a spontaneous lunch date. I walked in and my first impression was "OH THE YELLOWNESS!"

The walls are an almost disturbingly bright canary yellow, but the scenic photos of Hawaiian palm trees and sandy beaches do temper the effect slightly. The nouveau retro plastic chairs and linoleum tabletops come off as more cold classroom than beachy lounge. Overall, the decor is quite minimal and the place feels a little cavernous, more function than fab.

So Gary and I adjusted our eyes to the shock of the yellow and saddled up to the counter to place our orders. One of the best things about Lavadogs is the affordability of their combos. Just a dog alone is $3.50, which seems a tad bit high to myself and others who I've mentioned it to. But throw in a cold can of Coca-Cola and a handful of Hawaiian style potato chips for another measly buck seventy-five, and for $5,25, you've got yourself a reasonably priced lunch situation.

The menu itself is economical in its scope, with only nine main choices, and a kids dog. Of course, one of those options is the "Naked Beach Dog", which is a bare dog you can then dress up with whichever two specialty condiments you'd like. These house made relishes and mustards are mainly fruit based and are really the main reason for Lavadog's existence. They inject the Hawaii into the core of its heart. Without these flavorful fruity sauces, they would just be some strip-mall joint slinging boring basic dogs.

Speaking of "naked beach", I have a sidetrack story. I've been to a nude beach once and only once. Years ago when I was living on Spokane's South Hill, my friend Grace and I decided it would simply be a riot to get dressed to the nines and visit Spokane's nude beach at the infamous People's Park. So I went and rented a tux for the day (it was a fairly cheap thing to do twenty years ago) and she put on a fabulous forest green velvet formal dress, donned diamond earrings and a pearl necklace, and put her gorgeous red hair in a beautiful updo. We packed a picnic basket full of brie, caviar and champagne and headed off to the park. 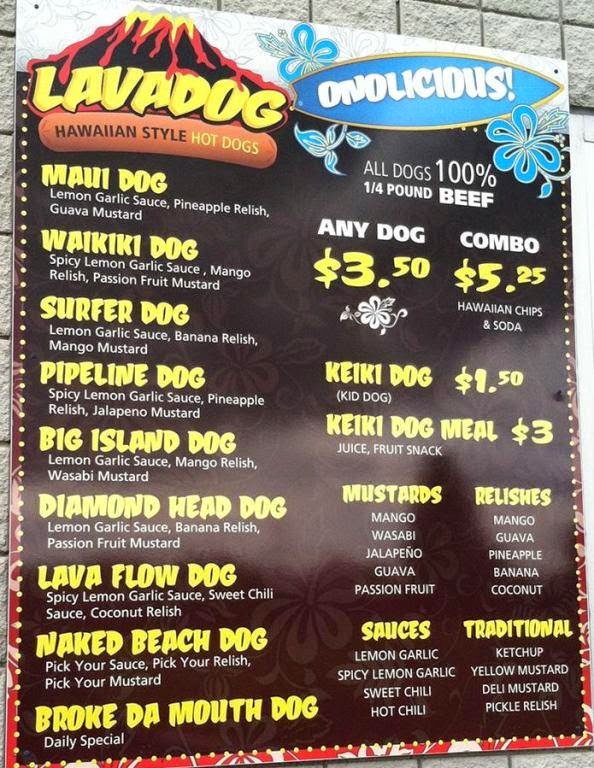 It was probably a hundred degrees out so every hippie in Peaceful Valley had decided to come down to the nude beach that day. Because of all the brush surrounding the beach, you don't actually see it until you get right to it, and as soon as we came through the bushes our eyeballs were assaulted with enough saggy old lady boobies and bouncing hippie balls to last for more than one lifetime. Still, we were determined, and although we were getting tilted heads, side glances, and shady looks from every direction, we laid our picnic blanket down bravely near the volleyball court, sat down and poured the champagne.

We were as hot and sweaty as gorillas wrapped in Tyvek, but overall it was quite a lovely experience once we got used to it and learned how to tune out the deflated genitalia flapping about around us. That is, until a rogue volleyball careened over from the volleyball court, knocked the champagne right out of Grace's hand and landed right in our caviar! Well, we were kinda okay with the caviar part because both of us realized that day that we don't much care for caviar, or at least the el cheapo version of it we had purchased at Rosauers for the occasion.

Anyway, you won't find caviar of any caliber on the menu at Lavadog. But you will find these sorts of things: lemon garlic sauce (spicy and regular), guava mustard, pineapple relish, guava relish, passionfruit mustard, and etc. Gary, my lunch partner, decided he wanted to go for sincerely spicy, so he chose the Naked Beach dog with hot chili sauce and jalapeno mustard.

As we were eating, I could see major tears welling up in the lower part of his eyeballs, and unless he was just extremely sensitive regarding the subject of our conversation (the weather), I knew the spice must have been flowing hard. "That's pretty hot", he said, shoving the final bite into his mouth. I was in the mood for a sweeter option, so I had chosen The Surfer Dog, with lemon garlic sauce, banana relish, and mango mustard.

We both agreed that our Lavadogs were generally quite tasty, with a couple of minor flaws. For one thing, there's almost too much going on in the bread department. The buns are fresh and lovely, but they are different than a regular bun you'd pick up in a package at Safeway. They're closest relative is a bagel bun in that it envelops the entire dog, with no slit or opening at all, except the hole at the the bottom end where the wiener slides in (sometimes it's hard to write a hot dog review without sounding a little dirty, isn't it?) It's a puffy, fluffy bun and it does throw off the meat-to-bread ration in a slightly noticeable way.

Also, they only gave us a few wee teaspoons each of the mustard and relish. They come on the side, served in those little 2 oz plastic cups, and each one was a little less than halfway full. Their dogs are pretty significant in size, and this was really not at all enough condiment quotient to work with.

Plus, with the bun being sealed, there was no way to really get the mustard and relish onto the hot dog in an efficient way. You either have to just smear it on top of the bun, which is way impractical and makes for messy eating, or attempt to dump what little there is inside the small bun opening, which doesn't really work because with such a little amount to work with, it would never get deep in there enough to become involved with every bite.

Similarly, the lemon garlic sauce seems to be piped into the bun before the dog is even inserted, so there's a huge glop of it on one end of the thing, but none on the end where the opening is, and no way to remedy this. INEFFICIENT! The Hawaiian chips were crispy and delicious (although there weren't a lot of them to speak of), and overall Lavadog made for a good, affordable lunch.

If they could just work out the minor glitches, they could be a real hot spot for Hayden. Not as hot as the nude beach in formal clothing on a hundred degree day, although with all of Lavadog's semi-beachy decor maybe I should show up there naked for lunch sometime soon. OKAY, I promise I won't.

Posted by Patrick Jacobs at 2:32 PM

Yeah, be careful with the owners at Lavadog. They are thief's and not to be trusted. They steal from businesses and are shady people, be careful before you eat a hotdot from Eric and Sabra.